From Wikipedia
https://en.wikipedia.org/wiki/Archimedean_spiral
Spiral with constant distance from itself 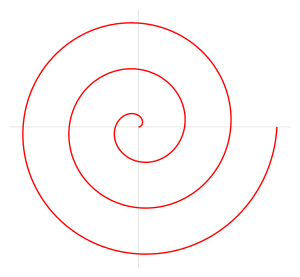 Three 360° loops of one arm of an Archimedean spiral

The Archimedean spiral (also known as the arithmetic spiral) is a spiral named after the 3rd-century BC Greek mathematician Archimedes. It is the locus corresponding to the locations over time of a point moving away from a fixed point with a constant speed along a line that rotates with constant angular velocity. Equivalently, in polar coordinates (r, θ) it can be described by the equation

From the above equation, it can thus be stated: position of particle from point of start is proportional to angle θ as time elapses.

Archimedes described such a spiral in his book On Spirals. Conon of Samos was a friend of his and Pappus states that this spiral was discovered by Conon. [1]

Derivation of general equation of spiral

A physical approach is used below to understand the notion of Archimedean spirals.

Suppose a point object moves in the Cartesian system with a constant velocity v directed parallel to the x-axis, with respect to the xy-plane. Let at time t = 0, the object was at an arbitrary point (c, 0, 0). If the xy plane rotates with a constant angular velocity ω about the z-axis, then the velocity of the point with respect to z-axis may be written as:

The above equations can be integrated by applying integration by parts, leading to the following parametric equations:

Its polar form is

Osculating circles of the Archimedean spiral, tangent to the spiral and having the same curvature at the tangent point. The spiral itself is not drawn, but can be seen as the points where the circles are especially close to each other.

Given the parametrization in cartesian coordinates

the arc length from

The total length from

The curvature is given by

The Archimedean spiral has the property that any ray from the origin intersects successive turnings of the spiral in points with a constant separation distance (equal to 2 πb if θ is measured in radians), hence the name "arithmetic spiral". In contrast to this, in a logarithmic spiral these distances, as well as the distances of the intersection points measured from the origin, form a geometric progression.

The Archimedean spiral has two arms, one for θ > 0 and one for θ < 0. The two arms are smoothly connected at the origin. Only one arm is shown on the accompanying graph. Taking the mirror image of this arm across the y-axis will yield the other arm.

For large θ a point moves with well-approximated uniform acceleration along the Archimedean spiral while the spiral corresponds to the locations over time of a point moving away from a fixed point with a constant speed along a line which rotates with constant angular velocity [2] (see contribution from Mikhail Gaichenkov).

As the Archimedean spiral grows, its evolute asymptotically approaches a circle with radius |v|/ω.

Mechanism of a scroll compressor

One method of squaring the circle, due to Archimedes, makes use of an Archimedean spiral. Archimedes also showed how the spiral can be used to trisect an angle. Both approaches relax the traditional limitations on the use of straightedge and compass in ancient Greek geometric proofs. [3]

Many dynamic spirals (such as the Parker spiral of the solar wind, or the pattern made by a Catherine's wheel) are Archimedean. For instance, the star LL Pegasi shows an approximate Archimedean spiral in the dust clouds surrounding it, thought to be ejected matter from the star that has been shepherded into a spiral by another companion star as part of a double star system. [10]