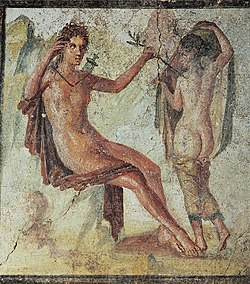 An antique fresco in Pompeii showing Apollo and Daphne

Apollo and Daphne is a story from ancient Greek mythology, retold by Hellenistic and Roman authors in the form of an amorous vignette.

Apollo, the Greek god of music, poetry, art, the sun, and a great warrior, mocked the god of love, Eros, for his use of bow and arrow, as Apollo is also patron of archery. “What are you doing with powerful weapons, naughty boy?” He said. "That equipment of yours is fitting of our shoulders, which are able to give certain wounds to wild animals, and to enemies, I who recently killed the swollen Python, who was pressing down so many acres with his disease-bearing belly, with countless arrows! You will be content to provoke some loves by your fire, not to lay claim to my honors.” This is the context behind the story.

The insulted Eros then prepared two arrows: one of gold and one of lead. He shot Apollo with the gold arrow, instilling in the god a passionate love for the river nymph Daphne. He shot Daphne with the lead arrow, instilling in her a hatred for Apollo. Having taken after Apollo’s sister, Artemis ( Diana), Daphne had spurned her many potential lovers, preferring instead woodland sports and exploring the forest. Due to her identity as an “aemula Phoebes” (female rival or emulator of Artemis), she had dedicated herself to perpetual virginity. Her father, the river god Peneus, demanded that she get married and give him grandchildren. She, however, begged her father to let her remain unmarried; he eventually complied.

Apollo continually followed her, begging her to stay, but the nymph continued to reject him. They were evenly matched in the race until Eros intervened, helping Apollo catch up to Daphne. Seeing that Apollo was bound to reach her, she called upon her father, "Help me, Peneus! Open the earth to enclose me, or change my form, which has brought me into this danger! Let me be free of this man from this moment forward!" And with that, Peneus answered her plead, and “a heavy numbness seizes her limbs; her soft breasts are surrounded by a thin bark, her hair changes into foliage, her arms change into branches; her foot, just now swift, now clings to sluggish roots.” She turned into a laurel tree.

In spite of Daphne's terror and fervent insistence that he leaves her alone, Apollo vowed to honor her forever: “Always my hair will have you, my lyres will have you, my quivers will have you, laurel tree. You will be present for the Latin leaders when a happy voice will sing a triumph and the Capitoline Hill will see long processions.”

Apollo also used his powers of eternal youth and immortality to render Daphne evergreen ("you also, wear always the perpetual honors of your foliage!"). For this reason, the leaves of the Bay laurel tree do not decay.

Apollo and Daphne in art 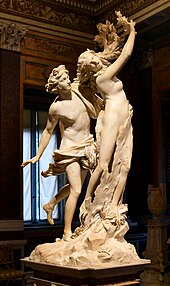 Between 1622 and 1625, Gian Lorenzo Bernini sculpted a Baroque life-sized marble statue entitled Apollo and Daphne. Apollo clutches Daphne's hip, pursuing her as she flees to escape him. Apollo wears a laurel crown, and Daphne is portrayed halfway through her metamorphosis into the laurel tree with her arms already transforming into its branches as she flees and calls to her father to save her from Apollo. [1]

The 18th century artist Giovanni Battista Tiepolo in c. 1743-1744 painted an oil similarly depicting Daphne just beginning her metamorphosis with Apollo in pursuit. It now hangs in the Louvre in Paris.

Artists such as Antonio del Pollaiuolo and his brother Piero often manipulated scenes from Greek mythology into the setting of their time periods.[ citation needed] In Pollaiolo's painting Apollo and Daphne, both are shown dressed in Renaissance garments, with Daphne in the midst of transforming into the laurel tree. It hangs in the National Gallery in London. [1]

It has been argued that The Kiss by Gustav Klimt is a painting symbolic of the kissing of Daphne by Apollo at the moment she is transformed into a laurel tree. [2] 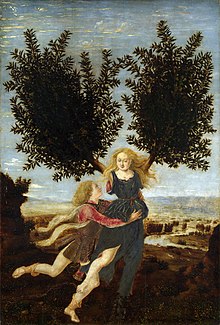 The myth of Apollo and Daphne has been examined as a battle between chastity (Daphne) and sexual desire (Apollo). As Apollo lustfully pursues Daphne, she is saved through her metamorphosis and confinement into the laurel tree which can be seen as an act of eternal chastity. Daphne is forced to sacrifice her body and become the laurel tree as her only form of escape from the pressures of Apollo's constant sexual desires. Apollo crafts himself a wreath out of her laurel branches and turning her symbol of chastity into a cultural symbol for him and other poets and musicians. [3]

In Ovid's Metamorphoses, Book I: Apollo and Daphne, Ovid uses animals to make the emotions of characters more relatable to the reader. Ovid characterizes Apollo's pursuit for Daphne as more animalistic than human, and creates the metaphor of a predator and its prey to show the connection between the two. Ovid writes, "sic agna lupum, sic cerva leonem, sic aquilam penna fugiunt trepidante columbae," meaning, "Thus a young lamb flees the wolf, thus the doe flees the lion, thus the dove flees the eagle, wing trembling." Each animal that is being preyed on is fleeing from its predator, and in each case the predator is as the stronger animal. The word "fugere" shows the urgency about and genuine fear of the predator. Ovid uses the word "fugiunt" in the present tense, showing that the prey is still fleeing its predator.[ original research?]

Ovid's use of animals allows us to truly understand exactly what is happening in the moments between Daphne and Apollo. He is able to relate the characteristics of the animals to the characters in his story. Ovid writes, “hostēs quaeque suōs” meaning, “each flees its own enemies”. This shows us the severity of the situation she is in; Daphne doesn’t just view Apollo as someone who is in love with her, but instead as an enemy. Ovid also continues on to write, “amor est mihi causa sequendi” meaning “love is the reason of following for me”. Continuing along with Ovid’s use of animals to portray Apollo and Daphne’s relationship, this quote allows us to see how Apollo is following Daphne. The word “following” brings a sense of stalking, as an animal would stalk its prey. Apollo claims that his reason for following is out of love, but the tone we get from it is like an animal stalking its prey out of hunger, as if without seizing this prey they will die.[ original research?]

Apollo expresses his concern of Daphne trying to get away. Ovid shows this when he writes, “moderatius, oro, curre fugamque inhibe,” meaning, “I ask you run more slowly and hold back flight." Ovid uses animalistic terms here by saying “flight." He wants Daphne to “hold back flight” which echoes the dove and the eagle in the previous lines.

In Metamorphoses, Ovid uses specific word orders to show Daphne's transformation from a woman to a tree. In the first line he uses a chiasmus, writing, "citaeque victa labore fugae," meaning, "and having been conquered by the work of swift flight" (543-544). The use of the chiasmus shows the reader how Daphne's body is no longer able to carry her, as she seems to have given into her exhaustion. Ovid uses the word order A-B-B-A with the B's being her body each A being the "citaeque fugae." This use of chiasmus allows us to imagine what is literally happening.[ original research?]

Another example of Ovid's specific word order is his use of a synchesis, which allows the author to rearrange the words from their natural word order, A-B-A-B. In line 549, Ovid uses a synchesis to describe the beginning process of Daphne turning into a tree. He does this to compare the beauty she once had to the harsh new form she takes as a tree. For example, "Mollia cinguntur tenui praecordia libro," meaning, "Her soft breasts are surrounded by a thin bark." He wants to show the contrast between her once "soft breasts" that represented beauty and youth to her now "thin bark," providing an image that is rough and undesirable. In this instance, Ovid also uses the sounds of the words to call attention to what is happening. By using the sounds /p/ and /t/, he is forcing the reader to slow down and read the scene more carefully due to the harsh consonants at the beginning of each word.[ original research?]

Ovid uses a specific word order in line 564, an unusual word placement by which he was able to continue the transformation of Daphne. The "tuebere" is among "mediamque. . . quercum," showing how Daphne is held in her beloved forests and will remain there due to "tuebere" being in the future tense. Ovid uses distinct word order throughout Daphne's transformation to emphasize the isolation and change within the end of the story. While he does use this type of word order earlier in the story there are many moments at the end where his use is obvious.[ original research?]