From Wikipedia
https://en.wikipedia.org/wiki/Antiprism
Polyhedron with parallel bases connected by triangles

In geometry, an n-gonal antiprism or n-antiprism is a polyhedron composed of two parallel direct copies (not mirror images) of an n-sided polygon, connected by an alternating band of 2n triangles. They are represented by the Conway notation An.

Antiprisms are a subclass of prismatoids, and are a (degenerate) type of snub polyhedron.

Antiprisms are similar to prisms, except that the bases are twisted relatively to each other, and that the side faces (connecting the bases) are 2n triangles, rather than n quadrilaterals.

At the intersection of modern-day graph theory and coding theory, the triangulation of a set of points have interested mathematicians since Isaac Newton, who fruitlessly sought a mathematical proof of the kissing number problem in 1694. [2] The existence of antiprisms was discussed and their name was coined by Johannes Kepler, though it is possible that they were previously known to Archimedes, as they satisfy the same conditions on faces and on vertices as the Archimedean solids.[ citation needed] According to Ericson and Zinoviev, HSM Coxeter (1907-2003) wrote at length on the topic, [2] and was among the first to apply the mathematics of Victor Schlegel to this field.

Knowledge in this field is "quite incomplete" and "was obtained fairly recently", i.e. in the 20th century. For example, as of 2001 it had been proven for only a limited number of non-trivial cases that the n-gonal antiprism is the mathematically optimal arrangement of 2n points in the sense of maximizing the minimum Euclidean distance between any two points on the set: in 1943 by László Fejes Tóth for 4 and 6 points (digonal and trigonal antiprisms, which are Platonic solids); in 1951 by Schütte and van der Waerden for 8 points (tetragonal antiprism, which is not a cube). [2]

The chemical structure of binary compounds has been remarked to be in the family of antiprisms; [3] especially those of the family of boron hydrides (in 1975) and carboranes because they are isoelectronic. This is a mathematically real conclusion reached by studies of X-ray diffraction patterns, [4] and stems from the 1971 work of Kenneth Wade, [5] the nominative source for Wade's rules of Polyhedral skeletal electron pair theory.

Rare earth metals such as the lanthanides form antiprismatic compounds with some of the halides or some of the iodides. The study of crystallography is useful here. [6] Some lanthanides, when arranged in peculiar antiprismatic structures with chlorine and water, can form molecule-based magnets. [7]

For an antiprism with regular n-gon bases, one usually considers the case where these two copies are twisted by an angle of 180/n degrees.

The axis of a regular polygon is the line perpendicular to the polygon plane and lying in the polygon centre.

For an antiprism with congruent regular n-gon bases, twisted by an angle of 180/n degrees, more regularity is obtained if the bases have the same axis: are coaxial; i.e. (for non- coplanar bases): if the line connecting the base centers is perpendicular to the base planes. Then the antiprism is called a right antiprism, and its 2n side faces are isosceles triangles.

A uniform n-antiprism has two congruent regular n-gons as base faces, and 2n equilateral triangles as side faces.

Cartesian coordinates for the vertices of a right n-antiprism (i.e. with regular n-gon bases and 2n isosceles triangle side faces) are:

if the n-antiprism is uniform (i.e. if the triangles are equilateral), then:

Let a be the edge-length of a uniform n-gonal antiprism; then the volume is:

and the surface area is:

The symmetry group of a right n-antiprism (i.e. with regular bases and isosceles side faces) is Dnd = Dnv of order 4n, except in the cases of:

The symmetry group contains inversion if and only if n is odd.

The rotation group is Dn of order 2n, except in the cases of:

Note: The right n-antiprisms have congruent regular n-gon bases and congruent isosceles triangle side faces, thus have the same (dihedral) symmetry group as the uniform n-antiprism, for n ≥ 4. 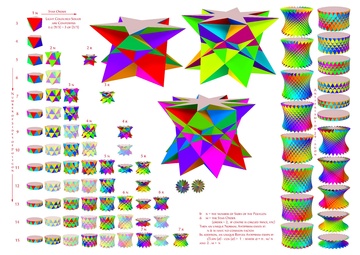 This shows all the non-star and star antiprisms up to 15 sides - together with those of an icosikaienneagon.
Further information: Prismatic uniform polyhedron

Uniform star antiprisms are named by their star polygon bases, {p/q}, and exist in prograde and in retrograde (crossed) solutions. Crossed forms have intersecting vertex figures, and are denoted by "inverted" fractions: p/(p – q) instead of p/q; example: 5/3 instead of 5/2.

Any star antiprism with regular convex or star polygon bases can be made a right star antiprism (by translating and/or twisting one of its bases, if necessary).

In the retrograde forms but not in the prograde forms, the triangles joining the convex or star bases intersect the axis of rotational symmetry. Thus:

Also, star antiprism compounds with regular star p/q-gon bases can be constructed if p and q have common factors. Example: a star 10/4-antiprism is the compound of two star 5/2-antiprisms.