From Wikipedia
https://en.wikipedia.org/wiki/Animal_and_Plant_Health_Inspection_Service
This article is about a division of the United States Department of Agriculture. For agriculture extensions in general, see Agricultural extension.
USDA's Animal, Plant Health Inspectors

The Animal and Plant Health Inspection Service (APHIS) is an agency of the United States Department of Agriculture (USDA) based in Riverdale, Maryland responsible for protecting animal health, animal welfare, and plant health. APHIS is the lead agency for collaboration with other agencies to protect U.S. agriculture from invasive pests and diseases. APHIS's PPQ is the National Plant Protection Organization for the U.S., [8] and the agency's head of veterinary services/veterinary Deputy Administrator is the Chief Veterinary Officer of the United States. [5]

The origins of the agency predate creation of USDA, to 1854 when the Office of Entomologist, Agricultural Section, U.S. Patent Office was created. It was the first of three agencies that eventually were merged to form APHIS. [2] In 1881, a Cattle Commission was created in the Department of the Treasury that three years later was transferred to USDA. [2] Plant quarantine functions followed in 1912 when USDA's Federal Horticultural Board was created. Between the 1880s and 1930s, these evolved into the USDA Bureaus of Entomology, of Animal Industry, and of Plant Quarantine, respectively. [2]

In 1953, those three bureaus were made into the new Agricultural Research Service. [1] In 1971, the animal and plant regulatory functions were separated from ARS to create a new entity known as Animal and Plant Health Services. In 1972, the meat and poultry inspection divisions of the Consumer and Marketing Service (later known as the Agricultural Marketing Service) were added to APHS, thus creating the contemporary APHIS. [9] [1]

In 2003, many APHIS agricultural border inspectors were transferred to U.S. Customs and Border Protection, a unit of the newly created U.S. Department of Homeland Security.

APHIS is the primary agency responsible for responding to animal and plant disease(s) and pest emergencies as well as to other emergencies as set forth by the National Response Plan (NRP) completed in 2005 (APHIS Strategic Plan 2003–2008).[ citation needed] 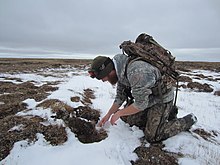 The originally-stated purpose of APHIS is to “protect the animal and plant resources of the nation” and carry out “a poultry and meat inspection program.” [11] A more modern articulation of APHIS's mission is “protecting and promoting U.S. agricultural health, regulating genetically engineered organisms, administering the Animal Welfare Act and carrying out wildlife damage management activities.” [12]

APHIS aims to protect American animals, plants, and the agricultural industry by offering:

The threats and challenges within APHIS' scope include:

Animal Welfare Act of 1966, 7 U.S.C.  § 2131 et seq. Originally intended to prevent the theft of pets for sale to research facilities, the AWA now broadly regulates minimum standards of care and treatment of animals in research, exhibition, transport, and by dealers. It exempts birds, rats, or mice bred for use in research, horses not used for research, cold blooded animals, and all farm animals used in the production of “food and fiber.” It provides for licensing and registration of all animal dealers and exhibitors.

Horse Protection Act, 15 U.S.C.  §§ 1821– 1831 Prohibits horses subjected to a process called “soring” (injecting or applying chemicals to a horse's forelegs to accentuate its gait) from participating in and being transported to exhibitions, sales, shows, or auctions.

Animal Damage Control Act of March 2, 1931, 7 U.S.C.  §§ 426– 426c Provides broad authority for investigation, demonstrations and control of “injurious animal species” (mammalian predators, rodents and birds.) Amended in 1991 to prevent the inadvertent introduction of brown tree snakes into other areas of the United States from Guam.

Lacey Act, 16 U.S.C.  §§ 3371– 3378 Makes it unlawful for any person to import, export, transport, sell, receive, acquire, or purchase any fish or wildlife or plant taken, possessed, transported, or sold in violation of any law, treaty, or regulation of the United States or in violation of any Indian tribal law whether in interstate or foreign commerce.

Honeybee Act, 7 U.S.C.  §§ 281– 286 Prohibits or restricts the importation or entry of honeybees and honeybee semen into or through the United States in order to prevent the introduction and spread of diseases and parasites harmful to honeybees, as well as genetically undesirable germ plasm and undesirable bee species.

Animal quarantine laws: 21 U.S.C.  § 101 allows the President, by proclamation, to suspend the importation of all or any class of animals for a limited time, whenever, in his opinion, it is necessary for the protection of animals in the United States against infectious or contagious diseases.

21 U.S.C.  § 113a authorizes the Secretary of Agriculture to establish research facilities for hoof and mouth disease and other animal diseases which “in the opinion of the Secretary” constitute a threat to U.S. livestock. Mandates strict controls for the use of any live virus at such research facilities. Permits the Secretary to hire up to five technical experts or scientists at a maximum paygrade of GS-18. (This appears to be one of the most prescriptive statutes that USDA administers.)

21 U.S.C.  § 114i authorizes the Secretary of Agriculture to establish and carry out a program for the eradication of pseudorabies in United States swine populations.

In addition to its domestic operations, APHIS International Services staff several overseas offices, including veterinary and plant health attachés in U.S. diplomatic missions as well as technicians carrying out disease and pest eradication and control programs.

As the name suggests, IES takes referrals from other APHIS personnel as to investigations and enforcements that are needed based on personnel's observations in the course of their duties. [6] [7]

APHIS has a budget of approximately $800 million annually and employs about 7,000 people, about 5,000 of which are deployed as inspectors at ports, borders and on farms.[ citation needed]

In 2005, the USDA OIG published a report which identified numerous failures on the part of APHIS’ Animal Care (AC) unit to adequately enforce the AWA, including:

The OIG audit further reported that at almost one-third of facilities, IACUCs failed to ensure that principal investigators (PIs) considered alternatives to painful procedures; the report cites this failure on the part of IACUCs as being the most frequent AWA violation at animal research facilities. [16]

In 2014, The USDA's Office of the Inspector General (OIG) criticized the Service for a number of issues including its failure to efficiently allocate resources and its failure to administer appropriate fines for animal welfare violations among other issues. The report found the Service conducted inspections at facilities that did not have any animals regulated under the Animal Welfare Act (AWA). According to the report, “[Animal Care] did not make the best use of its limited resources, which could have been assigned to inspect other more problematic facilities, including breeders, dealers, and exhibitors.” The Service was also criticized for prematurely closing cases that involved “grave (e.g., animal deaths) or repeat welfare violations.” When the service did levy fines against institutions for AWA violations, the Inspector General's report found “penalties that were reduced by an average of 86 percent from... authorized maximum penalty per violation. Consequently, 26 of the 30 violators in our sample received” and that the Service “grant[ed] good faith reductions without merit or us[ed] a smaller number of violations than the actual number.” According to the USDA's report, APHIS agreed with the findings and will begin implanting reforms. [17]

On 4 February 2017, the USDA Animal Care Search Tool, a searchable database containing documents with details about the animals held by individual US animal research facility together with inspection and action reports, was removed from public access, with a stated reason of protecting personal information. The removal affects inspection reports, research facility annual reports, regulatory correspondence (such as official warnings), and certain enforcement records. Information from these documents can now only be requested via a Freedom of Information Act inquiry. [18] This removal has been criticized as substantially limiting information on animal care in US institutions, and of inhibiting access to what is still available. [19]