Anderson County is a county in the U.S. state of Tennessee. It is located in the northern part of the state in East Tennessee. As of the 2020 census, its population was 77,123. [2] Its county seat is Clinton. [3] Anderson County is included in the Knoxville, TN Metropolitan Statistical Area.

Before the formation of Anderson County, Tennessee, that territory was initially land of what is today called the Eastern Band of Cherokee Indians, which had been settled by several pioneer families including the Wallace, Gibbs, Freels, Frost and Tunnell families. Although the Treaty of Holston, signed in 1791, was intended as a negotiation with the Cherokee to prohibit settlement of the area including what is today Anderson County, the treaty became ineffective as more settlers moved through the Appalachian Mountains from Virginia and North Carolina into Tennessee. The flooding of white settlers into the Indian domain was cause for several skirmishes, which eased after the Treaty of Tellico in 1798 (with an origination point for relinquished land from the Cherokee being the Tellico Blockhouse) allowed for greater ease in settling the area. [4]

Like many East Tennessee counties, the residents of Anderson County were largely opposed to secession on the eve of the Civil War. On June 8, 1861, Anderson Countians voted against Tennessee's Ordinance of Secession, 1,278 to 97. [6]

The construction of Norris Dam, the first dam built by the Tennessee Valley Authority, brought major changes to the county in the 1930s. Approximately 2900 families were relocated from reservoir lands in Anderson and nearby counties during the construction, which began in 1933 and was completed in 1936. The town of Norris was initially built as a planned community to house the workers involved in the construction of this dam. As a result of the dam completion and operation, the temperature of the downstream Clinch River bed changed, so that a former pearl industry which had been successful for many years evaporated as the mussels, once prevalent in the river, were not able to sustain life in the changed climate.

During World War II, the federal government's Manhattan Project brought more change to the county, including the displacement of more families and the founding of Oak Ridge.

The Museum of Appalachia in Norris commemorates pioneer and rural life of past decades in Anderson County and the surrounding region. It is also an antique shop that sells artifacts from the times of the first settlers to the times of the Coal Creek War

Anderson County has a thriving tourism industry, thanks to major attractions such as Norris Lake, the Museum of Appalachia, and American Museum of Science and Energy, and the county is considered a part of the Norris Highlands. 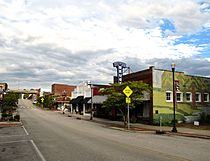 Anderson County is a Republican stronghold. The last Democrat to carry this county was Bill Clinton in 1996.