From Wikipedia
https://en.wikipedia.org/wiki/Amber_(color)
Color term midway between the colors of gold and orange 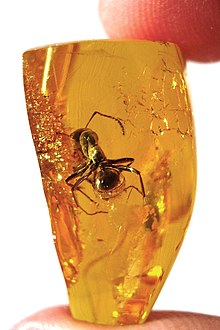 The color amber is a pure chroma color, located on the color wheel midway between the colors of yellow and orange. The color name is derived from the material also known as amber, which is commonly found in a range of yellow-orange-brown-red colors; likewise, as a color amber can refer to a range of yellow-orange colors. In English, the first recorded use of the term as a color name, rather than a reference to the specific substance, was in 1500. [1]

Amber is one of several technically defined colors used in automotive signal lamps. In North America, SAE standard J578 governs the colorimetry of vehicle lights, [2] while outside North America the internationalized European ECE regulations hold force. [3] Both standards designate a range of orange-yellow hues in the CIE color space as "amber".

In the past, the ECE amber definition was more restrictive than the SAE definition, but the current ECE definition is identical to the more permissive SAE standard. The SAE formally uses the term "yellow amber", though the color is most often referred to as "yellow". This is not the same as selective yellow, a color used in some fog lamps and headlamps.

Previously, ECE amber was defined according to the 1968 Convention on Road Traffic, [4] as follows:

Recent revisions to the ECE regulations have aligned ECE Amber with SAE Yellow, defined as follows:

The entirety[ clarification needed] of these definitions lie outside the gamut of the sRGB color space — such a pure color cannot be represented using RGB primaries. The color box shown above is a desaturated approximation, produced by taking the centroid of the standard definition and moving it towards the D65 white point, until it meets the sRGB gamut triangle.[ citation needed]

These pendants made of amber are also amber-colored 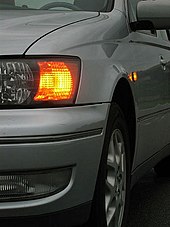