From Wikipedia
https://en.wikipedia.org/wiki/Algebraic_number
Not to be confused with Algebraic solution.
Complex number that is a root of a non-zero polynomial in one variable with rational coefficients 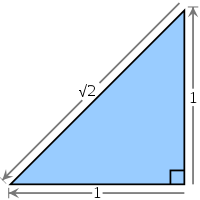 The square root of 2 is an algebraic number equal to the length of the hypotenuse of a right triangle with legs of length 1.

An algebraic number is a number that is a root of a non-zero polynomial in one variable with integer (or, equivalently, rational) coefficients. For example, the golden ratio,

, is an algebraic number, because it is a root of the polynomial x2 − x − 1. That is, it is a value for x for which the polynomial evaluates to zero. As another example, the complex number

All integers and rational numbers are algebraic, as are all roots of integers. Real and complex numbers that are not algebraic, such as π and e, are called transcendental numbers.

The set of algebraic numbers is countably infinite and has measure zero in the Lebesgue measure as a subset of the uncountable complex numbers. In that sense, almost all complex numbers are transcendental.

The set of real algebraic numbers itself forms a field. [6]

Any number that can be obtained from the integers using a finite number of additions, subtractions, multiplications, divisions, and taking (possibly complex) nth roots where n is a positive integer are algebraic. The converse, however, is not true: there are algebraic numbers that cannot be obtained in this manner. These numbers are roots of polynomials of degree 5 or higher, a result of Galois theory (see Quintic equations and the Abel–Ruffini theorem). For example, the equation:

has a unique real root that cannot be expressed in terms of only radicals and arithmetic operations.

Therefore, the algebraic integers constitute a proper superset of the integers, as the latter are the roots of monic polynomials x − k for all