From Wikipedia
https://en.wikipedia.org/wiki/Alfonso_Cuarón
Mexican filmmaker
"Cuarón" redirects here. For other people with the surname, see Cuarón (surname).
In this Spanish name, the first or paternal surname is Cuarón and the second or maternal family name is Orozco.

Cuarón has received 10 Academy Award nominations, winning four including Best Director for Gravity and Roma, Best Film Editing for Gravity, and Best Cinematography for Roma. He is the first Mexico-born filmmaker to win the Best Director award, [5] and one of only four people to have been nominated for Academy Awards in six different categories.

Alfonso Cuarón Orozco was born in Mexico City, the son of Alfredo Cuarón, a doctor specializing in nuclear medicine, and Cristina Orozco, a pharmaceutical biochemist. [6] He has two brothers, Carlos, also a filmmaker, [7] and Alfredo, a conservation biologist.[ citation needed] Cuarón studied philosophy at the National Autonomous University of Mexico (UNAM) and filmmaking at CUEC ( Centro Universitario de Estudios Cinematográficos), [8] a school within the same university. There he met the director Carlos Marcovich and cinematographer Emmanuel Lubezki, [8] and they made what would be his first short film, Vengeance Is Mine.[ citation needed] 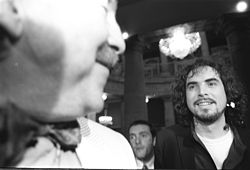 Cuarón at the Festival Internacional de Cine en Guadalajara in 1998.

Cuarón began working on television in Mexico, first as a technician and then as a director. His television work led to assignments as an assistant director for several film productions including La Gran Fiesta, Gaby: A True Story and Romero, and in 1991 he landed his first big-screen directorial assignment.

In 1991, Cuarón directed Sólo con tu pareja, a sex comedy about a womanizing businessman (played by Daniel Giménez Cacho) who, after having sex with an attractive nurse, is fooled into believing he's contracted AIDS. In addition to writing, producing and directing, Cuarón co-edited the film with Luis Patlán. [9] The film, which also starred cabaret singer Astrid Hadad and model/actress Claudia Ramírez (with whom Cuarón was linked between 1989 and 1993) was a big hit in Mexico. After this success, director Sydney Pollack hired Cuarón to direct an episode of Fallen Angels, a series of neo-noir stories produced for the Showtime premium cable network in 1993; other directors who worked on the series included Steven Soderbergh, Jonathan Kaplan, Peter Bogdanovich, and Tom Hanks. 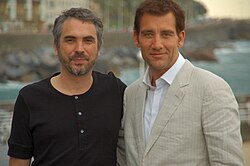 Cuarón and Clive Owen, who worked together on Children of Men.

In 2001, Cuarón found himself returning to Mexico with a Spanish-speaking cast to film Y tu mamá también, starring Gael García Bernal, Diego Luna and Maribel Verdú. It was a provocative and controversial road comedy about two sexually obsessed teenagers who take an extended road trip with an attractive married woman who is much older than them. The film's open portrayal of sexuality and frequent rude humor, as well as the politically and socially relevant asides, made the film an international hit and a major success with critics. Cuarón shared an Academy Award nomination for Best Original Screenplay with co-writer and brother Carlos Cuarón.

In 2004, Cuarón directed the third film in the successful Harry Potter series, Harry Potter and the Prisoner of Azkaban. Cuarón faced criticism at the time from some Harry Potter fans for his approach to the film, notably its tendency to take more creative liberties with the source material than its predecessors. However, author J. K. Rowling, who had seen and loved Cuarón's film Y tu mamá también, said that it was her personal favorite from the series so far. [10] Critically, the film was also better received than the first two installments, with some critics remarking its new tone and for being the first Harry Potter film to truly capture the essence of the novels. [11] It has been subsequently rated by audience polls and critics as the best of the movie franchise series.

He created the production and distribution company Esperanto Filmoj ("Esperanto Films", named because of his support for the international language Esperanto [12]), which has credits in the films Duck Season, Pan's Labyrinth, and Gravity.

Cuarón also directed the controversial public service announcement "I Am Autism" for Autism Speaks that was criticized by disability rights groups for its negative portrayal of autism. [13] 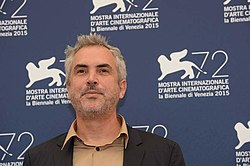 In 2010, Cuarón began to develop the film Gravity, a drama set in space. He was joined by producer David Heyman, with whom Cuarón worked on Harry Potter and the Prisoner of Azkaban. Starring Sandra Bullock and George Clooney, the film opened the 70th Venice International Film Festival in August. The film was then released in America in October 2013 [14] The film became financial success earning 723.2 million of the box office against a budget of 130 million. [15] The film also received many awards nominations. For the film, he received the Golden Globe Award in the category of Best Director. The film received ten Academy Award nominations, including Best Picture and Best Director. Cuarón won for Best Directing, becoming the first Latin American to win the award, [16] while he and Mark Sanger received the award for Best Film Editing. [17]

In 2013, Cuarón created Believe, a science fiction/fantasy/adventure series that was broadcast as part of the 2013–14 United States network television schedule on NBC as a mid-season entry. The series was created by Cuarón for Bad Robot Productions and Warner Bros. Television. In 2014, Time placed him in its list of " 100 Most Influential People in the World" – Pioneers. [18]

In May 2015, Cuarón was announced as the President of the Jury for the 72nd Venice International Film Festival. [19]

Production began in fall 2016 for Cuarón's eighth film, Roma, a tale of a housekeeper for a middle class Mexican family in 1970s Mexico City, based on the life of his family's longtime maid, Liboria Rodríguez. [20] The project was produced by Cuarón, Gabriela Rodríguez and Nicolás Celis and starred Yalitza Aparicio and Marina de Tavira both of whom received Oscar nominations. The film debuted at 75th Venice International Film Festival, where it won the Golden Lion, [21] and was distributed to select Mexican and American theaters before its online release on Netflix. Roma was highly acclaimed upon release; among its accolades are two Golden Globes (Best Foreign Language Film and Best Director for Cuarón) and three Academy Awards (Best Director, Best Foreign Language Film, and Best Cinematography for Cuarón) out of a leading ten nominations. [22] [23] In 2019, Cuaron signed an overall TV deal at Apple. [24] His first TV show under an overall deal with Apple was the show Disclaimer, which was to star Cate Blanchett and Kevin Kline. [25]

Cuarón's films seem to seep with his many signature visual, thematic, and structural elements. Most notable is the director's use of long takes and his constantly moving camera. These tendencies create the feeling of real time and real space within the worlds that Cuarón explores in his films. Elaborating on this the director states, "For Children of Men, we wanted to take advantage of the element of real time. It's a documentary approach. As if you were just following characters around with your own digital camera in the year 2027." This documentary approach grounds the sometimes fantastical and otherworldly settings the director traverses in films such as Harry Potter and the Prisoner of Azkaban and Gravity. In his films, camera movement acts as an extension of character emotion. Whether employing handheld, steadicam or robotic arm, Cuarón uses the tools of cinematography to create an intense, symbiotic relationship between viewer and onscreen action. [26]

Cuarón's first marriage was to Mariana Elizondo with whom he has a son, Jonás Cuarón, born in 1981. Jonás Cuarón is also a film director, known for Year of the Nail and Desierto. [30] Alfonso Cuarón's second marriage, from 2001 to 2008 was to Italian actress and freelance journalist Annalisa Bugliani, with whom he has two children. [30]

In 2009, Cuarón signed a petition which called for the release of film director Roman Polanski, who was arrested in Switzerland in relation to his 1977 charge for drugging and raping a 13-year-old girl. [32] [33] [34]