From Wikipedia
https://en.wikipedia.org/wiki/Aerospace_engineering
Branch of engineering

"Aeronautical engineering" was the original term for the field. As flight technology advanced to include vehicles operating in outer space, the broader term " aerospace engineering" has come into use. [4] Aerospace engineering, particularly the astronautics branch, is often colloquially referred to as "rocket science". [5] [a]

Flight vehicles are subjected to demanding conditions such as those caused by changes in atmospheric pressure and temperature, with structural loads applied upon vehicle components. Consequently, they are usually the products of various technological and engineering disciplines including aerodynamics, Air propulsion, avionics, materials science, structural analysis and manufacturing. The interaction between these technologies is known as aerospace engineering. Because of the complexity and number of disciplines involved, aerospace engineering is carried out by teams of engineers, each having their own specialized area of expertise. [7]

The origin of aerospace engineering can be traced back to the aviation pioneers around the late 19th to early 20th centuries, although the work of Sir George Cayley dates from the last decade of the 18th to mid-19th century. One of the most important people in the history of aeronautics [8] and a pioneer in aeronautical engineering, [9] Cayley is credited as the first person to separate the forces of lift and drag, which affect any atmospheric flight vehicle. [10]

Early knowledge of aeronautical engineering was largely empirical, with some concepts and skills imported from other branches of engineering. [11] Some key elements, like fluid dynamics, were understood by 18th-century scientists.[ citation needed]

In December 1903, the Wright Brothers performed the first sustained, controlled flight of a powered, heavier-than-air aircraft, lasting 12 seconds. The 1910s saw the development of aeronautical engineering through the design of World War I military aircraft.

Between World Wars I and II, great leaps were made in the field, accelerated by the advent of mainstream civil aviation. Notable airplanes of this era include the Curtiss JN 4, the Farman F.60 Goliath, and Fokker Trimotor. Notable military airplanes of this period include the Mitsubishi A6M Zero, the Supermarine Spitfire and the Messerschmitt Bf 109 from Japan, United Kingdom, and Germany respectively. A significant development in aerospace engineering came with the first operational Jet engine-powered airplane, the Messerschmitt Me 262 which entered service in 1944 towards the end of the second World War. [12]

The first definition of aerospace engineering appeared in February 1958, [4] considering the Earth's atmosphere and outer space as a single realm, thereby encompassing both aircraft (aero) and spacecraft (space) under the newly coined term aerospace.

In response to the USSR launching the first satellite, Sputnik, into space on October 4, 1957, U.S. aerospace engineers launched the first American satellite on January 31, 1958. The National Aeronautics and Space Administration was founded in 1958 as a response to the Cold War. In 1969, Apollo 11, the first human space mission to the moon took place. It saw three astronauts enter orbit around the Moon, with two, Neil Armstrong and Buzz Aldrin, visiting the lunar surface. The third astronaut, Michael Collins, stayed in orbit to rendezvous with Armstrong and Aldrin after their visit. [13] 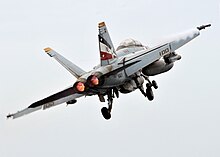 An important innovation came on January 30, 1970, when the Boeing 747 made its first commercial flight from New York to London. This aircraft made history and became known as the "Jumbo Jet" or "Whale" [14] due to its ability to hold up to 480 passengers. [15]

On October 25, 2007, the Airbus A380 made its maiden commercial flight from Singapore to Sydney, Australia. This aircraft was the first passenger plane to surpass the Boeing 747 in terms of passenger capacity, with a maximum of 853. Though development of this aircraft began in 1988 as a competitor to the 747, the A380 made its first test flight in April 2005. [18] 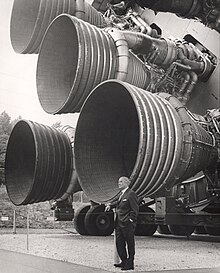 Wernher von Braun, with the F-1 engines of the Saturn V first stage at the US Space and Rocket Center 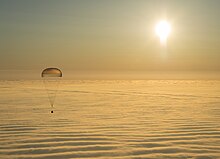 Some of the elements of aerospace engineering are: [19] [20]

The basis of most of these elements lies in theoretical physics, such as fluid dynamics for aerodynamics or the equations of motion for flight dynamics. There is also a large empirical component. Historically, this empirical component was derived from testing of scale models and prototypes, either in wind tunnels or in the free atmosphere. More recently, advances in computing have enabled the use of computational fluid dynamics to simulate the behavior of the fluid, reducing time and expense spent on wind-tunnel testing. Those studying hydrodynamics or hydroacoustics often obtain degrees in aerospace engineering.

A background in chemistry, physics, computer science and mathematics is important for students pursuing an aerospace engineering degree. [22]

The term " rocket scientist" is sometimes used to describe a person of great intelligence since rocket science is seen as a practice requiring great mental ability, especially technically and mathematically. The term is used ironically in the expression "It's not rocket science" to indicate that a task is simple. [23] Strictly speaking, the use of "science" in "rocket science" is a misnomer since science is about understanding the origins, nature, and behavior of the universe; engineering is about using scientific and engineering principles to solve problems and develop new technology. [5] [6] The more etymologically correct version of this phrase would be "rocket engineer". However, "science" and "engineering" are often misused as synonyms. [5] [6] [24]