Act of the Re-Establishment of the State of Lithuania Information

From Wikipedia
https://en.wikipedia.org/wiki/Act_of_the_Re-Establishment_of_the_State_of_Lithuania
1990 declaration of independence from the Soviet Union by Lithuania 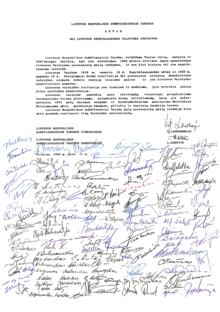 After the partitions of the Polish–Lithuanian Commonwealth in the 18th century, Lithuania was part of the Russian Empire. In the aftermath of the Russian Revolution of 1917, the Council of Lithuania, chaired by Jonas Basanavičius, proclaimed the Act of Independence of Lithuania on February 16, 1918. Lithuania enjoyed independence for two decades. In August 1939, the Soviet Union and Nazi Germany signed the Molotov–Ribbentrop Pact dividing Eastern Europe into spheres of influence. The Baltic states (Lithuania, Latvia, and Estonia) were assigned to the Soviet sphere of influence and subsequently were occupied in June 1940 and converted into soviet socialist republics.

In Lithuania's case, President Antanas Smetona left the country rather than accept the occupation. He did not resign but turned over his presidential duties to Prime Minister Antanas Merkys as per the constitution. The next day, Merkys declared himself president in his own right. The cabinet confirmed Merkys in office, claiming that Smetona had effectively resigned by leaving the country.

Two days later, under Soviet pressure, Merkys appointed Justas Paleckis, a left-wing journalist and longtime opponent of the Smetona regime, as prime minister. Merkys then resigned at Moscow's insistence, making Paleckis acting president as well. The Soviets then used the Paleckis government to give the final Soviet takeover the appearance of legality.

The Paleckis government staged a heavily rigged election for a " People's Seimas," in which voters were presented with a single Communist-dominated list. The newly elected People's Seimas met on July 21 with only one piece of business–a resolution declaring Lithuania a Soviet republic and petitioning for admission to the Soviet Union, which carried unanimously. The Soviet Union duly "approved" the request on August 3. Since then, Soviet sources have maintained that Lithuania's petition to join the Soviet Union marked the culmination of a Lithuanian socialist revolution, and thus represented the legitimate desire of the Lithuanian people to join the Soviet Union.

The Soviet authorities undertook Sovietization policies: nationalization of all private property, collectivization of agriculture, suppression of the Catholic Church, and the imposition of totalitarian control. At the same time, free education and free national health system were also introduced. The armed anti-Soviet partisans were liquidated by 1953. Approximately 130,000 Lithuanians, dubbed " enemies of the people", were deported into Siberia (see June deportation and March deportation). After the death of Joseph Stalin in 1953, the Soviet Union adopted de-Stalinization policies and ended mass persecutions. Nonviolent resistance continued both in Lithuania and among the Lithuanian diaspora. These movements were secret, illegal, and more focused on social issues, human rights, and cultural affairs rather than political demands. 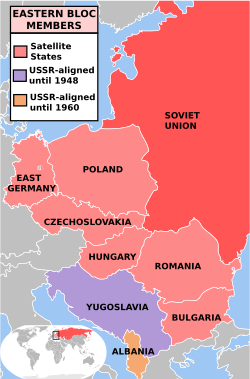 Map of the Eastern Bloc

As Mikhail Gorbachev attempted to revive the economy of the Soviet Union, he introduced glasnost (openness) and perestroika (restructuring).

Gorbachev's political agenda went for great and deep changes within the Soviet government, as such, Gorbachev invited the Soviet public into open and public discussions unseen before.

For the Soviet Lithuanian dissidents and activists, it was a golden opportunity not to be missed, to bring their movements from underground into the public life.

On August 23, 1987 (the 48th anniversary of the Molotov–Ribbentrop Pact), the Lithuanian Liberty League organized the first public protest rally that did not result in arrests.

Encouraged by the non arrests, by mid- 1988, a group of 35 intellectuals organized the Sąjūdis Reform Movement with the original goal of supporting, discussing, and implementing Gorbachev's reforms yet short of openly supporting independence from the USSR.

However, Sąjūdis grew in popularity, attracting large crowds to rallies in Vingis Park and therefore radicalizing its agenda, taking advantage of Gorbachev's passiveness.

In 1989, Sąjūdis, not afraid of angering Moscow and causing a violent crackdown, continuously pushed further with its demands: from limited discussions on Gorbachev's reforms, to demand greater say in economic decisions, to political autonomy within the Soviet Union.

By the time of the Baltic Way, a human chain spanning over 600 kilometres (370 mi) across the three Baltic states to mark the 50th anniversary of the Molotov–Ribbentrop Pact, the official goal of Sąjūdis was now independence for Lithuania.

Similar processes happened in other Soviet republics during 1988-1991, collectively known as the " parade of sovereignties" , which were the major factor contributing to the collapse of the Soviet Union.

Parliamentary elections of February 1990 were the first free and democratic elections in Lithuania since 1926. The voters overwhelmingly voted for the candidates endorsed by Sąjūdis, even though the movement did not run as a political party. The result was the first post-war non-communist government. During its first assembly on March 11, 1990, the Supreme Soviet of the Lithuanian SSR elected Vytautas Landsbergis as its chairman and restored Lithuania's prewar name of the Republic of Lithuania. It then changed its name to the Supreme Council of the Republic of Lithuania, and formally declared the re-establishment of Lithuanian independence. The act was approved at 10:44 pm by 124 members of the council while six abstained. [1] There were no votes against.

SUPREME COUNCIL OF THE REPUBLIC OF LITHUANIA

On the Re-establishment of the State of Lithuania

The Supreme Council of the Republic of Lithuania, expressing the will of the nation, decrees and solemnly proclaims that the execution of the sovereign powers of the State of Lithuania abolished by foreign forces in 1940, is re-established, and henceforth Lithuania is again an independent state.

The Act of Independence of February 16, 1918 of the Council of Lithuania and the Constituent Assembly decree of May 15, 1920 on the re-established democratic State of Lithuania never lost their legal effect and comprise the constitutional foundation of the State of Lithuania.

The territory of Lithuania is whole and indivisible, and the constitution of no other State is valid on it.

The State of Lithuania stresses its adherence to universally recognized principles of international law, recognizes the principle of inviolability of borders as formulated in the Final Act of the Conference on Security and Co-operation in Europe in Helsinki in 1975, and guarantees human, civil, and ethnic community rights.

The Supreme Council of the Republic of Lithuania, expressing sovereign power, by this Act begins to realize the complete sovereignty of the state. [2]

The Supreme Council took the line that Lithuania's original declaration of independence in 1918 was still valid, and considered the Act to be a reassertion of an independence that still legally existed under international law. It was based on the premise that Smetona never resigned, and Merkys' takeover of the presidency was illegal and unconstitutional. Lithuania's official position on the matter since then has been that all subsequent acts leading up to the Soviet annexation were ipso facto void.

Leaders of the Supreme Council of Lithuania on 11 March 1990, after the promulgation of the Act of the Re-Establishment of the State of Lithuania 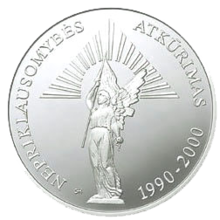 Litas commemorative coin dedicated to the 10th anniversary of Independence

The Act of the Re-Establishment of the State of Lithuania served as a model and inspiration to other Soviet republics. However, the issue of independence was not immediately settled and recognition by other countries was not certain.

Mikhail Gorbachev called the Act of Independence illegal and the USSR demanded revocation of the Act and began applying sanctions against Lithuania including an economic blockade. In addition, on January 13, 1991 Soviet forces stormed the LRT building in Vilnius along with the Vilnius TV Tower. Unarmed civilian Lithuanians confronted Soviet soldiers. Fourteen people were killed and seven hundred injured in what became known as January Events.

The Icelandic parliament recognised Lithuania's declaration of independence in February 1991 by reaffirming Iceland's 1922 recognition, thus becoming the first nation outside the Soviet Union to do so

On February 11, 1991, the Icelandic parliament voted to confirm that Iceland's 1922 recognition of Lithuanian independence was still in full effect, as it never formally recognized the Soviet Union's control over Lithuania, [4] and that full diplomatic relations should be established as soon as possible. [5] [6] They were followed by Denmark, Slovenia and Croatia (within Yugoslavia) and Latvia.

After the failed August Coup, Lithuanian independence recognition was reconfirmed by the United States on September 2.

President George H. W. Bush announced that if the Soviet Union were to use armed force against Lithuania, the U.S. would react accordingly.

Finally, on September 6, 1991 Lithuania's independence was recognized by the Soviet Union.

Then recognition of Lithuania's independence was quickly followed by several countries including China, India and Belarus as well as Turkmenistan and Uzbekistan.

On September 17, 1991, it was welcomed as a member of the United Nations along with Estonia and Latvia.

Since 2004, Lithuania along with Estonia and Latvia have become members of the European Union and NATO. The country eventually banned displays of Soviet and Nazi symbols in 2008.