From Wikipedia, the free encyclopedia
British biophysicist and chemist (1926–2018) 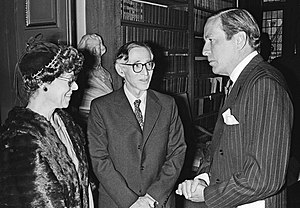 From right to left: Prince Claus of the Netherlands, Aaron Klug and his wife Liebe Bobrow, 1979

Klug was born in Želva, in Lithuania, to Jewish parents Lazar, a cattleman, and Bella (née Silin) Klug, with whom he emigrated to South Africa at the age of two. [14] [15] He was educated at Durban High School. [1] Paul de Kruif's 1926 book, Microbe Hunters, aroused his interest in microbiology. [16]

He started to study microbiology, but then moved into physics and maths, graduating with a Bachelor of Science degree at the University of the Witwatersrand, in Johannesburg. He studied physics and obtained his Master of Science degree at the University of Cape Town. [1] He was awarded an 1851 Research Fellowship from the Royal Commission for the Exhibition of 1851, [17] which enabled him to move to England, completing his PhD in research physics at Trinity College, Cambridge in 1953. [18]

Following his PhD, Klug moved to Birkbeck College in the University of London in late 1953, and started working with virologist Rosalind Franklin in the lab of crystallographer John Bernal. This experience aroused a lifelong interest in the study of viruses, and during his time there he made discoveries in the structure [19] of the tobacco mosaic virus. In 1962 he moved to the newly built Medical Research Council (MRC) Laboratory of Molecular Biology (LMB) in Cambridge. Over the following decade Klug used methods from X-ray diffraction, microscopy and structural modelling to develop crystallographic electron microscopy in which a sequence of two-dimensional images of crystals taken from different angles are combined to produce three-dimensional images of the target. He studied the structure of transfer RNA, and found what is known as zinc fingers as well as the neurofibrils in Alzheimer's disease. [16]

Also in 1962 Klug had been offered a teaching Fellowship at Peterhouse, Cambridge. After receiving the Nobel Prize in Chemistry in 1982, he went on teaching because he found the courses interesting and was later made an Honorary Fellow at the College. [1] [20]

Between 1986 and 1996 he was director of the Laboratory of Molecular Biology in Cambridge. Klug served[ when?] on the Advisory Council for the Campaign for Science and Engineering. [21] He also served[ when?] on the Board of Scientific Governors at The Scripps Research Institute. [22] He and Dai Rees approached the Wellcome Trust to found the Wellcome Sanger Institute, which was a key player in the Human Genome Project. [16]

Mathematical physicist and crystallographer distinguished for his contributions to molecular biology, especially the structure of viruses. Development of a theory of simultaneous temperature and phase changes in steels led him to apply related mathematical methods to the problem of diffusion and chemical reactions of gases in thin layers of haemoglobin solutions and in red blood cells. Then the late Rosalind Franklin introduced him to the x-ray study of tobacco mosaic virus to which he contributed by his application and further development of Cochran and Crick's theory of diffraction from helical chain molecules. Klug's most important work is concerned with the structure of spherical viruses. Together with D. Caspar he developed a general theory of spherical shells built up of a regular array of asymmetric particles. Klug and his collaborators verified the theory by x-ray and electron microscope studies, thereby revealing new and hitherto unsuspected features of virus structure. [25]

In 2000, Klug received the Golden Plate Award of the American Academy of Achievement. [28] In 2005, he was awarded South Africa's Order of Mapungubwe (gold) for exceptional achievements in medical science. [29] He was elected a Fellow of the Academy of Medical Sciences (FMedSci), also in 2005. [30]

In 2013, Israel's Ben-Gurion University of the Negev dedicated their centre for structural biology in Klug's name, Aaron Klug Integrated Centre for Biomolecular Structure. He, his family and the then-British Ambassador to Israel Matthew Gould, were in attendance. Klug was associated with the university and the town of Be'er Sheva, having visited them numerous times. [31] [32] [33]

Klug married Liebe Bobrow in 1948. [1] Though Klug had faced discrimination in South Africa, he remained religious and according to Sydney Brenner, he became more religious in his older age. [34]