From Wikipedia
https://en.wikipedia.org/wiki/3rd_century_BC
"200s BC" redirects here. For the decade, see 200s BC (decade).
Century

Hannibal crosses the Alps during the Second Punic War

The 3rd century BC started the first day of 300 BC and ended the last day of 201 BC. It is considered part of the Classical era, epoch, or historical period.

In the Mediterranean Basin, the first few decades of this century were characterized by a balance of power between the Greek Hellenistic kingdoms in the east, and the great mercantile power of Carthage in the west. This balance was shattered when conflict arose between ancient Carthage and the Roman Republic. In the following decades, the Carthaginian Republic was first humbled and then destroyed by the Romans in the First and Second Punic Wars. Following the Second Punic War, Rome became the most important power in the western Mediterranean.

In the eastern Mediterranean, the Seleucid Empire and Ptolemaic Kingdom, successor states to the empire of Alexander the Great, fought a series of Syrian Wars for control over the Levant. In mainland Greece, the short-lived Antipatrid dynasty of Macedon was overthrown and replaced by the Antigonid dynasty in 294 BC, a royal house that would dominate the affairs of Hellenistic Greece for roughly a century until the stalemate of the First Macedonian War against Rome. Macedon would also lose the Cretan War against the Greek city-state of Rhodes and its allies.

In India, Ashoka ruled the Maurya Empire. The Pandya, Chola and Chera dynasties of the classical age flourished in the ancient Tamil country.

The Warring States period in China drew to a close, with Qin Shi Huang conquering the six other nation-states and establishing the short-lived Qin dynasty, the first empire of China, which was followed in the same century by the long-lasting Han dynasty. However, a brief interregnum and civil war existed between the Qin and Han periods known as the Chu-Han contention, lasting until 202 BC with the ultimate victory of Liu Bang over Xiang Yu.

The Protohistoric Period began in Korea. In the following century the Chinese Han dynasty would conquer the Gojoseon kingdom of northern Korea. The Xiongnu were at the height of their power in Mongolia. They defeated the Han Chinese at the Battle of Baideng in 200 BC, marking the beginning of the forced Heqin tributary agreement and marriage alliance that would last several decades.

The world in the 3rd century BC 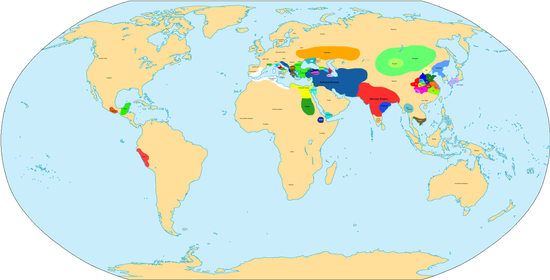 Map of the world in 300 BC, the beginning of the third century BC.

Map of the Hellenistic world and Maurya Empire in 281 BC. 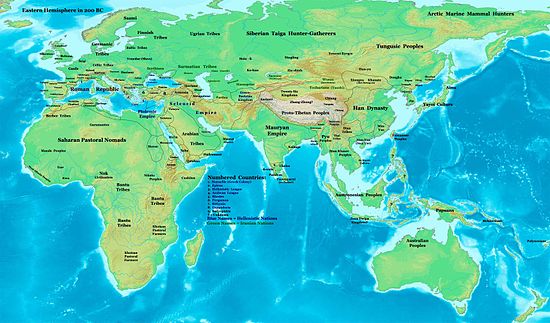 Map of the world in 200 BC, the end of the third century BC.

The Lion Capital of Ashoka of Sarnath, Uttar Pradesh, India, now the National Emblem of India, 3rd century BC, dated to the reign of Ashoka the Great during the Maurya Empire 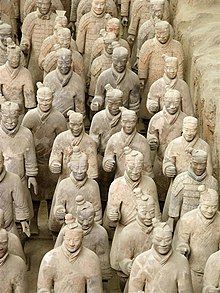 See: List of sovereign states in the 3rd century BC.