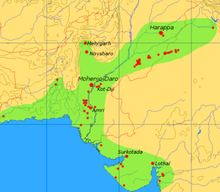 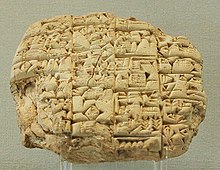 Letter in Sumerian cuneiform, c. 2400 BC, found in Girsu

In modern Korean national mythology, the character Dangun, whose mother was originally a bear, founded the state Gojoseon in 2333 BC and ruled it for about 2000 years. Some Koreans think of it as the earliest Korean state and of Dangun as the ancestor of Koreans. From 1948 until December 1961, the Republic of Korea officially [2] reckoned years by adding 2333 to the Common Era year. The year 2333 BC and the related myth are sometimes presented matter-of-factly as history rather than mythology in Korea. [3]

Genesis flood narrative. In Jewish and Christian mythology, sometime near the middle of the 24th century BC, [4] the (known) world was flooded, covering the tops of mountains, and destroying the human and land animal populations. Only the family of a man named Noah, and one breeding pair of each animal type survived the flood by floating in/on a large wooden boat for several months. [5]