From Wikipedia
(Redirected from Église de la Sainte-Trinité, Paris)
https://en.wikipedia.org/wiki/Église_de_la_Sainte-Trinité,_Paris
Church in Paris
Not to be confused with Holy Trinity Cathedral and the Russian Orthodox Spiritual and Cultural Center. 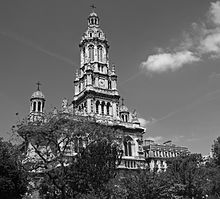 Upper portion as viewed from the south.

The Église de la Sainte-Trinité is a Roman Catholic church located in the 9th arrondissement of Paris. The church is a building of the Second Empire period, built between 1861 and 1867 at a cost of almost 5 million francs.

La Trinité, as it is known, was designed by Théodore Ballu as part of the beautification and reorganization of Paris under Baron Haussmann. Exterior figures of Faith, Hope, and Charity on the church were sculpted by Eugène-Louis Lequesne. The 93 meter-long church has a bell tower 63 metres high topped by a dome. The choir is ten steps higher than the nave and surrounded by an ambulatory. [1] Also named after it are the rue de La Trinité and the square de La Trinité.

The church is accessible by the Métro (the nearby station, Trinité, is named after it) and is known internationally for its former organist, the French composer Olivier Messiaen. It was the location of Gioachino Rossini's funeral, on 13 November 1868, Hector Berlioz's funeral, on 11 March 1869, and Georges Bizet's funeral in 1875.

The church's facade served as the inspiration for the design of the Saint-Jean-Baptiste Church in Quebec City [2] and the Cathedral of the Blessed Sacrament in Sacramento, California.

La Trinité features two organs, a Cavaillé-Coll chancel organ and a Cavaillé-Coll grand organ located in the balcony. The latter instrument has been extensively renovated and expanded over the decades:

The current specifications of the grand organ are:

The titular organists at La Trinité include