From Wikipedia
https://en.wikipedia.org/wiki/Yellow-crested_cockatoo
Species of bird

The yellow-crested cockatoo (Cacatua sulphurea) also known as the lesser sulphur-crested cockatoo, is a medium-sized (about 34-cm-long) cockatoo with white plumage, bluish-white bare orbital skin, grey feet, a black bill, and a retractile yellow or orange crest. The sexes are similar. 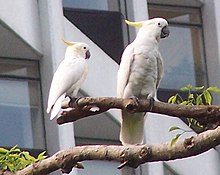 Traditionally, four subspecies have been recognized:

Based on recent evidence, three additional subspecies should be recognized (bringing the total to seven): [6]

The yellow-crested cockatoo nests in tree cavities. The eggs are white and usually two in a clutch. The incubation is shared by both parents. The eggs are incubated for about 28 days and the chicks leave the nest about 75 days after hatching. [5]

A legally owned family pet from the United Kingdom

The yellow-crested cockatoo is critically endangered. [1] Numbers have declined dramatically due to illegal trapping for the cage-bird trade. Between 1980 and 1992, over 100,000 of these birds were legally exported from Indonesia, yet a German proposal submitted to CITES to move it to Appendix I [7] was not approved. It has since been moved to Appendix I. [2] The current population is estimated at fewer than 2,500 individuals and is thought to be declining in number. [2]

The subspecies C. s. abbotti is found only on the island of Masakambing. Its population on this tiny island (about 5 km2 or 1.9 mi2) had fallen to 10 as of June and July 2008. The decline results from trapping and logging, especially of mangrove ( Avicennia apiculata) and kapok trees. [8]

An introduced population of these birds is found in Hong Kong. [9] They are a common sight across the densely populated area on both sides of the harbour, easily spotted in the woods and public parks in the north and west of Hong Kong Island. The large group has apparently developed from a number of caged birds that have been released into the Hong Kong area over many years. [10] An often repeated story is that Hong Kong Governor Sir Mark Aitchison Young released the Government House's entire bird collection – including a large number of yellow-crested cockatoos – hours before surrendering Hong Kong to Japanese troops in December 1941. [11]