From Wikipedia
https://en.wikipedia.org/wiki/Worshipful_Company_of_Haberdashers
Livery company of the City of London 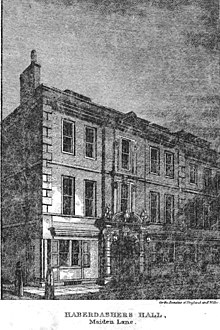 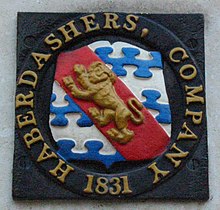 An 1831 heraldic property mark of the Haberdashers' Company

The Worshipful Company of Haberdashers, one of the Great Twelve City Livery Companies, is an ancient merchant guild of London, England associated with the silk and velvet trades.

The Haberdashers' Company follows the Mercers' Company ( inc. 1394, also connected with clothing and previously haberdashery) in precedence, receiving its first Royal Charter in 1448 and holds records dating back to 1371. The formal name under which it is incorporated is The Master and Four Wardens of the Fraternity of the Art or Mystery of Haberdashers in the City of London.

The company was originally responsible for the regulation of silk and velvet merchants, but began losing control over those trades as the population of London increased and spread outwards from the City after the Industrial Revolution. Through careful stewardship of financial bequests and funds, the company now serves as a significant educational and charitable institution whilst maintaining links with its heritage by giving awards for fashion education.

As an educational foundation, the Haberdashers' Company maintains a strong tradition of supporting schools. It founded a boys' school in Hoxton in 1690, and following redevelopment of the site, in June 1875, it reopened the school, which was now divided into two, educating boys and girls. At the same time, it opened a boys and girls school in Hatcham, South London. The Hoxton Boys' School moved to Hampstead, North London, and subsequently to Elstree in 1961 to become the Haberdashers' Aske's Boys' School, Elstree. The Girls' School, founded in Hoxton moved to Creffield Road, Acton, opening on 1 November 1889 with 47 Hoxton pupils and 12 new girls, working in a temporary iron building. In September 1974, it opened on its present site in Elstree as Haberdashers' Aske's School for Girls, adjacent to the Boys' School.

The original Hatcham schools is now run by the Haberdashers' Company, as Hatcham Academy, open to girls and boys; other schools are situated elsewhere in the United Kingdom: e.g. William Adams, a haberdasher by trade, founded in 1656 the Adams' Grammar School in his home town of Newport, Shropshire. In 1990, at Monmouth School, the Glover Music School was established funded by Dame Jane Glover, sister of a Past Master, and daughter of a previous headmaster of the school.

In keeping with its Christian tradition, the Haberdashers' Company continues to present copies of the King James Bible to pupils at all its schools. The company owns and takes an interest in the patronage of its eight parish church advowsons.

The company ranks eighth in the order of precedence of City livery companies and, as such, it is recognised as one of the Great Twelve City Livery Companies. Like other livery companies, it supports the work of the Lord Mayor, the City of London Corporation and the Sheriffs of London: Alderman William Russell is the first Lord Mayor of London to serve consecutive terms (2019–21) since the 19th century. [3] The Earl of Wessex currently serves on the Haberdashers' Court of Assistants.

Haberdashers' Hall was situated near the Guildhall in Bassishaw Ward for many centuries, but from 2002 the company took additional premises in the City Ward of Farringdon Without, where it is now based.

The Haberdashers' motto is "Serve and Obey". 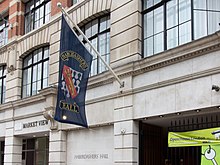 The Haberdashers' Company moved to its new hall at 18 West Smithfield on 15 April 2002, located opposite the King Henry Gate of St. Bartholomew's Hospital.

On 24 October 2002 Queen Elizabeth II was welcomed by the Master Haberdasher, Nicholas Lund, to formally declare its Hall open.

Haberdashers' Hall, with its various meeting and function rooms as well as offices, is centred on a cloistered courtyard, entered through the façade at Market View, Smithfield, and also includes residential apartments and retail units. On the south side of the property, the company has developed office space which opens onto Hosier Lane.

Within the Hall, its cloisters to the right-hand side lead via a circular staircase to the first floor where its Court Room, Committee Room and a luncheon room lead off a reception gallery. The reception gallery leads to the banquet hall, which has a high vaulted ceiling and is entirely oak-panelled. There are also offices for company staff, facilities for catering staff with storage and cellars below the hall, together with accommodation for the Master and the Beadle. The Clerk to the Haberdashers' Company is Brigadier Angus Watson, and the Revd Canon David Parrott serves as Honorary Chaplain. [4]