During the second half of 2009 the Tropenmuseum of Amsterdam has undertaken a pioneering partnership with WMF Netherlands. The Tropenmuseum is an anthropological museum with a focus on former Dutch colonies. The museum staff collaborated with Wikimedian volunteers to hold a physical space exhibit about the cultural history of Suriname. President Ronald Venetiaan of Suriname attended the exhibit. More recently the Tropenmuseum donated 35,000 images about Indonesia to Wikimedia Commons.

Late last month Gerard Meijssen of Open Progress asked me to look at one of the Tropenmuseum's first Indonesian uploads. Open Progress is a nonprofit that improves access to online information for people from developing countries. There wasn't much to see in that first file: 700 × 544 pixels, 92 KB. The sort of restoration work I do usually starts with a TIFF format file of at least 10MB. A very tight crop and damaged edges made it less than ideal to work with. Yet it was a rare type of image: a megalith that was being transported by human beings without motor vehicles or draft animals.

A few days later Gerard provided a 25 MB TIFF version and said that the museum staff had gotten a professional photographer to redigitize at high resolution, and I gave it my best shot. It's rare for a museum to share its resources this openly; our hope is to make the collaboration successful so that other institutions will follow the Tropenmuseum's example. So this is a digital survey of that restoration project, which took about 18 hours to complete.

This photograph was taken circa 1915 on the island of Nias. Reportedly, 525 people spent three days transporting the stone and erecting it in the village of Bawemataloeo to honor the passing of an important man.

The right margin crop stopped at the shoulder of this man.

There was very little room to crop left and right, and no room at all to crop top or bottom. So only a small part of the most severe damage could be removed that way; the rest would have to be restored or reconstructed. A face at left and a shoulder at right made the most viable compromise points for these crops.

After cropping, this restoration went through several manual passes to remove dirt and scratches. I worked at 200% resolution and began with the smallest and simplest marks. Later passes recreated faces, musculature, and other complex structures. This work used the Photoshop healing tool at 100% hardness and clone stamp at 35% hardness. A free software program called GIMP has similar capabilities.

Several parts of the print had been damaged by a not very successful attempt at physical retouching.

Before the days of digital editing someone had attempted a physical restoration on this print. Fading lines were inked in with black at the lower right quadrant of the photograph. At any sort of high resolution the effect is crude. In the example above it turns up as dark vertical lines that look like pen marks. This sort of alteration was performed some time during the early to mid-twentieth century.

Digital restoration on these features involved replacing the black marks with credible shapes and textures. The earlier attempt at physical restoration was occasionally useful for indicating features and contours, but generally created more difficulties than it solved.

One of the most heavily damaged portions was the lower left corner. At left a man's hand remains visible. Context and comparison against other parts of the image suggest that the obstructed features include a log, a loincloth, and a thigh. I retained as much actual detail as possible and patched the rest.

The edges of this image were heavily faded. A large number of incremental adjustments were necessary to correct for uneven fading. In this closeup the man's hand changes brightness abruptly at his wrist and continues lightening until his fingertip appears nearly white. Good digital editing software can mask out parts of an image and apply changes locally. Successive masks darkened the hand and fingertips until they were compatible with the undamaged forearm. Finally a mask adjustment reduced contrast on the hand because its shaded areas had become nearly black. Both the contours and the shadows needed to harmonize in context.

Overall, about half the time of this restoration was spent on mask adjustments.

Texture on the megalith surface, at right, could be restored with minimal change to other parts of the image.

The final edit was a relatively easy one. In order to recover texture on the overexposed surface I used the Photoshop shadow/highlight tool. The adjustment enhanced contrast in highlights while making minimal changes to midtones and dark areas. 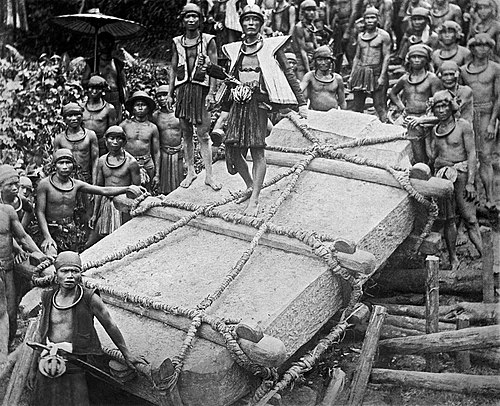 My aim was to use digital editing software like a time machine. As far as possible, I wanted to eliminate old, dead, unimportant from the viewer's first reaction so that attention is drawn to the subject. Diverse cultures from Ireland to Easter Island have constructed megaliths. Nias is one of the few places that retained a megalithic culture into the twentieth century.

The edits performed in process are documented in detail at the image hosting page along with cross links between restored and unrestored versions. Also an uncompressed partial restoration is available in TIFF format so that, in the spirit of wiki collaboration, anyone who wants to improve on the work has access to a version where the histogram has not been altered. Anyone who prefers the unaltered file has easy access to view it.

The longer-term plan is to scale up this endeavor by partnering with art schools. Instructors like to offer assignments that have real world significance. By developing more collaborative projects between WMF chapters, the Tropenmuseum, and other institutions the best student work could be exhibited in major museums. High quality digital restoration provides a motivating factor for cultural institutions to partner with WMF, which can yield large volume media donations of tens or hundreds of thousands of images.

And if we had 100 people each doing two restorations a week, Wikipedia could gain 10,000 featured pictures in one year.

In this issue
7 December 2009
+ Add a commentDiscuss this story
These comments are automatically transcluded from this article's talk page. To follow comments, add the page to your watchlist. If your comment has not appeared here, you can try purging the cache.

In the editorial, "this fall"? Tut tut tut. You should remember that in the UK it is autumn, and in Australasia it is spring. Tut, tut, tut.

I've seen this a few times lately on several pages, and can only guess it's because of the time of year – it's not a slip I often see as I gnome around. Stil, tut, tut, tut.

(There's another typo somewhere but I'm not that picky.)

This type of thing happens quite a lot. Many US textbooks on the Vietnam War talk about the Tet Offensive being in Winter when it is 90 F and so forth YellowMonkey ( bananabucket) ( Invincibles finally at Featured topic candidates) 22:04, 9 December 2009 (UTC)

I am always amazed at the skill and patience of those who do restorations like this -- I can do simple stuff, but this is outstanding! –  ukexpat ( talk) 14:29, 9 December 2009 (UTC) As ever, I am in stunned amazement at what experts can do to preserve art for future generations. And these are volunteers! Thank you for the hard work that went into this. -- -- Александр Дмитрий (Alexandr Dmitri) ( talk) 19:12, 10 December 2009 (UTC)

I concur. I added my little pickiness probably because I had my gnoming head on, but really enjozed reading about it, and the whole project. I do hope my little pickiness did not distract from that but emphasised it, since usually when I am taking the *, I am taking it out of myself more than anyone else. A fantastic contribution, and a great editorial. Si Trew ( talk) 20:17, 10 December 2009 (UTC)

"Before the days of digital editing someone had attempted a physical restoration on this print. Fading lines were inked in with black at the lower right quadrant of the photograph. " This procedure is very unlikely to have been done for restoration purposes. Inked-in black lines were usually done to increase the visible contrast between adjoining low-contrast parts of a photograph prior to it being used as an book or magazine illustration. So it has been done by a printer, not a would-be restorer. Meowy 17:03, 11 December 2009 (UTC)

Hey, while getting so many FPs per year would be great, don't forget that not everyone has the pure skills needed for such a task. Remember Durova, you're a standout :) Res Mar 02:32, 13 December 2009 (UTC)