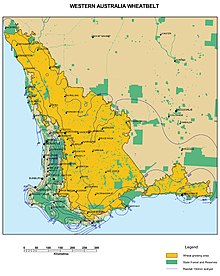 Location of the Wheatbelt within Western Australia 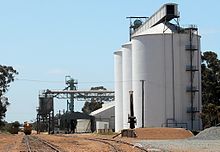 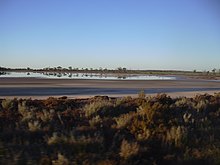 The Wheatbelt is one of nine regions of Western Australia defined as administrative areas for the state's regional development, and a vernacular term for the area converted to agriculture during colonisation. [a] It partially surrounds the Perth metropolitan area, extending north from Perth to the Mid West region, and east to the Goldfields-Esperance region. It is bordered to the south by the South West and Great Southern regions, and to the west by the Indian Ocean, the Perth metropolitan area, and the Peel region. Altogether, it has an area of 154,862 square kilometres (59,793 sq mi) (including islands).

The region has 42 local government authorities, with an estimated population of 75,000 residents. The Wheatbelt accounts for approximately three per cent of Western Australia's population. [3]

The area, once a diverse ecosystem, reduced when clearing began in the 1890s with the removal of plant species such as eucalypt woodlands and mallee, is now home to around 11% of Australia's critically endangered plants. [4]

A number of nationally threatened birds reside in the Wheatbelt, including the endangered Carnaby's black cockatoo and the vulnerable malleefowl. [5]

The Wheatbelt encompasses a range of ecosystems and, as a result, there are a range of industries operating in the region.[ clarification needed]

In the Interim Biogeographic Regionalisation for Australia there are a number of subdivisions such as the Avon Wheatbelt (AVW), and a further breakdown of Avon Wheatbelt P1 (AW1) and Avon Wheatbelt P2 (AW2), Jarrah Forest, Geraldton Sandplains and Mallee regions.

Near the coast, the region receives relatively high rainfall and mild temperatures, and its 150 kilometres (93 mi) of coastline is a significant tourist area. In contrast, the eastern fringe is very arid, and is mainly used for pastoral farming of sheep. Mining of gold, nickel and iron ore also occurs. The remainder of the region is highly suited to agriculture, and is the source of nearly two thirds of the state's wheat production, half of its wool production, and the majority of its lamb and mutton, oranges, honey, cut flowers and a range of other agricultural and pastoral products.

With a range of climate and economic changes in the region, considerable effort is made by government at all levels to cope with the decline of some communities, and create opportunities for ventures that keep population in the region. [6]

The Wheatbelt once had an extensive railway system, which transported bulk wheat grain. It has been reduced in part, while the main lines are being supported.

The following list is the shires listed in the Wheatbelt as designated by the Wheatbelt Development Commission. [10] Some shires in adjoining regions are traditionally considered part of the Wheatbelt – there are shires in the Great Southern, Goldfields-Esperance and Mid West regions that are dominantly grain growing areas.

Sub-regions within the Wheatbelt

There are numerous subdivisions of the Wheatbelt, and in most cases the separation is by local government areas.

The Wheatbelt Development Commission [11] (WDC) breaks the region up into five sub-regions with four offices:

In some schemes, such as one of the Western Australian tourism regions, all of the Wheatbelt is included in the larger Australia's Golden Outback. [12] [13] [14]

However the shires within the Wheatbelt are also in tourist terms further divided into internal regions:

The Wheatbelt is separated into other designations at various times as well: