From Wikipedia
(Redirected from Weather satellites)
https://en.wikipedia.org/wiki/Weather_satellites
Type of satellite designed to record the state of the Earth's atmosphere

GOES-16, a United States weather satellite of the meteorological-satellite service

A weather satellite is a type of satellite that is primarily used to monitor the weather and climate of the Earth. Satellites can be polar orbiting (covering the entire Earth asynchronously), or geostationary (hovering over the same spot on the equator). [1]

While primarily used to detect the development and movement of storm systems and other cloud patterns, meteorological satellites can also detect other phenomena such as city lights, fires, effects of pollution, auroras, sand and dust storms, snow cover, ice mapping, boundaries of ocean currents, and energy flows. Other types of environmental information are collected using weather satellites. Weather satellite images helped in monitoring the volcanic ash cloud from Mount St. Helens and activity from other volcanoes such as Mount Etna. [2] Smoke from fires in the western United States such as Colorado and Utah have also been monitored.

A mosaic of photographs of the United States from the ESSA-9 weather satellite, taken on June 26, 1969

As early as 1946, the idea of cameras in orbit to observe the weather was being developed. This was due to sparse data observation coverage and the expense of using cloud cameras on rockets. By 1958, the early prototypes for TIROS and Vanguard (developed by the Army Signal Corps) were created. [3] The first weather satellite, Vanguard 2, was launched on February 17, 1959. [4] It was designed to measure cloud cover and resistance, but a poor axis of rotation and its elliptical orbit kept it from collecting a notable amount of useful data. The Explorer VI and VII satellites also contained weather-related experiments. [3]

The first weather satellite to be considered a success was TIROS-1, launched by NASA on April 1, 1960. [5] TIROS operated for 78 days and proved to be much more successful than Vanguard 2. TIROS paved the way for the Nimbus program, whose technology and findings are the heritage of most of the Earth-observing satellites NASA and NOAA have launched since then. Beginning with the Nimbus 3 satellite in 1969, temperature information through the tropospheric column began to be retrieved by satellites from the eastern Atlantic and most of the Pacific Ocean, which led to significant improvements to weather forecasts. [6]

The ESSA and NOAA polar orbiting satellites followed suit from the late 1960s onward. Geostationary satellites followed, beginning with the ATS and SMS series in the late 1960s and early 1970s, then continuing with the GOES series from the 1970s onward. Polar orbiting satellites such as QuikScat and TRMM began to relay wind information near the ocean's surface starting in the late 1970s, with microwave imagery which resembled radar displays, which significantly improved the diagnoses of tropical cyclone strength, intensification, and location during the 2000s and 2010s.

The DSCOVR satellite, owned by NOAA, was launched in 2015 and became the first deep space satellite that can observe and predict space weather. It can detect potentially dangerous weather such as solar wind and geomagnetic storms. This is what has given humanity the capability to make accurate and preemptive space weather forecasts since the late 2010’s. [7]

Observation is typically made via different 'channels' of the electromagnetic spectrum, in particular, the visible and infrared portions.

Visible-light images from weather satellites during local daylight hours are easy to interpret even by the average person; clouds, cloud systems such as fronts and tropical storms, lakes, forests, mountains, snow ice, fires, and pollution such as smoke, smog, dust and haze are readily apparent. Even wind can be determined by cloud patterns, alignments and movement from successive photos. [10]

The thermal or infrared images recorded by sensors called scanning radiometers enable a trained analyst to determine cloud heights and types, to calculate land and surface water temperatures, and to locate ocean surface features. Infrared satellite imagery can be used effectively for tropical cyclones with a visible eye pattern, using the Dvorak technique, where the difference between the temperature of the warm eye and the surrounding cold cloud tops can be used to determine its intensity (colder cloud tops generally indicate a more intense storm). [11] Infrared pictures depict ocean eddies or vortices and map currents such as the Gulf Stream which are valuable to the shipping industry. Fishermen and farmers are interested in knowing land and water temperatures to protect their crops against frost or increase their catch from the sea. Even El Niño phenomena can be spotted. Using color-digitized techniques, the gray shaded thermal images can be converted to color for easier identification of desired information. 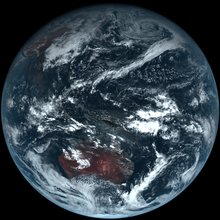 Each meteorological satellite is designed to use one of two different classes of orbit: geostationary and polar orbiting.

Geostationary weather satellites orbit the Earth above the equator at altitudes of 35,880 km (22,300 miles). Because of this orbit, they remain stationary with respect to the rotating Earth and thus can record or transmit images of the entire hemisphere below continuously with their visible-light and infrared sensors. The news media use the geostationary photos in their daily weather presentation as single images or made into movie loops. These are also available on the city forecast pages of www.noaa.gov (example Dallas, TX). [12]

Several geostationary meteorological spacecraft are in operation. The United States' GOES series has three in operation: GOES-15, GOES-16 and GOES-17. GOES-16 and-17 remain stationary over the Atlantic and Pacific Oceans, respectively. [13] GOES-15 was retired in early July 2019. [14]

The satellite GOES 13 that was previously owned by the National Oceanic and Atmospheric Association (NOAA) was transferred to the U.S. Space Force in 2019 and renamed the EWS-G1; becoming the first geostationary weather satellite to be owned and operated by the U.S. Department of Defense. [15]

Russia's new-generation weather satellite Elektro-L No.1 operates at 76°E over the Indian Ocean. The Japanese have the MTSAT-2 located over the mid Pacific at 145°E and the Himawari 8 at 140°E. The Europeans have four in operation, Meteosat-8 (3.5°W) and Meteosat-9 (0°) over the Atlantic Ocean and have Meteosat-6 (63°E) and Meteosat-7 (57.5°E) over the Indian Ocean. China currently has four Fengyun (风云) geostationary satellites (FY-2E at 86.5°E, FY-2F at 123.5°E, FY-2G at 105°E and FY-4A at 104.5 °E) operated. [16] India also operates geostationary satellites called INSAT which carry instruments for meteorological purposes.

The United States Department of Defense's Meteorological Satellite ( DMSP) can "see" the best of all weather vehicles with its ability to detect objects almost as 'small' as a huge oil tanker. In addition, of all the weather satellites in orbit, only DMSP can "see" at night in the visual. Some of the most spectacular photos have been recorded by the night visual sensor; city lights, volcanoes, fires, lightning, meteors, oil field burn-offs, as well as the Aurora Borealis and Aurora Australis have been captured by this 450-mile-high space vehicle's low moonlight sensor.

At the same time, energy use and city growth can be monitored since both major and even minor cities, as well as highway lights, are conspicuous. This informs astronomers of light pollution. The New York City Blackout of 1977 was captured by one of the night orbiter DMSP space vehicles.

In addition to monitoring city lights, these photos are a life saving asset in the detection and monitoring of fires. Not only do the satellites see the fires visually day and night, but the thermal and infrared scanners on board these weather satellites detect potential fire sources below the surface of the Earth where smoldering occurs. Once the fire is detected, the same weather satellites provide vital information about wind that could fan or spread the fires. These same cloud photos from space tell the firefighter when it will rain.

Some of the most dramatic photos showed the 600 Kuwaiti oil fires that the fleeing Army of Iraq started on February 23, 1991. The night photos showed huge flashes, far outstripping the glow of large populated areas. The fires consumed millions of gallons of oil; the last was doused on November 6, 1991.

Snowfield monitoring, especially in the Sierra Nevada, can be helpful to the hydrologist keeping track of available snowpack for runoff vital to the watersheds of the western United States. This information is gleaned from existing satellites of all agencies of the U.S. government (in addition to local, on-the-ground measurements). Ice floes, packs, and bergs can also be located and tracked from weather spacecraft.

Even pollution whether it is nature-made or man-made can be pinpointed. The visual and infrared photos show effects of pollution from their respective areas over the entire earth. Aircraft and rocket pollution, as well as condensation trails, can also be spotted. The ocean current and low level wind information gleaned from the space photos can help predict oceanic oil spill coverage and movement. Almost every summer, sand and dust from the Sahara Desert in Africa drifts across the equatorial regions of the Atlantic Ocean. GOES-EAST photos enable meteorologists to observe, track and forecast this sand cloud. In addition to reducing visibilities and causing respiratory problems, sand clouds suppress hurricane formation by modifying the solar radiation balance of the tropics. Other dust storms in Asia and mainland China are common and easy to spot and monitor, with recent examples of dust moving across the Pacific Ocean and reaching North America.

In remote areas of the world with few local observers, fires could rage out of control for days or even weeks and consume millions of acres before authorities are alerted. Weather satellites can be a tremendous asset in such situations. Nighttime photos also show the burn-off in gas and oil fields. Atmospheric temperature and moisture profiles have been taken by weather satellites since 1969. [17]

Not all weather satellites are direct imagers. Some satellites are sounders that take measurements of a single pixel at a time. They have no horizontal spatial resolution but often are capable or resolving vertical atmospheric layers. Soundings along the satellite ground track can still be gridded later to form maps.