From Wikipedia
https://en.wikipedia.org/wiki/Watercraft
Vehicles that are intended for locomotion on or in the water 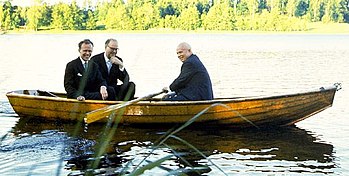 From right to left, First Secretary of the Soviet Union Nikita Khrushchev, Swedish Prime Minister Tage Erlander and an interpreter in 1964 at Harpsund on a rowboat (or rowing boat), which is an example of a watercraft.

Watercraft, also known as water vessels or waterborne vessels, are vehicles used in and on water, including boats, ships, hovercraft, and submarines. Watercraft usually have a propulsive capability (whether by sail, oar, paddle, or engine) and hence are distinct from a simple device that merely floats, such as a log raft.

Most watercraft would be described as either a ship or a boat. However, there are numerous craft which many people would consider neither a ship nor a boat, such as: surfboards (when used as a paddle board), underwater robots, seaplanes, and torpedoes.

Although ships are typically larger than boats, the distinction between those two categories is not one of size per se.

The term "watercraft" (unlike such terms as aircraft or spacecraft) is rarely used to describe any individual object: rather the term serves to unify the category that ranges from jet skis to aircraft carriers. Such a vessel may be used in saltwater and freshwater; for pleasure, recreation, physical exercise, commerce, transport or military missions. 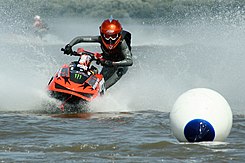 Racing scene of a personal watercraft

Usually the purposes behind watercraft designs and skills are for seafaring education or leisure activities, fishing and resource extraction, transportation of cargo or passengers, and for conducting combat or salvage operations. In general, the purpose of a water vehicle identifies its utility with a maritime industry sub-sector.

The design from which a water vehicle is created usually seeks to achieve a balance between internal capacity ( tonnage), speed and seaworthiness. Tonnage is predominantly a consideration in transport operations, speed is important for warships, and safety is a primary consideration for less experienced or often smaller and less stable training and leisure vehicles. This is due to the great level of regulatory compliance required by the larger watercraft, which ensures very infrequent instances of foundering at sea through application of extensive computer modeling and ship model basin testing before shipyard construction begins.

Historically, water vehicles have been propelled by people with poles, paddles, or oars, through manipulation of sails that propel by wind pressure and/or lift, and a variety of engineered machinery that create subsurface thrust through the process of internal combustion or electricity. The technological history of watercraft in European history can be divided by reference to marine propulsion as simple paddle craft, oared galleys from the 8th century BCE until the 15th century, lateen sail during the Age of Discovery from the early 15th century and into the early 17th century, full-rigged ships of the Age of Sail from the 16th to the mid 19th century, [1] the Age of Steam reciprocating marine steam engine roughly between 1770 and 1914, the steam turbine, later gas turbine, and internal combustion engines using diesel fuel, petrol and LNG as fuels from the turn of the 20th century, which have been supplemented to a degree by nuclear marine propulsion since the 1950s in some naval watercraft. Current technological development seeks to identify cheaper, renewable and less polluting sources of propulsion for watercraft of all shapes and sizes. 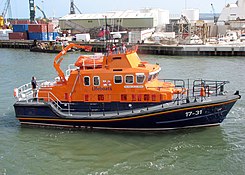 A Severn-class lifeboat in Poole Harbour, Dorset, England. This is the largest class of UK lifeboat, at 17 metres long
Main article: Shipbuilding

Secondary applications of technology in watercraft have been those of used structural materials, navigation aids; and in the case of warships, weapon systems. The purpose of usage and the physical environment define the materials used in construction which had historically included grasses, leather, timbers, metals combined with timber or without, silicate and plastic derivatives, and others.

Watercraft registration is the registration of a watercraft with a government authority. In the United States, it consists of an alphanumeric string called a vessel registration number that is issued by the state's Department of Motor Vehicles. [2]

Navigation aids have varied over time: from astronomical observation, to mechanical mechanisms, and more recently analogue and digital computer devices that now rely on GPS systems.

Naval weapon systems have closely followed the development in land weapons, developing from:

Until development of steam propulsion was coupled with rapid-firing breech-loading guns, naval combat was often concluded by a boarding combat between the opposing crews. Since the early 20th century, there has been a substantial development in technologies which allow force projection from a naval task force to a land objective using marine infantry.