From Wikipedia
https://en.wikipedia.org/wiki/Warship
Ship that is built and primarily intended for naval warfare
For other uses, see Warship (disambiguation). 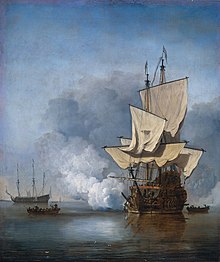 The Cannon Shot (1670) by Willem van de Velde the Younger, showing a late Dutch 17th-century ship of the line

A warship or combatant ship is a naval ship that is built and primarily intended for naval warfare. Usually they belong to the armed forces of a state. [1] As well as being armed, warships are designed to withstand damage and are usually faster and more maneuverable than merchant ships. Unlike a merchant ship, which carries cargo, a warship typically carries only weapons, ammunition and supplies for its crew. Warships usually belong to a navy, though they have also been operated by individuals, cooperatives and corporations.

History and evolution of warships 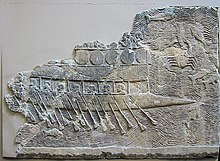 Assyrian warship, a bireme with pointed bow circa 700 BC

Trireme, a warship used by the Romans and Greeks in ancient times.
See also: Naval tactics in the age of galleys

In the time of Mesopotamia, Ancient Persia, Ancient Greece and the Roman Empire, warships were always galleys (such as biremes, triremes and quinqueremes): long, narrow vessels powered by banks of oarsmen and designed to ram and sink enemy vessels, or to engage them bow-first and follow up with boarding parties. The development of catapults in the 4th century BC and the subsequent refinement of this technology enabled the first fleets of artillery-equipped warships by the Hellenistic age. During late antiquity, ramming fell out of use and the galley tactics against other ships used during the Middle Ages until the late 16th century focused on boarding.

The Age of Sail 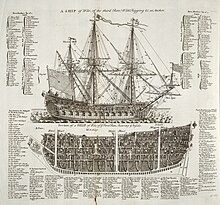 Naval artillery was redeveloped in the 14th century, but cannon did not become common at sea until the guns were capable of being reloaded quickly enough to be reused in the same battle. The size of a ship required to carry a large number of cannon made oar-based propulsion impossible, and warships came to rely primarily on sails. The sailing man-of-war emerged during the 16th century.

By the middle of the 17th century, warships were carrying increasing numbers of cannon on their broadsides and tactics evolved to bring each ship's firepower to bear in a line of battle. The man-of-war now evolved into the ship of the line. In the 18th century, the frigate and sloop-of-war – too small to stand in the line of battle – evolved to convoy trade, scout for enemy ships and blockade enemy coasts. [2]

See also: Naval tactics in the Age of Steam

During the 19th century a revolution took place in the means of marine propulsion, naval armament and construction of warships. Marine steam engines were introduced, at first as an auxiliary force, in the second quarter of the 19th century.

The French ironclad Gloire under sail

The Crimean War gave a great stimulus to the development of guns. The introduction of explosive shells soon led to the introduction of iron, and later steel, naval armour for the sides and decks of larger warships. The first ironclad warships, the French Gloire and British Warrior, made wooden vessels obsolete. Metal soon entirely replaced wood as the main material for warship construction.

From the 1850s, the sailing ships of the line were replaced by steam-powered battleships, while the sailing frigates were replaced by steam-powered cruisers. The armament of warships also changed with the invention of the rotating barbettes and turrets, which allowed the guns to be aimed independently of the direction of the ship and allowed a smaller number of larger guns to be carried. 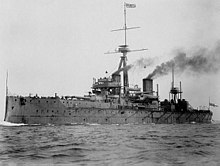 Another revolution in warship design began shortly after the start of the 20th century, when Britain launched the Royal Navy's all-big-gun battleship Dreadnought in 1906. Powered by steam turbines, it was bigger, faster and more heavily gunned than any existing battleships, which it immediately rendered obsolete. It was rapidly followed by similar ships in other countries. The Royal Navy also developed the first battlecruisers. Mounting the same heavy guns as the dreadnoughts on an even larger hull, battlecruisers sacrificed amour protection for speed. Battlecruisers were faster and more powerful than all existing cruisers, which they made obsolete, but battlecruisers proved to be much more vulnerable than contemporary battleships. The torpedo-boat destroyer was developed at the same time as the dreadnoughts. Bigger, faster and more heavily gunned than the torpedo boat, the destroyer evolved to protect the capital ships from the menace of the torpedo boat.

At this time, Britain also developed the use of fuel oil to produce steam to power warships, instead of coal. While reliance on coal required navies to adopt a "coal strategy" to remain viable, fuel oil produced twice the power and was significantly easier to handle. [3] [4] Tests were conducted by the Royal Navy in 1904 involving the torpedo-boat destroyer Spiteful, the first warship powered solely by fuel oil. [5] [6] These proved its superiority, and all warships procured for the Royal Navy from 1912 were designed to burn fuel oil. [7] [8]

See also: List of ships of the Second World War

During the lead-up to the Second World War, Germany and Great Britain once again emerged as the two dominant Atlantic sea powers. Germany, under the Treaty of Versailles, had its navy limited to only a few minor surface ships. But the clever use of deceptive terminology, such as " Panzerschiffe" deceived the British and French commands. They were surprised when ships such as Admiral Graf Spee, Scharnhorst, and Gneisenau raided the Allied supply lines. The greatest threat though, was the introduction of the Kriegsmarine's largest vessels, Bismarck and Tirpitz. Bismarck was heavily damaged and sunk/scuttled after a series of sea battles in the north Atlantic in 1941, while Tirpitz was destroyed by the Royal Air Force in 1944. The British Royal Navy gained dominance of the European theatre by 1943. 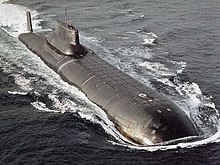 The Second World War brought massive changes in the design and role of several types of warships. For the first time, the aircraft carrier became the clear choice to serve as the main capital ship within a naval task force. World War II was the only war in history in which battles occurred between groups of carriers. World War II saw the first use of radar in combat. It brought the first naval battle in which the ships of both sides never engaged in direct combat, instead sending aircraft to make the attacks, as in the Battle of Coral Sea.

Modern warships are generally divided into seven main categories, which are: aircraft carriers, cruisers, [a] destroyers, frigates, corvettes, submarines and amphibious assault ships. Battleships comprise an eighth category, but are not in current service with any navy in the world. Only the deactivated American Iowa-class battleships still exist as potential combatants, and battleships in general are unlikely to re-emerge as a ship class without redefinition. The destroyer is generally regarded as the dominant surface-combat vessel of most modern blue-water navies. However, the once distinct roles and appearances of cruisers, destroyers, frigates, and corvettes have blurred. Most vessels have come to be armed with a mix of anti-surface, anti-submarine and anti-aircraft weapons. Class designations no longer reliably indicate a displacement hierarchy, and the size of all vessel types has grown beyond the definitions used earlier in the 20th century. Another key differentiation between older and modern vessels is that all modern warships are "soft", without the thick armor and bulging anti-torpedo protection of World War II and older designs.

Most navies also include many types of support and auxiliary vessels, such as minesweepers, patrol boats and offshore patrol vessels.

By 1982 the United Nations Convention on the Law of the Sea (UNCLOS) treaty negotiations had produced a legal definition of what was then generally accepted as a late-twentieth century warship. The UNCLOS definition was : "A warship means a ship belonging to the armed forces of a State bearing the external marks distinguishing such ships of its nationality, under the command of an officer duly commissioned by the government of the State and whose name appears in the appropriate service list or its equivalent, and manned by a crew which is under regular armed forces discipline." [1]

Development of the submarine

The first practical submarines were developed in the late 19th century, but it was only after the development of the torpedo that submarines became truly dangerous (and hence useful). By the end of the First World War submarines had proved their potential. During the Second World War Nazi Germany's submarine fleet of U-boats almost starved Britain into submission and inflicted huge losses on US coastal shipping. The success of submarines led to the development of new anti-submarine convoy escorts during the First and Second World Wars, such as the destroyer escort. Confusingly, many of these new types adopted the names of the smaller warships from the age of sail, such as corvette, sloop and frigate. 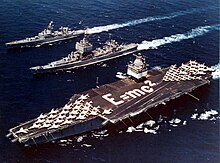 Development of the aircraft carrier

A major shift in naval warfare occurred with the introduction of the aircraft carrier. First at Taranto and then at Pearl Harbor, the aircraft carrier demonstrated its ability to strike decisively at enemy ships out of sight and range of surface vessels. By the end of the Second World War, the carrier had become the dominant warship. 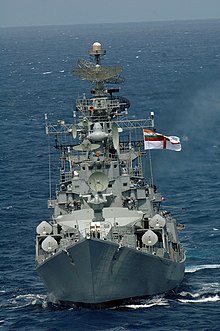 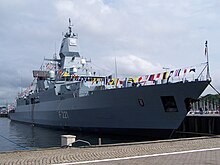