From Wikipedia
https://en.wikipedia.org/wiki/Wakayama_Prefecture
Prefecture of Japan
Prefecture in Kansai, Japan

Wakayama is the capital and largest city of Wakayama Prefecture, with other major cities including Tanabe, Hashimoto, and Kinokawa. [2]: 1025  Wakayama Prefecture is located on the western coast of the Kii Peninsula on the Kii Channel, connecting the Pacific Ocean and Seto Inland Sea, across from Tokushima Prefecture on the island of Shikoku.

Present-day Wakayama is mostly the western part of the province of Kii. [3]

On July 17–18, 1953, a torrential heavy rain occurred, followed by collapse of levees, river flooding and landslides in a wide area. Many bridges and houses were destroyed. According to an officially confirmed report by the Government of Japan, 1,015 people died, with 5,709 injured and 7,115 houses lost.[ citation needed] 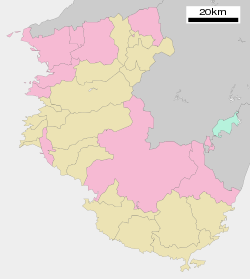 See also: List of cities in Wakayama Prefecture by population

Nine cities are in Wakayama Prefecture:

Mount Kōya (高野山, Kōya-san) in the Ito District is the headquarters of the Shingon sect of Japanese Buddhism. It is home to one of the first Japanese style Buddhist temples in Japan and remains a pilgrimage site and an increasingly popular tourist destination as people flock to see its ancient temples set amidst the towering cedar trees at the top of the mountain. The Sacred sites and pilgrimage routes in the Kii Mountain Range extend for miles throughout the prefecture and together have been recognized as Japan's 11th UNESCO World Heritage Site. [5]

Wakayama Prefecture ranks first in the production of oranges in Japan. Wakayama has its own brand of oranges, which is produced in Arida District and called 'Arida-Orange'. Arida District, where oranges have been produced for more than 400 years, [6] yields about half of the orange crops in Wakayama today. [7] Furthermore, the yield of Arida-Oranges accounts for about 10 percent of Japanese domestic production of oranges. [8]

Wakayama Prefecture has hot springs such as Shirahama, Kawayu, and Yunomine Onsen.