From Wikipedia
https://en.wikipedia.org/wiki/Vincenzo_Gonzaga,_Duke_of_Mantua
Duke of Mantua and Montferrat

He was the only son of Guglielmo Gonzaga, Duke of Mantua, and Archduchess Eleanor of Austria. [1] His maternal grandparents were Ferdinand I, Holy Roman Emperor [1] and Anna of Bohemia and Hungary.

In 1582, Vincenzo murdered in cold blood the brilliant young Scottish polymath James Crichton, an employee of his father's court, of whom Vincenzo had become crazed with jealousy. [2]

Vincenzo was a major patron of the arts and sciences, and turned Mantua into a vibrant cultural center. On September 22, 1587, Vincent was crowned the fourth Duke of Mantua, with a glitzy ceremony in which were present the highest authority of the duchy to pay homage to the new Duke of Mantua: he then moved with a ride through the city streets. [3] Vincenzo employed the composer Claudio Monteverdi and the painter Peter Paul Rubens. In 1590 Monteverdi became a viol-player and cantor in the music chapel of Vincenzo; in 1602 Vincenzo appointed him master of music on the death of Benedetto Pallavicino. Vincenzo was also a friend of the poet Torquato Tasso. A small book published in Verona in 1589 describes how a comic actor named Valerini in the service of Vincenzo imagines an ideal gallery of art, in which statues of the most important art collectors are featured rather than the work of the artists themselves. Vincenzo was described as a colossus who would dominate the entire ideal gallery, called the Celestial Gallery of Minerva. [4]

Magini's life's work was the preparation of the Atlante geografico d'Italia (Geographic Atlas of Italy), printed posthumously by Magini's son in 1620. This was intended to include maps of each Italian region with exact nomenclature and historical notes. A major project, its production (begun in 1594) proved. Vincenzo, to whom the atlas is dedicated, assisted him with this project and allowed for maps of the various states of Italy to be brought to Magini.

During the winter of 1603–1604, Galileo visited the Mantuan court in an effort to obtain a position there, and was offered a salary, but could not agree on the terms with Vincenzo, who instead presented Galileo with a gold chain and two silver dishes.

Vincenzo's spendthrift habits are considered to have accelerated Mantua's economic and cultural decline.

At the age of 46, Vincenzo was rumored to have been impotent and he is said to have sent a secret expedition to the New World in order to obtain a legendary aphrodisiac. [5]

On 20 July 1588, Emperor Rudolf II granted Vincenzo the right to an escutcheon of Austria, surmounted by an archducal coronet. Vincenzo created the Order of the Redemptor (or of the Most Precious Blood), approved by Pope Paul V, on 25 May 1608. [5] 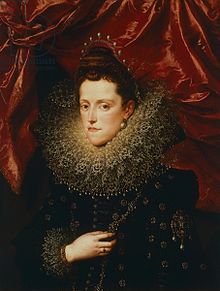 Vincenzo married Margherita Farnese in 1581; their marriage was childless and they divorced. [6] On 29 April 1584 he married his first cousin Eleonora de' Medici, [1] the daughter of Francesco I de' Medici and Joanna of Austria.

Vincenzo and Eleonora's marriage produced six children. They were:

He had several illegitimate children, including:
By the noble Agnes Argotta [ it], wife of Prospero del Carretto:

By the noble Felicita Guerrieri [ it], daughter of Tullo Guerrieri: [8]

Media related to Vincenzo I Gonzaga, Duke of Mantua at Wikimedia Commons