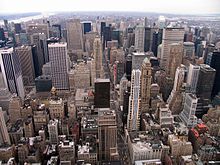 New York City, one of the largest urban areas in the world

Urban geography is the subdiscipline of geography that derives from a study of cities and urban processes. Urban geographers and urbanists [1] examine various aspects of urban life and the built environment. Scholars, activists, and the public have participated in, studied, and critiqued flows of economic and natural resources, human and non-human bodies, patterns of development and infrastructure, political and institutional activities, governance, decay and renewal, and notions of socio-spatial inclusions, exclusions, and everyday life.

Urban geographers are primarily concerned with the ways in which cities and towns are constructed, governed and experienced. Alongside neighboring disciplines such as urban anthropology, urban planning and urban sociology, urban geography mostly investigates the impact of urban processes on the earth's surface's social and physical structures. Urban geographical research can be part of both human geography and physical geography.

The two fundamental aspects of cities and towns, from the geographic perspective are: [2]

Cities as centers of manufacturing and services

Cities differ in their economic makeup, their social and demographic characteristics, and the roles they play within the city system. One can trace these differences back to regional variations in the local resources on which growth was based during the early development of the urban pattern and in part to the subsequent shifts in the competitive advantage of regions brought about by changing locational forces affecting regional specialization within the framework of a market economy. The recognition of different city types is critical for the classification of cities in urban geography. For such classification, emphasis given in particular to functional town classification and the basic underlying dimensions of the city system. [3]

The purpose of classifying cities is twofold. On the one hand, it is undertaken to search reality for hypotheses. In this context, the recognition of different types of cities on the basis of, for example, their functional specialization may enable the identification of spatial regularities in the distribution and structure of urban functions and the formulation of hypotheses about the resulting patterns. On the other hand, classification is undertaken to structure reality in order to test specific hypotheses that have already been formulated. For example, to test the hypotheses that cities with a diversified economy grow at a faster rate then those with a more specialized economic base, cities must first be classified so that diversified and specialized cities can be differentiated.

The simplest way to classify cities is to identify the distinctive role they play in the city system. There are three distinct roles:

The composition of a city's labor force has traditionally been regarded[ by whom?] as the best indicator of functional specialization, and different city types have been most frequently identified from the analysis of employment profiles. Specialization in a given activity is said to exist when employment in it exceeds some critical level. [4]

The relationship between the city system and the development of manufacturing has become very apparent. The rapid growth and spread of cities within the heartland- hinterland framework after 1870 was conditioned to a large extent by industrial developments, and the decentralization of population within the urban system in recent years is related in large part to the movement of employment in manufacturing away from traditional industrial centers. Manufacturing is found in nearly all cities, but its importance is measured by the proportion of total earnings received by the inhabitants of an urban area. When 25 percent or more of the total earnings in an urban region derive from manufacturing, that urban area is arbitrarily designated[ by whom?] as a manufacturing center.

The location of manufacturing is affected by myriad economic and non-economic factors, such as the nature of the material inputs, the factors of production, the market and transportation costs. Other important influences include agglomeration and external economies, public policy and personal preferences. Although it is difficult to evaluate precisely the effect of the market on the location of manufacturing activities, two considerations are involved:

Urbanization, the transformation of population from rural to urban, is a major phenomenon of the modern era and a central topic of study. [5]

History of the discipline

Urban geography arrived as a critical sub-discipline with the 1973 publication of David Harvey's Social Justice and the City, which was heavily influenced by previous work by Anne Buttimer. [6] Prior to its emergence as its own discipline, urban geography served as the academic extension of what was otherwise a professional development and planning practice. [7] At the turn of the 19th century, urban planning began as a profession charged with mitigating the negative consequences of industrialization as documented by Friedrich Engels in his geographic analysis of the condition of the working class in England, 1844. [8]

In a 1924 study of urban geography, Marcel Aurousseau observed that urban geography cannot be considered a subdivision of geography because it plays such an important part. However, urban geography did emerge as a specialized discipline after World War II, amidst increasing urban planning and a shift away from the primacy of physical terrain in the study of geography. Chauncy Harris and Edward Ullman were among its earliest exponents. [9] [10]

Urban geography arose by the 1930s in the Soviet Union as an academic complement to active urbanization and communist urban planning, focusing on cities' economic roles and potential. [11]

Spatial analysis, behavioral analysis, Marxism, humanism, social theory, feminism, and postmodernism have arisen (in approximately this order) as overlapping lenses used within the field of urban geography in the West. [12]