The University of Strathclyde ( Scottish Gaelic: Oilthigh Shrath Chluaidh [4]) is a public research university located in Glasgow, Scotland. Founded in 1796 as the Andersonian Institute, it is Glasgow's second-oldest university, having received its royal charter in 1964 as the first technological university in the United Kingdom. Taking its name from the historic Kingdom of Strathclyde, it is Scotland's third-largest university by number of students, with students and staff from over 100 countries. [5]

The institution was named University of the Year 2012 by Times Higher Education [6] and again in 2019, becoming the first university to receive this award twice. [7] The annual income of the institution for 2019–20 was £334.8 million of which £81.2 million was from research grants and contracts, with an expenditure of £298.8 million. [1] It is one of the 39 old universities in the UK comprising the distinctive second cluster of elite universities after Oxbridge. [8] [9]

The university was founded in 1796 through the will of John Anderson, professor of Natural Philosophy at the University of Glasgow, who left instructions and the majority of his estate to create a second university in Glasgow which would focus on "Useful Learning" – specialising in practical subjects – "for the good of mankind and the improvement of science, a place of useful learning". The University later named its city centre campus after him.

In 1828, the institution was renamed Anderson's University, partially fulfilling Anderson's vision of two universities in the city of Glasgow. The name was changed in 1887, to reflect the fact that there was no legal authority for the use of the title of 'university'. [10] As a result, the Glasgow and West of Scotland Technical College was formed, becoming the Royal Technical College in 1912, and the Royal College of Science and Technology in 1956 concentrating on science and engineering teaching and research. Undergraduate students could qualify for degrees of the University of Glasgow or the equivalent Associate of the Royal College of Science and Technology (ARCST).

The university has grown from approximately 4,000 full-time students in 1964 to over 20,000 students in 2003, when it celebrated the 100th anniversary of the laying of the foundation stone of the original Royal College building.

In July 2015, Her Majesty The Queen opened the University of Strathclyde Technology and Innovation Centre (TIC).[ citation needed] 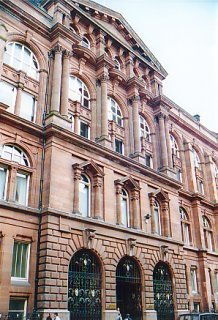 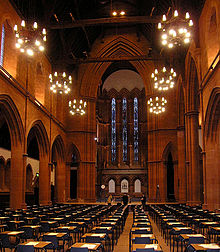 The centrepiece building has long been the massive Royal College Building. Started in 1903 and completed in 1912, it was partially opened in 1910 and at the time was the largest educational building in Europe for technical education. Originally built as the Glasgow and West of Scotland Technical College Building, it now houses Bioscience, Chemistry, and Electronic and Electrical Engineering. The building is currently undergoing major internal renovation following the relocation of the Pharmacology and Bioscience departments to new accommodation in the John Arbuthnott (SIPBS) building, and the installation of a new heating system.[ citation needed]

The Livingstone Tower is a high rise building completed in 1965. It is home to departments including, Computer and Information Sciences and Mathematics and Statistics.

Meanwhile, a new biomedical sciences building was opened in early 2010. It was designed by Shepparrd Robson, and aims to bring the multi-faceted disciplines of the Institute together under one roof. Sited on Cathedral Street in Glasgow, the 8,000 m2 building is the gateway to the University campus and city centre from the motorway.[ citation needed]

The James Weir Building has been reconstructed and reopened in 2014 after a serious fire resulted in many rooms being unusable. [12]

The University of Strathclyde Centre for Sports, Health and Wellbeing is a leisure facility undergoing construction situated adjacent to 100 Cathedral Street. Construction began in November 2016 and completed in 2019. [14] 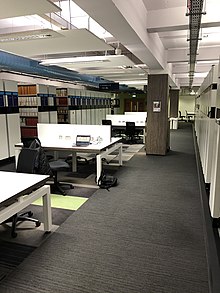 The Andersonian Library is the principal library of the University of Strathclyde. Established in 1796, it is one of the largest of its type in Scotland. It is situated in the Curran building. Situated over 5 floors at present, the Andersonian Library has more than 2,000 reader places, 450 computer places and extensive wi-fi zones for laptop use. It has around one million print volumes as well as access to over 540,000 electronic books, 239 databases and over 38,000 e-journals that can be used 24/7 from any suitably enabled computer. [15]

The archives are divided into 3 as follows. [16]

A diverse range of archives which have been acquired by gift or deposit to support the University's teaching and research.

Rare or significant printed material and books, including the Anderson Collection (the personal library of John Anderson, 1726–1796, natural philosopher), plus over 30 other collections spanning the 16th to the 21st centuries.

The University of Strathclyde Technology and Innovation Centre is a centre for technological research. The construction of this centre began in March 2012 and was completed in March 2015. The nine-storey, steel-framed building can accommodate around 1200 workers from numerous fields, including engineering, researching and project management. It includes open plan space for offices, three lecture theatres and areas for specialist laboratory equipment.

The project secured a £6.7 million funding from the European Regional Development Fund and another £26 million from the Scottish Government. The university itself supplied the other £57 million needed to reach its £89 million budget needed to create the centre. [17] [18]

In addition to the Technology and Innovation Centre, a 5000m2 Industry Engagement Building is located adjacent to the TIC building.

Research carried out in the Technology and Innovation Centre is in the fields of: Advanced Engineering and Manufacturing, Advanced Science and Technology, Bionanotechnology, Business Engagement, Continuous Manufacturing and Crystallisation (CMAC), Energy, Health Technologies at Strathclyde, Human and Social Aspects of Technology, Photonics and Sensors, and Asset Management. [19] The TIC hosts the UK's first Fraunhofer research centre, the Fraunhofer Centre for Applied Photonics and TIC also plays a major role in Scotland's International Technology and Renewable Energy Zone (ITREZ).[ citation needed]

The university currently consists of four main faculties categorised based on subjects and academic fields that they deal with and each faculty is sub divided into several departments which deal with specific academic and research areas. They are: 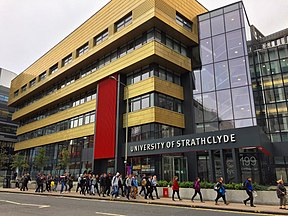 The university delivered teaching to 24,330 full-time and part-time students in 2019/20: 16,115 undergraduates and 8,215 postgraduates. [2] Another 34,000 people take part in continuing education and professional development programmes.[ citation needed] The university's main campus, John Anderson Campus, is located in the centre of Glasgow, near George Square. Till 2012, the University operated an education campus in the suburb of Jordanhill, at the site of the previous Jordanhill Teacher Training College which it disposed of and relocated to a new building in the John Anderson Campus. In January 2012, The University's Court also endorsed the recommendation of the Estates Steering Group that Strathclyde moves to a single campus by disposing of the entire Jordanhill site and constructing a new building for the Faculty of Education on the John Anderson campus. [20]

Strathclyde is the only Scottish university that offers the IET Power Academy engineering scholarships to its engineering students. [21]

The university is highly ranked among the top 10 in the UK in various subjects according to the Complete University Guide 2019, [29] namely being 1st for Accounting & Finance; 1st for Social Policy; 1st for Aural & Oral Sciences; 1st for Communication & Media Studies; 1st for Pharmacology and Pharmacy; 1st for Medical Technology; 1st for Hospitality, Leisure, Recreation & Tourism; 2nd for Marketing; 2nd for Forensic Science; 5th for Architecture; 5th for English; 6th for Business & Management Studies; 6th for Electrical & Electronic Engineering; 7th for Chemical Engineering; 8th for Civil Engineering; 8th for General Engineering and 9th for Mechanical Engineering. The university also ranked second in 2019 on social policy and administration in the national ranking according to The Guardian. [30]

Strathclyde Business School is recognized the best in Scotland and is included in the British top 10, as well as in 1% of the global business schools that have triple accreditation: AACSBInternational, EQUIS and AMBA (the only one in Scotland). Strathclyde is placed in the top 20 of European business schools in the Financial Times Global MBA Rankings . [31] In this regard,QS World University Ranking placed Strathclyde among 51-100 best universities in business management. Strathclyde Master's programs take 36th place globally in marketing, 51st place globally in business analysis and 55th globally in management, according to QS World University Ranking in 2020. [32]

The University School of Government and Public Policy has a long tradition of interacting with national and global media organizations, governments, parliaments and international organizations such as the EU and OECD. Political science therefore takes 1st place in Scotland in the terms of research intensity. According to URAP Center Ranking, which has been publishing annual rankings since 2010 for each subject, the University of Strathclyde is constantly included in the top 120 global universities in politics. [33] [34] In 2013, QS World University Ranking placed Strathclyde among 101-150 best global universities in politics and international relations. [35] In 2020, ARWU ranked Strathclyde in the 101-150 best Political Science universities. [36] Ever since ARWU began to publish a separate subject ranking on Public Administration, Strathclyde has consistently ranked internationally among 76-100 best universities in 2017, 2018, 2019 and 2020. [37]

The University of Strathclyde is a 5-star QS-rated university.

In 2011 the University's Advanced Forming Research Centre was announced as a leading partner in the first UK-wide Technology Strategy Board Catapult Centre. The Government also announced that the University is to lead the UK-wide EPSRC Centre for Innovative Manufacturing in Continuous Manufacturing and Crystallisation.

The University has become the base for the first Fraunhofer Centre to be established in the UK. Fraunhofer-Gesellschaft, Europe's largest organisation for contract research, is creating the new Fraunhofer Centre for Applied Photonics in collaboration with Strathclyde, for research in sectors including healthcare, security, energy and transport.

Strathclyde was chosen in 2012 as the exclusive European partner university for South Korea's global research and commercialisation programme – the Global Industry-Academia Cooperation Programme, funded by South Korea's Ministry of Knowledge and Economics.

In 2012 the University became a key partner in its second UK Catapult Centre. Plans for the Catapult Centre for Offshore Renewable Energy were announced at Strathclyde by Business Secretary Vince Cable. The University has also become a partner in the Industrial Doctorate Centre for Offshore Renewable Energy, which is one of 11 doctoral centres at Strathclyde.

Engineers at the University are leading the €4 million, Europe-wide Stardust project, a research-based training network investigating the removal of space debris and the deflection of asteroids.

Several Strathclyde staff have been elected to Fellowships in the Royal Societies of Edinburgh and London. [40]

There are around 15,000 undergraduate students out of which almost 4,000 are mature students who start their studies after gaining experience in the workplace, and almost 16% are overseas students from more than 100 countries around the world. Around 7,000 students are undertaking postgraduate studies at Strathclyde. There are approximately 45,000 students studying part-time in the university each year, either in the evenings and weekends or through distance learning. [41] The university also has an alumni population of over 100,000 and growing.

Alumni of Strathclyde and its predecessors (the Andersonian Institute and the Royal College of Science and Technology) include the scientists; William Ramsay, Nobel Prize Winner in Chemistry (1904); John Logie Baird, inventor of the first working television; [42] Henry Faulds, physician, missionary and scientist who developed of fingerprinting; [42] James Young, chemist best known for his method of distilling paraffin from coal and oil shales; [42] Professor John Curtice, a renowned political commentator, Fellow of the British Academy, the Royal Society of Arts and the Royal Society of Edinburgh.

Academics associated with the university include; James Blyth, generated electrical power from wind; [42] Sir Samuel Curran, inventor of the Scintillation counter; [47] Thomas Graham, chemist who formulated the law of diffusion of gases; [42] Andrew Ure, physician and founder of Andersonian Institution; [42] Matthew Charteris, taught Medicine at Anderson's from 1876 to 1880.