UNIVERSITY OF HAWAIʻI AT MāN ...

University of Hawaiʻi at Mānoa

From Wikipedia
https://en.wikipedia.org/wiki/University_of_Hawaiʻi_at_Mānoa
Flagship institution of the University of Hawaiʻi, in Honolulu, Hawaii, United States 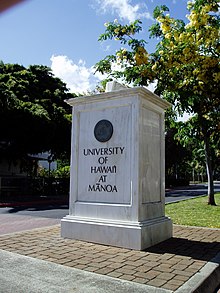 U.H. offers over 200 degree programs across 17 colleges and schools. It is accredited by the Western Association of Schools and Colleges and governed by the Hawaii State Legislature and a semi-autonomous board of regents. It also a member of the Association of Pacific Rim Universities, which represents 50 research universities across 16 countries.

In September 1912 it moved to its present location in Mānoa Valley on 90 acres of land that had been cobbled together from leased and private lands and was renamed the College of Hawaii. [12] William Kwai Fong Yap, an cashier at Bank of Hawaii, and a group of citizens petitioned the Hawaii Territorial Legislature six years later for university status which led to another renaming finally to the University of Hawaii on April 30, 1919 with the addition of the College of Arts and Sciences and College of Applied Science. [14] [13]

In the years following, the university expanded to include more than 300 acres. In 1931 the Territorial Normal and Training School was absorbed into the university, becoming Teacher's College, [14] now the College of Education.

The university continued its growth throughout the 1930s and 1940s increasing from 232 to 402 acres. The number of buildings grew from 4 to 17. Following the attack on Pearl Harbor in December 1941, classes were suspended for two months. When classes resumed, students carried gas masks to classes and bomb shelters were kept at a ready. [14]

In 1947, the university opened an extension center in Hilo on Hawai'i Island in the old Hilo Boarding School. In 1951, Hilo Center was designated the University of Hawaii Hilo Branch [14] before its reorganization by an act of the Hawai'i State Legislature in 1970. [15]

When the Territory of Hawai'i was granted statehood in 1959, the university became a constitutional agency rather than a legislative agency with the Board of Regents having oversight over the university. Enrollment continued to grow to 19,000 at the university through the 1960s and the campus became nationally recognized in research and graduate education. [15]

In 1965, the state legislature created a system of community colleges and placed it within the university. By the end of the 1960s, the University of Hawai'i very different from what it had since its beginning. It had become larger and with the addition of the community colleges, a broad range of activities extending from vocational education to community college education, which were all advanced through research and postdoctoral training. [15] 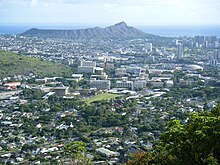 UH Mānoa campus viewed from Round Top Drive, with Diamond Head in the background

UH Mānoa, the flagship campus of the University of Hawai'i System, is a four-year research university consisting of 17 schools and colleges. In addition to undergraduate and graduate degrees in the School of Architecture, School of Earth Science and Technology, the College of Arts, Languages, and Letters, the Shidler College of Business, the College of Education and the College of Engineering, the university also maintains professional schools in law and medicine.

Originally called the College of Agriculture and Mechanic Arts of the Territory of Hawai'i, the College of Tropical Agriculture & Human Resources (CTAHR) is the founding college of the university. Programs of the college focuses on tropical agriculture, food science and human nutrition, textiles and clothing, and human resources,

The College of Arts, Languages, and Letters (CALL) is the newest and largest college at the university. It is creation of the dissolution of the College of Arts and Science and the merger of the Colleges of Arts and Humanities, Languages, Linguistics, and Literature (LLL), and the School of Pacific and Asian Studies. The college's core focus is the study of arts, humanities, languages with a particular focus on Hawai'i, the Pacific, and Asia Studies. [16]

The UH Mānoa offers an Honors Program to provide additional resources for students preparing to apply to professional school programs. [18] Students complete core curriculum courses for their degrees in the Honors Program, maintain at least a cumulative 3.2 grade-point average in all courses, and complete a senior thesis project. [19]

The University of Hawaiʻi at Mānoa Library, which provides access to 3.4 million volumes, 50,000 journals, and thousands of digitized documents, is one of the largest academic research libraries in the United States, ranking 86th in parent institution investment among 113 North American members of the Association of Research Libraries. [20]

According to U.S. News & World Report's rankings for 2021, UH Mānoa was tied at 170th overall and 159th for "Best Value" among national universities; tied at 83rd among public universities; and tied at 145th for its undergraduate engineering program among schools that confer doctorates. [33]

The university offers over 50 distance learning courses, using technology to replace either all or a portion of class instruction. Students interact with their instructors and peers from different locations to further develop their education. [34] 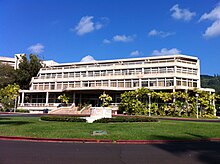 With extramural grants and contracts of $436 million in 2012, research at UH Mānoa relates to Hawaii's physical landscape, its people and their heritage. The geography facilitates advances in marine biology, oceanography, underwater robotic technology, astronomy, geology and geophysics, agriculture, aquaculture and tropical medicine. Its heritage, the people and its close ties to the Asian and Pacific region create a favorable environment for study and research in the arts, genetics, intercultural relations, linguistics, religion and philosophy. [35]

The $150-million medical complex in Kaka‘ako opened in the spring of 2005. The facility houses a biomedical research and education center that attracts significant federal funding and private sector investment in biotechnology and cancer research and development.[ citation needed]

Research (broadly conceived) is expected of every faculty member at UH Mānoa. Also, according to the Carnegie Foundation, UH Mānoa is an RU/VH (very high research activity) level research university. [38]

In 2013, UH Mānoa was elected to membership in the Association of Pacific Rim Universities, the leading consortium of research universities for the region. APRU represents 45 premier research universities—with a collective 2 million students and 120,000 faculty members—from 16 economies. [39]

U.H. is the fourth most diverse university in the U.S. [11] According to the 2010 report of the Institutional Research Office, a plurality of students at the University of Hawaiʻi at Mānoa are Caucasian, making up a quarter of the student body. The next largest groups were Japanese Americans (13%), native or part native Hawaiians (13%), Filipino Americans (8%), Chinese Americans (7%) and mixed race (12%). Pacific Islanders and other ethnic groups make up the balance (22%). 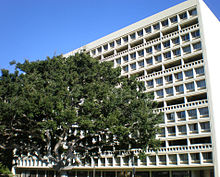 The university reserves some low-rise units for graduate students and families. [41] 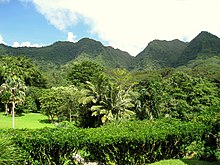 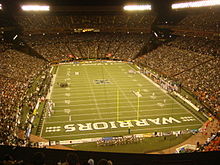 The off-campus Aloha Stadium, situated near Pearl Harbor in Honolulu, was the home of Rainbow Warrior Football from 1975 to 2020. 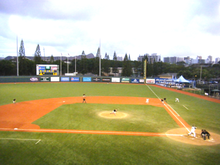 With the exception of the university's first semester, there has always been either a president, interim president, or chancellor. From 1907 to 1965, before the Hawai'i State Legislature created the University of Hawai'i System, which incorporated the technical and community colleges into the university, the president's role expanded to include oversight of all system campuses, with chancellors taking responsibility for individual campuses. As a result, the president has filled the role of chancellor at the university in addition to serving as president of the University of Hawai'i System. [46] The chancellor's position was created in 1974 and would be abolished in 1984, with Albert J. Simone becoming acting president on June 1, 1984. [15]

In 2001, the position of chancellor was recreated [47] by then-UH System president Evan Dobelle over conflict of interest concerns, but was again abolished in April 2019. [48]

Notable alumni of the University of Hawaiʻi at Mānoa include:

Notable faculty of the University of Hawaiʻi at Mānoa include:

These artworks are off the main campus: