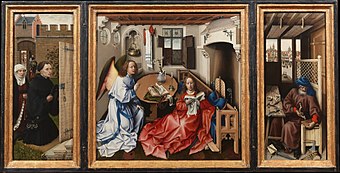 The Merode Altarpiece, attributed to the workshop of Robert Campin, c. 1427–32 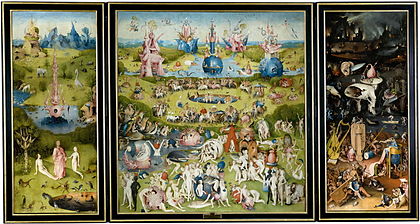 The Aino Myth, the Kalevala based triptych painted by Akseli Gallen-Kallela in 1891. Ateneum, Helsinki

A triptych ( /ˈtrɪptɪk/ TRIP-tik; from the Greek adjective τρίπτυχον "triptukhon" ("three-fold"), from tri, i.e., "three" and ptysso, i.e., "to fold" or ptyx, i.e., "fold") [1] [2] is a work of art (usually a panel painting) that is divided into three sections, or three carved panels that are hinged together and can be folded shut or displayed open. It is therefore a type of polyptych, the term for all multi-panel works. The middle panel is typically the largest and it is flanked by two smaller related works, although there are triptychs of equal-sized panels. The form can also be used for pendant jewelry.

Beyond its association with art, the term is sometimes used more generally to connote anything with three parts, particularly if integrated into a single unit. [3]

The triptych form appears in early Christian art, and was a popular standard format for altar paintings from the Middle Ages onwards. Its geographical range was from the eastern Byzantine churches to the Celtic churches in the west. During the Byzantine period, triptychs were often used for private devotional use, along with other relics such as icons. [4] Renaissance painters such as Hans Memling and Hieronymus Bosch used the form. Sculptors also used it. Triptych forms also allow ease of transport.

From the Gothic period onward, both in Europe and elsewhere, altarpieces in churches and cathedrals were often in triptych form. One such cathedral with an altarpiece triptych is Llandaff Cathedral. The Cathedral of Our Lady in Antwerp, Belgium, contains two examples by Rubens, and Notre Dame de Paris is another example of the use of triptych in architecture. The form is echoed by the structure of many ecclesiastical stained glass windows. Although strongly identified as an altarpiece form, triptychs outside that context have been created, some of the best-known examples being works by Hieronymus Bosch, Max Beckmann, and Francis Bacon.

The format has migrated and been used in other religions, including Islam and Buddhism. For example: the triptych Hilje-j-Sherif displayed at the National Museum of Oriental Art, Rome, Italy, and a page of the Qur'an at the Museum of Turkish and Islamic Arts in Istanbul, Turkey, exemplify Ottoman religious art adapting the motif. [7] Likewise, Tibetan Buddhists have used it in traditional altars. [8]

A photographic triptych is a common style used in modern commercial artwork. The photographs are usually arranged with a plain border between them. The work may consist of separate images that are variants on a theme, or may be one larger image split into three. [9] [10] [11]