From Wikipedia
https://en.wikipedia.org/wiki/Trapezoid
Convex quadrilateral with at least one pair of parallel sides
For other uses, see Trapezoid (disambiguation) and Trapezium (disambiguation).

In Euclidean geometry, a convex quadrilateral with at least one pair of parallel sides is referred to as a trapezium ( /trəˈpiːziəm/) in English outside North America, but as a trapezoid [1] [2] ( /ˈtræpəzɔɪd/) in American and Canadian English. The parallel sides are called the bases of the trapezoid and the other two sides are called the legs or the lateral sides (if they are not parallel; otherwise there are two pairs of bases). A scalene trapezoid is a trapezoid with no sides of equal measure, [3] in contrast with the special cases below.

Etymology and trapezium vs trapezoid

Two types of trapezia were introduced by Proclus (412 to 485 AD) in his commentary on the first book of Euclid's Elements: [4] [7]

All European languages follow Proclus's structure [7] [8] as did English until the late 18th century, until an influential mathematical dictionary published by Charles Hutton in 1795 supported without explanation a transposition of the terms. This mistake was corrected in British English in about 1875, but was retained in American English into the modern day. [4]

This article uses the term trapezoid in the sense that is current in the United States and Canada. The shape is often called an irregular quadrilateral. [9] [10] 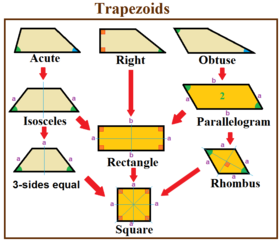 A right trapezoid (also called right-angled trapezoid) has two adjacent right angles. [12] Right trapezoids are used in the trapezoidal rule for estimating areas under a curve.

An isosceles trapezoid is a trapezoid where the base angles have the same measure. As a consequence the two legs are also of equal length and it has reflection symmetry. This is possible for acute trapezoids or right trapezoids (rectangles).

A parallelogram is a trapezoid with two pairs of parallel sides. A parallelogram has central 2-fold rotational symmetry (or point reflection symmetry). It is possible for obtuse trapezoids or right trapezoids (rectangles).

A tangential trapezoid is a trapezoid that has an incircle.

Four lengths a, c, b, d can constitute the consecutive sides of a non-parallelogram trapezoid with a and b parallel only when [14]

The quadrilateral is a parallelogram when

, but it is an ex-tangential quadrilateral (which is not a trapezoid) when 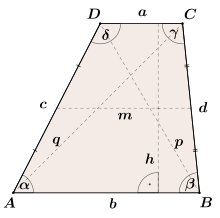 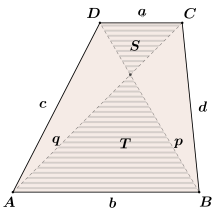 formed by the diagonals

Given a convex quadrilateral, the following properties are equivalent, and each implies that the quadrilateral is a trapezoid:

Additionally, the following properties are equivalent, and each implies that opposite sides a and b are parallel:

The midsegment (also called the median or midline) of a trapezoid is the segment that joins the midpoints of the legs. It is parallel to the bases. Its length m is equal to the average of the lengths of the bases a and b of the trapezoid, [12]

The midsegment of a trapezoid is one of the two bimedians (the other bimedian divides the trapezoid into equal areas).

The height (or altitude) is the perpendicular distance between the bases. In the case that the two bases have different lengths (a ≠ b), the height of a trapezoid h can be determined by the length of its four sides using the formula [12]

where c and d are the lengths of the legs.

where a and b are the lengths of the parallel sides, h is the height (the perpendicular distance between these sides), and m is the arithmetic mean of the lengths of the two parallel sides. In 499 AD Aryabhata, a great mathematician- astronomer from the classical age of Indian mathematics and Indian astronomy, used this method in the Aryabhatiya (section 2.8). This yields as a special case the well-known formula for the area of a triangle, by considering a triangle as a degenerate trapezoid in which one of the parallel sides has shrunk to a point.

The 7th-century Indian mathematician Bhāskara I derived the following formula for the area of a trapezoid with consecutive sides a, c, b, d:

where a and b are parallel and b > a. [16] This formula can be factored into a more symmetric version [12]

When one of the parallel sides has shrunk to a point (say a = 0), this formula reduces to Heron's formula for the area of a triangle.

Another equivalent formula for the area, which more closely resembles Heron's formula, is [12]

is the semiperimeter of the trapezoid. (This formula is similar to Brahmagupta's formula, but it differs from it, in that a trapezoid might not be cyclic (inscribed in a circle). The formula is also a special case of Bretschneider's formula for a general quadrilateral).

From Bretschneider's formula, it follows that

The line that joins the midpoints of the parallel sides, bisects the area.

The lengths of the diagonals are [12]

where a is the short base, b is the long base, and c and d are the trapezoid legs.

If the trapezoid is divided into four triangles by its diagonals AC and BD (as shown on the right), intersecting at O, then the area of

AOD is equal to that of

BOC, and the product of the areas of

BOC is equal to that of

COD. The ratio of the areas of each pair of adjacent triangles is the same as that between the lengths of the parallel sides. [12]

Let the trapezoid have vertices A, B, C, and D in sequence and have parallel sides AB and DC. Let E be the intersection of the diagonals, and let F be on side DA and G be on side BC such that FEG is parallel to AB and CD. Then FG is the harmonic mean of AB and DC: [17]

The center of area (center of mass for a uniform lamina) lies along the line segment joining the midpoints of the parallel sides, at a perpendicular distance x from the longer side b given by [19]

The center of area divides this segment in the ratio (when taken from the short to the long side) [20]: p. 862 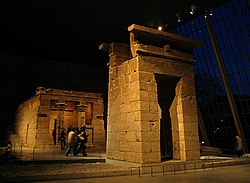 In architecture the word is used to refer to symmetrical doors, windows, and buildings built wider at the base, tapering toward the top, in Egyptian style. If these have straight sides and sharp angular corners, their shapes are usually isosceles trapezoids. This was the standard style for the doors and windows of the Inca. [21]

The crossed ladders problem is the problem of finding the distance between the parallel sides of a right trapezoid, given the diagonal lengths and the distance from the perpendicular leg to the diagonal intersection. 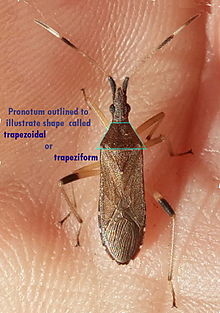 Example of a trapeziform pronotum outlined on a spurge bug

In morphology, taxonomy and other descriptive disciplines in which a term for such shapes is necessary, terms such as trapezoidal or trapeziform commonly are useful in descriptions of particular organs or forms. [22]

In computer engineering, specifically digital logic and computer architecture, trapezoids are typically utilized to symbolize multiplexors. Multiplexors are logic elements that select between multiple elements and produce a single output based on a select signal. Typical designs will employ trapezoids without specifically stating they are multiplexors as they are universally equivalent.