From Wikipedia
https://en.wikipedia.org/wiki/Tito_Jackson
Singer and member of The Jackson 5
This article is about a member of the Jackson family. For the former Boston City Council member, see Tito Jackson (politician).

Toriano Adaryll "Tito" Jackson (born October 15, 1953) is an American singer-songwriter and guitarist. Jackson was an original member of The Jackson 5 (later known as The Jacksons), who rose to fame in the late 1960s and 1970s with the Motown label, and later had continued success with the group on the Epic label in the late 1970s and 1980s. Tito is the third child in the Jackson family.

Toriano Adaryll Jackson was born at St Mary's Mercy Hospital, [1] He is the third of ten children in a black working-class family who lived in a two-room house in Gary, Indiana. His father, Joseph, was a steel mill worker. His mother, Katherine, is a devout Jehovah's Witness. At ten years of age, he was caught playing his father's guitar after he broke a string. [2] After fixing the string, Joe demanded that his son play for him. Once he was finished, Jackson's father bought him his own guitar. Shortly thereafter, Joseph convinced Tito, Jackie, and Jermaine to form a singing group, having been impressed with the vocals of Jackie and Jermaine.[ citation needed]

After first performing in school functions and supermarkets, the brothers began participating in local talent shows when Jackson was twelve. By then, his younger brother Michael, then seven, had become the official lead singer of the group. In 1965, they changed their name from the Jackson Brothers to the Jackson Five, and won several talent shows around the Gary area. After winning the Amateur Night competition for The Apollo Theater in August 1967, Joe Jackson began to work part-time at the steel mill to help his sons secure a recording contract. The group signed with Steeltown Records in Gary, Indiana, in November of that year. In January 1968, the Jackson Five's first single, " Big Boy," was released on the Steeltown label. [3]

In 1969, the Jackson 5 signed with Motown Records in Detroit, and scored several hit songs, including the number-one singles " I Want You Back," " ABC," " The Love You Save," and " I'll Be There", but despite his talent as a guitar player, Motown refused to allow Tito to perform guitar on any of the Jackson 5 recording sessions, instead forcing all their guitar parts to be performed by session musicians. As a direct result, Tito's guitar work did not make its debut until he and the Jacksons left Motown for CBS Records in 1976. He also began writing songs with his brothers during this time. Throughout his tenure as a Jackson 5 and Jacksons member, Tito can be heard on many album recordings, such as "Zippee Doo Da" and "Man Of War." Tito, along with Jackie, were the most consistently present members of the Jacksons, with Jermaine, Marlon, Michael, and Randy leaving at different times. After the end of the Victory Tour, Tito performed session work and as a record producer. After releasing 2300 Jackson Street, the Jacksons ceased recording work.

After years managing his family group featuring his sons, 3T, Jackson returned to the national spotlight after reuniting with his brothers on Michael's 30th anniversary concert special at Madison Square Garden.

Solo work and other projects

Jackson performing at the Motown 50th anniversary in Detroit, 2009

Jackson began a solo career in 2003 performing as a blues musician in various clubs with his band, which included producer and guitarist Angelo Earl, and a management team that included Ed Tate. In 2007, in the United Kingdom, Jackson appeared as a judge on the BBC celebrity singing competition Just the Two of Us for series two of the show. He replaced singer Lulu, who was a judge on series one. His co-judges were vocal coach CeCe Sammy, musician Stewart Copeland, and radio DJ Trevor Nelson. During the tenure of his brothers' reality series, The Jacksons: A Family Dynasty (2009), which was produced, released, and transmitted after his brother Michael had died, he served as one of the executive producers alongside his other brothers.

In 2016, Tito Jackson joined his brothers and sisters and scored his first solo hit on the Billboard charts with the single, "Get It Baby," featuring Big Daddy Kane from his album Tito Time [4] becoming the ninth and final Jackson family sibling to place a solo single on the charts. [5] The album was released in Japan late in 2016, and in the U.S on iTunes in April 2017. Since its launch, three singles have been released to radio in the US. The first single, "When the Magic Happens", featuring Jocelyn Brown, was released on April 1, 2017. Jackson launched the album for the UK market in September 2017. 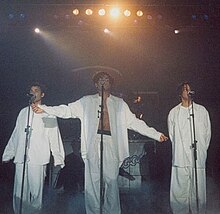 Jackson married Delores "Dee Dee" Martes in June 1972 at the age of 18, and the couple divorced in 1988. [6] [7] [8] In 1994, Martes was found dead floating in a swimming pool. The death was originally ruled accidental; however, a Los Angeles businessman, Donald Bohana, was subsequently charged with murdering her and later found guilty of second-degree murder in 2000. [9] He was sentenced to 15 years of life in prison.

The couple had three sons, who comprise the musical group 3T: