From Wikipedia
https://en.wikipedia.org/wiki/Tied_island
Island that is connected to land only by a tombolo
Not to be confused with Tidal island.

View from the Isle of Portland looking towards the mainland of Great Britain. Chesil Beach on the left connects the tied island to the mainland 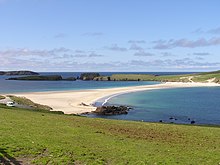 St Ninian's Isle, a tied island during all but the very highest tides

Tied islands, or land-tied islands as they are often known, are landforms consisting of an island that is connected to land only by a tombolo: a spit of beach materials connected to land at both ends. St Ninian's Isle, in the Shetland Islands off the north coast of Scotland, is an example of this; it was once an island but is now linked to the Mainland. Other examples include: Maury Island, Washington in the Puget Sound, Coronado, California and Nahant, Massachusetts in the U.S.; Barrenjoey, New South Wales in Australia; Wedge Island in Western Australia; Cheung Chau in Hong Kong and Davaar Island, Campbeltown, Scotland.

The Isle of Portland is also described as a tied island, although geographers now believe that Chesil Beach (which connects the island to the mainland) is a barrier beach that has moved eastwards, rather than a tombolo, which would have been formed by the effect of the island on waves.

Paniquian Island (also known as Isla Boquete) is a tied island in Puerto Galera, a popular tourist destination in the Philippines. The island is connected to the main island of Mindoro by a small tombolo that is only submerged a few times per year.