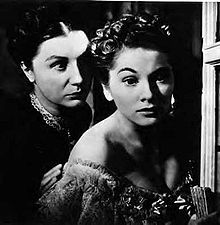 A common theme in thrillers involves innocent victims dealing with deranged adversaries, as seen in Hitchcock's film Rebecca (1940), where Mrs. Danvers tries to persuade Mrs. De Winter to leap to her death.

Thriller film, also known as suspense film or suspense thriller, is a broad film genre that evokes excitement and suspense in the audience. [1] The suspense element found in most films' plots is particularly exploited by the filmmaker in this genre. Tension is created by delaying what the audience sees as inevitable, and is built through situations that are menacing or where escape seems impossible. [2]

The cover-up of important information from the viewer, and fight and chase scenes are common methods. Life is typically threatened in a thriller film, such as when the protagonist does not realize that they are entering a dangerous situation. Thriller films' characters conflict with each other or with an outside force, which can sometimes be abstract. The protagonist is usually set against a problem, such as an escape, a mission, or a mystery. [3]

Screenwriter and scholar Eric R. Williams identifies thriller films as one of eleven super-genres in his screenwriters' taxonomy, claiming that all feature length narrative films can be classified by these super-genres.[ undue weight? – discuss] The other ten super-genres are action, crime, fantasy, horror, romance, science fiction, slice of life, sports, war, and Western. [4] Thriller films are typically hybridized with other super-genres; hybrids commonly including: action thrillers, fantasy and science fiction thrillers. Thriller films also share a close relationship with horror films, both eliciting tension. In plots about crime, thriller films focus less on the criminal or the detective and more on generating suspense. Common themes include, terrorism, political conspiracy, pursuit and romantic triangles leading to murder. [3]

In 2001, the American Film Institute made its selection of the top 100 greatest American "heart-pounding" and "adrenaline-inducing" films of all time. The 400 nominated films had to be American-made films whose thrills have "enlivened and enriched America's film heritage". AFI also asked jurors to consider "the total adrenaline-inducing impact of a film's artistry and craft". [5] [3] 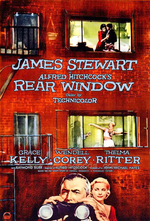 Receiving four Academy Award nominations, Rear Window is considered to be one of Hitchcock's best [6] and one of the greatest movies ever made.

One of the earliest thriller films was Harold Lloyd's comedy Safety Last! (1923), with a character performing a daredevil stunt on the side of a skyscraper. Alfred Hitchcock's first thriller was his third silent film, The Lodger: A Story of the London Fog (1926), a suspenseful Jack the Ripper story. His next thriller was Blackmail (1929), his and Britain's first sound film. [7] [8] His notable 1930s thrillers include The Man Who Knew Too Much (1934), The 39 Steps (1935) and The Lady Vanishes (1938), the latter two ranked among the greatest British films of the 20th century. [9]

One of the earliest spy films was Fritz Lang's Spies (1928), the director's first independent production, with an anarchist international conspirator and criminal spy character named Haghi (Rudolf Klein-Rogge), who is pursued by good-guy Agent No. 326 (Willy Fritsch)—this film would be an inspiration for the future James Bond films. The German film M (1931), directed by Fritz Lang, starred Peter Lorre (in his first film role) as a criminal deviant who preys on children.

In the late 1940s, Hitchcock added Technicolor to his thrillers, now with exotic locales. Hitchcock's first Technicolor film was Rope (1948). He reached the zenith of his career with a succession of classic films such as, Strangers on a Train (1951), Dial M For Murder (1954), Rear Window (1954) and Vertigo (1958). Non-Hitchcock thrillers of the 1950s include The Night of the Hunter (1955)— Charles Laughton's only film as director—and Orson Welles's crime thriller Touch of Evil (1958).

Director Michael Powell's Peeping Tom (1960) featured Carl Boehm as a psychopathic cameraman. After Hitchcock's classic films of the 1950s, he produced Psycho (1960) about a lonely, mother-fixated motel owner and taxidermist. J. Lee Thompson's Cape Fear (1962), with Robert Mitchum, had a menacing ex-con seeking revenge. A famous thriller at the time of its release was Wait Until Dark (1967) by director Terence Young, with Audrey Hepburn as a victimized blind woman in her Manhattan apartment.

The 1970s saw an increase of violence in the thriller genre, beginning with Canadian director Ted Kotcheff's Wake in Fright (1971), which almost completely overlapped with the horror genre, and Frenzy (1972), Hitchcock's first British film in almost two decades, which was given an R rating for its vicious and explicit strangulation scene.

One of the first films about a fan's being disturbingly obsessed with their idol was Clint Eastwood's directorial debut, Play Misty for Me (1971), about a California disc jockey pursued by a disturbed female listener ( Jessica Walter). John Boorman's Deliverance (1972) followed the perilous fate of four Southern businessmen during a weekend's trip. In Francis Ford Coppola's The Conversation (1974), a bugging-device expert ( Gene Hackman) systematically uncovered a covert murder while he himself was being spied upon.

Alan Pakula's The Parallax View (1974) told of a conspiracy, led by the Parallax Corporation, surrounding the assassination of a presidential-candidate US Senator that was witnessed by investigative reporter Joseph Frady ( Warren Beatty). Peter Hyam's science fiction thriller Capricorn One (1978) proposed a government conspiracy to fake the first mission to Mars.

Brian De Palma usually had themes of guilt, voyeurism, paranoia, and obsession in his films, as well as such plot elements as killing off a main character early on, switching points of view, and dream-like sequences. His notable films include Sisters (1973); Obsession (1976), which was slightly inspired by Vertigo; Dressed to Kill (1980); and the assassination thriller Blow Out (1981).

In the early 1990s, thrillers had recurring elements of obsession and trapped protagonists who must find a way to escape the clutches of the villain—these devices influenced a number of thrillers in the following years. Rob Reiner's Misery (1990), based on a book by Stephen King, featured Kathy Bates as an unbalanced fan who terrorizes an incapacitated author ( James Caan) who is in her care. Other films include Curtis Hanson's The Hand That Rocks the Cradle (1992) and Unlawful Entry (1992), starring Ray Liotta. [10]

Detectives/FBI agents hunting down a serial killer was another popular motif in the 1990s. A famous example is Jonathan Demme's Best Picture–winning crime thriller The Silence of the Lambs (1991)—in which young FBI agent Clarice Starling ( Jodie Foster) engages in a psychological conflict with a cannibalistic psychiatrist named Hannibal Lecter ( Anthony Hopkins) while tracking down serial killer Buffalo Bill—and David Fincher's crime thriller Seven (1995), about the search for a serial killer who re-enacts the seven deadly sins.

Another notable example is Martin Scorsese's neo-noir psychological thriller Shutter Island (2010), in which a U.S. Marshal must investigate a psychiatric facility after one of the patients inexplicably disappears.

Action thriller is a blend of both action and thriller film in which the protagonist confronts dangerous adversaries, obstacles, or situations which he/she must conquer, normally in an action setting. Action thrillers usually feature a race against the clock, weapons and explosions, frequent violence, and a clear antagonist. [12] Examples include, Phantom Raiders, Nick Carter Master Detective, Dirty Harry, Taken, [13] The Fugitive, [14] Snakes on a Plane, Speed, The Dark Knight, The Hurt Locker, [15] The Terminator, Battle Royale, the Die Hard series, and the Bourne series. [16]

Conspiracy thriller a genre in which the hero/heroine confronts a large, powerful group of enemies whose true extent only she/he recognizes. The Chancellor Manuscript and The Aquitaine Progression by Robert Ludlum fall into this category, as do films such as Awake, Snake Eyes, The Da Vinci Code, Edge of Darkness, [17] Absolute Power, Marathon Man, In the Line of Fire, Capricorn One, and JFK. [18]

Crime thriller as an genre is a hybrid type of both crime films and thrillers, which offers a suspenseful account of a successful or failed crime or crimes. Such films often focus on the criminal(s) rather than a policeman[ citation needed]. Central topics include serial killers/murders, robberies, chases, shootouts, heists, and double-crosses. Some examples of crime thrillers involving murderers are Seven, [19] No Country for Old Men, Heat, The Fugitive, New Jack City, The Silence Of The Lambs, Untraceable, Mindhunters, [20] Kiss the Girls, Along Came a Spider, Collateral, and Copycat. [21] Examples of crime thrillers involving heists or robberies are The Asphalt Jungle, [22] The Score, [23] Rififi, Entrapment, [24] Heat, and The Killing.

Giallo is an Italian thriller film that contains elements of mystery, crime fiction, slasher, psychological thriller, and psychological horror. It deals with an unknown killer murdering people, with the protagonist having to find out who the killer is. The genre was popular during the late 1960s-late 1970s and is still being produced today, albeit less commonly. Examples include The Girl Who Knew Too Much, Blood and Black Lace, Deep Red, The Red Queen Kills Seven Times, Don't Torture a Duckling, Tenebrae, Opera , and Sleepless.

Legal thriller is a suspense film in which the major characters are lawyers and their employees. The system of justice itself is always a major part of these works, at times almost functioning as one of the characters. Examples include The Pelican Brief, Presumed Innocent, The Jury, The Client, The Lincoln Lawyer, Hostile Witness, and Silent Witness.

Pandemic thriller is a type of disaster and thriller film in which uses popularity of pandemic-themed with suspense. Example included Contagion, Deranged, Flu, and Outbreak.

Political thriller is a type of film in which the hero/heroine must ensure the stability of the government. The success of Seven Days in May (1962) by Fletcher Knebel, The Day of the Jackal (1971) by Frederick Forsyth, and The Manchurian Candidate (1959) by Richard Condon established this subgenre. Other examples include Topaz, Notorious, The Man Who Knew Too Much, The Interpreter, [28] Proof of Life, [29] State of Play, and The Ghost Writer.

Psychological thriller film is a psychological type of film (until the often violent resolution), the conflict between the main characters is mental and emotional rather than physical. Characters, either by accident or their own curiousness, are dragged into a dangerous conflict or situation that they are not prepared to resolve. To overcome their brutish enemies characters are reliant not on physical strength but on their mental resources. This subgenre usually has elements of drama, as there is an in-depth development of realistic characters who must deal with emotional struggles. [30] The Alfred Hitchcock films Suspicion, Shadow of a Doubt, and Strangers on a Train, as well as David Lynch's bizarre and influential Blue Velvet, are notable examples of the type, as are The Talented Mr. Ripley, The Machinist, [31] Flightplan, Shutter Island, Secret Window, Identity, Gone Girl, Red Eye, [32] Phone Booth, Fatal Attraction, The River Wild, [33] Panic Room, [34] Misery, Cape Fear, 10 Cloverfield Lane, and Funny Games. [35]

Social thriller are a thriller that uses suspense to augment attention to abuses of power and instances of oppression in society. This new subgenre gained notoriety in 2017 with the release of Get Out. [36] Other examples include The Tall Man, Dirty Pretty Things, Parasite, and The Constant Gardner.

Spy film is a genre in which the protagonist is generally a government agent who must take violent action against agents of a rival government or (in recent years) terrorists. The subgenre often deals with the subject of espionage in a realistic way (as in the adaptations of John Le Carré's novels). It is a significant aspect of British cinema, [37] with leading British directors such as Alfred Hitchcock and Carol Reed making notable contributions, and many films set in the British Secret Service. [38] Thrillers within this subgenre include Berlin Express, Spy Game, Hanna, Traitor, Tinker Tailor Soldier Spy, The Tourist, The Parallax View, The Tailor of Panama, Mission Impossible, Unknown, The Recruit, the James Bond franchise, The Debt, The Good Shepherd, and Three Days of the Condor. [39]

Supernatural thriller films include an otherworldly element (such as fantasy or the supernatural) mixed with tension, suspense, or plot twists. Sometimes the protagonist or villain has some psychic ability and superpowers. Examples include Fallen, [40] Frequency, In Dreams, [41] Flatliners, Jacob's Ladder, The Skeleton Key, [42] What Lies Beneath, Unbreakable, The Sixth Sense, [43] The Gift, [44] The Dead Zone, and Horns. [45]

Techno-thriller is a suspenseful film in which the manipulation of sophisticated technology plays a prominent part. Examples include The Thirteenth Floor, I, Robot, Source Code, Eagle Eye, Supernova, Hackers, The Net, Futureworld, eXistenZ, and Virtuosity.