"Thriller" is a song recorded by American singer Michael Jackson. It was released as a single by Epic Records in November 1983 in the UK, and on January 23, 1984 in the U.S., as the seventh and final single from Jackson's sixth studio album of the same name. [2] "Thriller" is a mix of disco and funk. The song was produced by Quincy Jones and written by Rod Temperton, who wanted to write a theatrical song to suit Jackson's love of film. The music and lyrics evoke horror films, with sound effects such as thunder, footsteps and wind. It ends with a spoken-word sequence performed by horror actor Vincent Price.

"Thriller" received positive reviews and became the album's seventh top-ten single on the Billboard Hot 100, peaking at number four. It reached the top of the charts in Belgium, France and Spain as well as the top 10 in many other countries. "Thriller" is certified 7x Platinum by the Recording Industry Association of America (RIAA). In the week of Jackson's death in 2009, it was Jackson's bestselling track in the US, with sales of 167,000 copies on the Billboard Hot Digital Tracks chart. [3] It charted on the Billboard Hot Digital Singles Chart at number two, and remained in the charts' top ten for three consecutive weeks. [4]

"Thriller" won a Grammy Award. [5] It is often cited as a pop culture phenomenon and a Halloween anthem. [6] It appears on several of Jackson's greatest hits albums and has been covered by numerous artists. The "Thriller" music video was directed by John Landis and premiered on MTV on December 2, 1983. [7] In the video, Jackson becomes a zombie and performs a dance routine with a horde of the undead. Many elements of the video have had a lasting impact on popular culture, such as the zombie dance and Jackson's red jacket, and it was the first music video inducted into the National Film Registry. It has been named the greatest video of all time by various publications and readers' polls. [8]

"Thriller" was written by English songwriter Rod Temperton, who had previously written for Jackson's 1979 album Off the Wall. [9] Temperton wanted to write something theatrical to suit Jackson's love of film. [9] He improvised with bass and drum patterns until he developed the bassline that runs through the song, then wrote a chord progression that built to a climax. [9] He recalled: "I wanted it to build and build – a bit like stretching an elastic band throughout the tune to heighten suspense." [9]

Temperton's first version was titled "Starlight", with the chorus lyric: "Give me some starlight / Starlight sun". [10] The production team, led by Quincy Jones, felt the song should be the title track, but that "Starlight" was not a strong album title. Instead, they wanted something "mysterious to match Michael's evolving persona". [9] Temperton considered several possible titles, including "Midnight Man", which Jones felt was "going in the right direction". Finally, he conceived "Thriller", but worried that it was "a crap word to sing ... It sounded terrible! However, we got Michael to spit it into the microphone a few times and it worked." [9]

With the title settled, Temperton wrote lyrics within "a couple of hours". [9] He envisioned a spoken-word sequence for the end of the song, but did not know what form it should take. It was decided to have a famous voice from the horror genre perform it, and Jones' then-wife, Peggy Lipton, suggested her friend Vincent Price. [11] Temperton composed the words for Price's part in a taxi on the way to the studio on the day of recording. [11]

"Thriller" is a disco- funk song. [12] Set in the key of C# minor, [13] it has a moderate tempo of 120 beats per minute. [14] The instrumentation consists of a Minimoog synthesizer, [15] a Linn LM-1 drum machine, a Roland Jupiter-8 synthesizer, an electric guitar, a Rhodes piano, a pipe organ, and a horn section consisting of trumpet, trombone, flugelhorn, saxophone, and flute.[ citation needed] The backing track, especially the bassline, has certain similarities to the 1981 number-one R&B hit " Give It to Me Baby" by Rick James. [16] At the beginning of the song, sound effects such as a creaking door, thunder, feet walking on wooden planks, winds and howling dogs are used. [11] 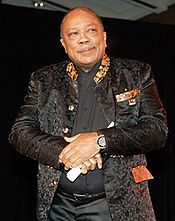 "Thriller", along with the rest of the album, was recorded over eight weeks in 1982. [17] It was recorded at Westlake Recording Studios on Santa Monica Boulevard in Los Angeles, California. [11]

Engineer Bruce Swedien had Jackson record his vocals in different approaches, doubling takes and recording at different distances from the microphone. Some background vocals were recorded in the Westlake shower stall. [11] The bassline was recorded with two modified Minimoog synthesizers playing in unison. [15]

To record the wolf howls, Swedien set up tape recorders up around his Great Dane in a barn overnight, but the dog never howled. Instead, Jackson recorded the howls himself. [18] For the creaking doors, Swedien rented doors specially designed for sound effects from the Universal Studios Lot and recorded the hinges. [18] Price recorded his part in two takes; Jones, acknowledging that doing a voice-over for a song is "difficult", praised Price and described his takes as "fabulous". [11]

"Thriller" was the final single released from the album. It was not initially planned for release, as, according to Epic executive Walter Yetnikoff, "Who wants a single about monsters?" [19] By mid-1983, sales of Thriller began to decline. Jackson, who was "obsessive" about his sales figures, [19] urged record executives Walter Yetnikoff and Larry Stessel to help conceive a plan to return the album to the top of the charts. Jackson's manager Frank DiLeo suggested releasing "Thriller", backed by a new music video. [19] [20]

The song has returned to the charts several times in recent years due to increased popularity around the time of Halloween. "Thriller" re-entered the Billboard Hot 100 in October 2013 at number 42 [36] and in November 2018 at number 31. [37]

Ashley Lasimone, of AOL's Spinner.com, noted that it "became a signature for Jackson" and described "the groove of its bassline, paired with Michael's killer vocals and sleek moves" as having "produced a frighteningly great single." [43] Jon Pareles of The New York Times noted that "'Billie Jean', 'Beat It', 'Wanna Be Startin' Somethin' ' and "the movie in the song 'Thriller'", were the songs, unlike the "fluff" "P.Y.T.", that were "the hits that made Thriller a world-beater; along with Mr. Jackson's stage and video presence, listeners must have identified with his willingness to admit terror." [44] Ann Powers of the Los Angeles Times described "Thriller" as "adequately groovy" with a "funked-out beat" and lyrics "seemingly lifted from some little kid's 'scary storybook'". [45] [46]

The music video for "Thriller" references numerous horror films, [19] and stars Jackson performing a dance routine with a horde of the undead. [19] It was directed by horror director John Landis and written by Landis and Jackson. Jackson contacted Landis after seeing his film An American Werewolf in London. The pair conceived a 13-minute short film with a budget much larger than previous music videos. Jackson's record company refused to finance it, believing Thriller had peaked, so a making-of documentary, Making Michael Jackson's Thriller, was produced to receive financing from television networks. [19]

Michael Jackson's Thriller premiered on MTV on December 2, 1983. [7] It was launched to great anticipation and played regularly on MTV. [7] It doubled sales of Thriller, and sold over a million copies on VHS, becoming the bestselling videotape at the time. [19] It is credited for transforming music videos into a serious art form, breaking down racial barriers in popular entertainment, and popularizing the making-of documentary format. [47]

Many elements have had a lasting impact on popular culture, such as the zombie dance and Jackson's red jacket, designed by Landis' wife Deborah Nadoolman. [47] Fans worldwide re-enact its zombie dance and it remains popular on YouTube. The Library of Congress described it as "the most famous music video of all time". In 2009, it became the first music video inducted into the National Film Registry as "culturally, historically or aesthetically" significant. [19]

In October 2010, it was found that GK Films plans to produce a horror film inspired by the song, directed by Kenny Ortega and produced with Ivan Reitman. [103] [104] As of 2020, there has been no further news.