An officer of three-star rank is a senior commander in many of the armed services holding a rank described by the NATO code of OF-8. The term is also used by some armed forces which are not NATO members. Typically, three-star officers hold the rank of vice admiral, lieutenant general, or in the case of those air forces with a separate rank structure, air marshal.

In the Australian Defence Force the following ranks of commissioned officers are awarded three-star ranks:

Official rank insignia for Australian 'three-star' officers do not use stars in the same fashion as the United States. The RAN does incorporate stars into the hardboard rank insignia for flag-rank officers but this is in conjunction with other devices. Unofficial star rank insignia are sometimes worn when serving with or visiting other military organisations in order to facilitate equivalent rank recognition.[ citation needed]

The three-star rank in Brazil is the second rank in a general career. The officers in this position are normally divisional commanders.

Three maple leaves appear with St. Edward's crown and crossed sabre and baton. Prince Charles holds the rank of vice-admiral in an honorary capacity. Before unification, the rank of air marshal was the three-star equivalent for the RCAF.

The equivalent modern German three-star ranks ( OF-8) of the Bundeswehr are as follows:

Not to be confused with the Generalleutnant and Vizeadmiral ( two-star ranks; OF-7) of the Wehrmacht until 1945 or the National People's Army (East Germany) until 1990. 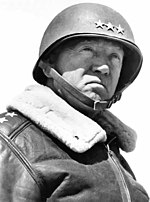 Russia and the USSR

In the Russian and Soviet armies, the three-star rank is colonel-general (Russian: генерал-полковник) and full admiral (Russian: адмирал). These military ranks, along with other general and admiralty ranks, appeared in 1940. Most Warsaw Pact and Soviet-aligned countries adopted this rank. The rank is often held by commanders of the ground forces, chiefs of military academies and commanders of military districts. Colonel general is considered a stepping stone to the rank of general of the army, itself essential to achieving the high rank of marshal of the Russian Federation. This title also applies to three star officers of the air force, MVD, police and militia, internal troops, FSB/KGB, border guards and some others. In the navy, the three star rank is admiral (Russian: адмирал).[ citation needed]

From June 16, 1920, in Ukraine, a colonel general becomes a three-star general (before that rank was two-star). [4] Since 1921, the UPR ceased to exist due to the occupation of Red Army.

In 1991, Ukraine regained its independence. In the Armed Forces of Ukraine (as in other countries formed on the ruins of the USSR), the ranks and insignia were kept to the Soviet standard. Three stars on the shoulder straps have a colonel general ( Ukrainian: Генерал-полковник) and an admiral ( Ukrainian: Адмірал).

On July 5, 2016 the President of Ukraine approved “The Unicorn Project and the Distinction Marks of the Armed Forces of Ukraine”. The draft addresses, among other things, the insignia of military personnel. It was supposed to reform the list of military ranks, among others the rank of brigadier general and commodore were to appear, and the rank of lieutenant general and vice admiral were three-star ranks. [5]

On November 20, 2017, the decree of the Ministry of Defense of Ukraine № 606 was issued, which specifies the rules for wearing and using unilateral servicemen. Colonels and admirals continued to wear three stars on the shoulder straps, but the stars instead of five rays became four rays. [6] [7]