From Wikipedia
https://en.wikipedia.org/wiki/Thick-billed_raven
Species of bird

It has a very large bill that is laterally compressed and is deeply curved in profile giving the bird a very distinctive appearance. This bill, the largest of any passerine at 8–9 cm (3.1–3.5 in) in length, is black with a white tip and has deep nasal grooves with only light nasal bristle covers. [7] This raven has very short feathers on the head, throat and neck. The throat and upper breast have an oily brown gloss, while the rest of the bird is glossy black except for a distinctive white patch of feathers on the nape and onto the neck.

Its range covers Eritrea, Somalia and Ethiopia; its habitat includes mountains and high plateau between elevations of 1500 to 3400 metres. It is one of several avian species endemic to northeastern tropical Africa. [8] 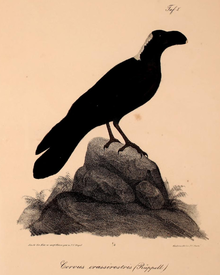 The thick-billed raven is omnivorous, feeding on grubs, beetle larvae from animal dung, carrion, scraps of meat and human food. It has been seen taking standing wheat. When seeking food from dung, it has been seen using a distinct scything movement to scatter the dung and extract the grubs.

It nests in trees and on cliffs, apparently building a stick nest like the similar and much more widely distributed and studied white-necked raven. It lays three to five eggs. In one case, thick-billed ravens were observed to vigorously displace predatory Verreaux's eagle owls from their nest area. [9]

Its calls include a harsh nasal croak, a low wheezy croak, a "raven-raven", and sometimes a "dink, dink, dink" sound. Like many corvids, the thick-billed raven is capable of vocal mimicry; however, this behavior is rare in the wild, and is normally recorded only in captivity. [3]