The Way You Make Me Feel

"The Way You Make Me Feel" is a song by American recording artist Michael Jackson. It was released by Epic Records on November 9, 1987 as the third single from his seventh studio album Bad. It was written and composed by Jackson, and produced by Quincy Jones and Jackson.

It received positive reviews from contemporary critics. "The Way You Make Me Feel" became Bad's third consecutive single to peak at number one on the Billboard Hot 100, and charted mainly within the top ten and twenty internationally. A music video for "The Way You Make Me Feel" was released at the time showing Jackson pursuing and dancing with former model Tatiana Thumbtzen.

Aside from appearing on Bad, "The Way You Make Me Feel" has also been featured on the first disc of Jackson's compilation album HIStory: Past, Present and Future, Book I in 1995, and on others like Number Ones in 2003, The Ultimate Collection in 2004, The Essential Michael Jackson in 2005, or This Is It in 2009. "The Way You Make Me Feel" has been covered by multiple recording artists.

The song has been performed on all of Jackson's world concert tours as a solo artist, and was planned to have been performed during the This Is It concerts from 2009 to 2010. Notable live performances of the song by Jackson include a performance at the 30th Grammy Awards (1988).

"The Way You Make Me Feel" was recorded by Michael Jackson in 1987 for his seventh studio album Bad, which was released the same year it was recorded. Epic Records released the song as the third single from the album in November that year. "The Way You Make Me Feel" was written and co-produced by Jackson, and produced by Quincy Jones. [2] Before the recording of Bad, Jackson had written over sixty songs for the album, with plans of releasing a three disc album, but after Jones convinced Jackson to make Bad a one disc LP, "The Way You Make Me Feel", as well as ten other songs were selected for the album. [3] According to Bad 25, the song and subsequent video was intended to show another aspect to public's perception of Michael Jackson in addition to his reputation as a lover "(I Just Can't Stop Loving You)" and being streetwise ("Bad") they wanted to show him as a flirt or able to pick up girls.

Musically, "The Way You Make Me Feel" is a pop [5] and rhythm and blues song [6] composed of blues harmonies. [7] The song's opening lyrics are "Hey, pretty baby with the high heels on". [8] "The Way You Make Me Feel"'s lyrics pertain to being in love, as well as the feeling of loving someone. Throughout the song Jackson's vocal range spans from B3 to A5. [8] The song is played in the key of E major. [8] "The Way You Make Me Feel" has a mid- tempo [9] of medium rock and has a metronome of 120 beats per minute. [8] The song follows in the chord progression of E—D/E—E—Dmaj7/E in the first line, when Jackson sings "Hee-hee! Ooh Go on!" and continues on the same progression in the second line, when Jackson sings "Girl! Aaow!". [8]

"The Way You Make Me Feel" generally charted within the top ten and top twenty positions on music charts worldwide. The song climbed to number seven on the Billboard Hot 100 on the chart's issue date of December 26, 1987. [17] After charting within the top ten for five weeks, the song peaked at number one on the Hot 100 on January 23, 1988. [18] "The Way You Make Me Feel" became the album's third consecutive single to reach number one on the Hot 100. "The Way You Make Me Feel" also charted on Billboard's Adult Contemporary chart, peaking at number nine, and on the Hot Dance Music/Maxi Single Sales chart at the peak of number three. [19] The song also charted at number one on the Billboard Hot Black Singles chart and Dance Club Play Singles chart. [19]

The song entered the United Kingdom singles charts at number sixteen on December 5, 1987. [20] The following week the song moved up thirteen spaces to number three, which was the song's peak position. [21] The song stayed at its peak position for two consecutive weeks, and remained on the country's chart for ten weeks, before falling out of the top 100 positions, only to re-enter the charts two weeks later.

Following Jackson's death, his music experienced a surge in popularity. [29] The song re-entered Dutch charts for the third time on July 4, 2009, at its peak position at number 40; the song remained on the chart for four consecutive weeks in 2009. [23] The song charted within the top ten, peaking at number six, on the Billboard Hot Digital Songs on July 11, due to digital download sales. [30] The song debuted on Swedish charts at number 30 on July 3, and peaked at number 24 the following week. [31] On July 4, the song re-entered the United Kingdom charts at number 47, and peaked at number 34 the following week. [32]

The music video for "The Way You Make Me Feel" was directed by Joe Pytka and was filmed in June 1987 at Skid Row, Los Angeles. [1] It was choreographed by Jackson and Vincent Paterson. The short version of the video is six minutes and forty-four seconds long and the full version is nine minutes and thirty-three seconds long. The video begins with a group of men trying to pick up women, but failing. One of the men, Jackson, is told to go home and not to hang around with the other guys anymore. When Jackson walks home, an elderly man (played by Joe Seneca), who is sitting on the steps of his house, tells him to just be himself. Jackson notices a woman, played by model/dancer Tatiana Thumbtzen, walking down the streets alone.

Shortly after Jackson walks out of an alley and stands in front of Thumbtzen while she's walking down the street. However, she ignores him and keeps walking which prompts the other guys to make fun of him. Jackson shouts at them which gets the attention of everyone, including Thumbtzen. Around this point, Michael performs a satanic hand symbol, reminiscent of the false god Baphomet. After walking up to her, Jackson begins singing "The Way You Make Me Feel" to her while also dancing. Uninterested, Thumbtzen walks away. He follows her, having been cheered on by his friends to 'pursue' her. Another dance routine begins, involving the man's friends, which leads to the man 'pursuing' the woman throughout the neighborhood. The video ends with the man eventually 'winning the woman over', and embracing her, while a fire hydrant sprays out water. The videoclip also features an appearance by his sister La Toya as one of Thumbtzen's friends. [1]

The music video was released on October 31, 1987, [33] and received one nomination at the 1988 MTV Video Music Awards Ceremony. [34] The video, alongside Jackson's '"Bad" video, was nominated for Best Choreography, but lost to Jackson's younger sister Janet's video " The Pleasure Principle". [34]

The introduction of the full version of the video also samples the Roy Ayers 1985 song "Hot" (written by Binky Brice, Philip Hunter Field and James Mtume) [35] from his You Might Be Surprised album. 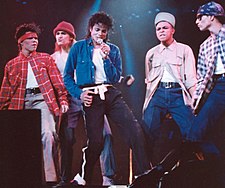 Jackson performing "The Way You Make Me Feel" in his signature outfit for the song in 1988 during the Bad World Tour. During performances of the song Jackson would do a dance routine that included four dancers in the background.

"The Way You Make Me Feel" was performed by Jackson on all three of his world concert series tours as a solo artist as well as during award shows. For a majority of the song's performances, Jackson would wear a blue dress shirt with a white T-shirt and black pants with a white belt. The song was first performed in concert by Jackson during the encore of the second leg of his Bad World Tour from 1987 to 1989. A live version of the song is available on the DVD Live at Wembley July 16, 1988.

He performed "The Way You Make Me Feel" at the 1988 Grammy Awards Ceremony, [36] during which Jackson wore his signature outfit and his signature black fedora, while doing a dance routine with four other dancers, and performed the song along with another one of his songs, " Man in the Mirror". This performance was staged and choreographed by Vincent Paterson. [36]

Tatiana Thumbtzen, who appeared in the short film for The Way You Make Me Feel, joined Jackson in some concerts of his Bad World Tour, and performed the song with him, strutting across the stage whilst he pursued her. However, she was fired from the tour by Jackson's manager after an incident during one of the performances in which she approached Jackson and kissed him onstage.

"The Way You Make Me Feel" was also performed during the first leg of Jackson's Dangerous World Tour from June 1992 to November 1993. The tour was supposed to be longer, but was canceled due to Jackson's health concerns and stress from the child sexual abuse accusations made against him. [37] [38] The next performance of the song was during select dates of Jackson's world concert series tour, HIStory. The song was performed during selected concerts from September 1996 to June 1997. The last performance of the song was at the Michael Jackson: 30th Anniversary Celebration in 2001 at Madison Square Garden on September 7 and September 10, 2001. The video footage from the performance (which included Britney Spears) was featured on CBS in November 2001, as a two-hour television special.

Since March 2009, Jackson was preparing to perform "The Way You Make Me Feel" during his This Is It concert series from 2009 to 2010. [39] Following Jackson's death in June of the same year, video footage of Jackson rehearsing the song was featured in the 2009 concert documentary film, Michael Jackson's This Is It. [40] The video rehearsal footage was also featured on the films DVD in January 2010. [41]

In 1989, German comedian Otto Waalkes parodies the music video in his film Otto – Der Außerfriesische. [42] In 2003, Australian music duo Shakaya covered "The Way You Make Me Feel" and released their version as a non-album single on 14 April 2003. [43] The song only charted on Australian charts, peaking at number 21 on the country's music charts. [44] In December 2009, Stacey Solomon, a contestant on the X Factor in the United Kingdom, performed a cover of the song during the show's semi-finals, which received mixed opinions from the show's judges. [45] [46] In January 2010, Nick Jonas performed the song during a concert at the Warner Theatre. [47] In February 2010, Whitney Houston performed "The Way You Make Me Feel", along with Jackson's " Wanna Be Startin' Somethin'", during her I Look to You Tour. [48] [49] In October 2016, Olympic gymnast Laurie Hernandez and Dancing with the Stars pro dancer Valentin Chmerkovskiy, the eventual winners of the 23rd season, performed a jazz routine dance to the song during the reality dance competition's Cirque du Soleil-themed episode. [50]