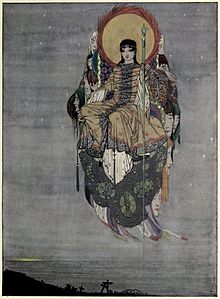 "Honour has come back, as a king, to earth," illustration by Harry Clarke in The Year's at the Spring, 1920.

The Dead is the name of two poems by Rupert Brooke, parts III and IV of his collection 1914.

Blow out, you bugles, over the rich Dead!
There's none of these so lonely and poor of old,
But, dying, has made us rarer gifts than gold.
These laid the world away; poured out the red
Sweet wine of youth; gave up the years to be
Of work and joy, and that unhoped serene,
That men call age; and those who would have been.
Their sons, they gave, their immortality.

Blow, bugles, blow! They brought us, for our dearth.
Holiness, lacked so long, and Love, and Pain.
Honour has come back, as a king, to earth,
And paid his subjects with a royal wage;
And Nobleness walks in our ways again;
And we have come into our heritage.'

These hearts were woven of human joys and cares,
Washed marvellously with sorrow, swift to mirth.
The years had given them kindness. Dawn was theirs,
And sunset, and the colours of the earth.
These had seen movement, and heard music; known
Slumber and waking; loved; gone proudly friended;
Felt the quick stir of wonder; sat alone;
Touched flowers and furs and cheeks. All this is ended.

There are waters blown by changing winds to laughter
And lit by the rich skies, all day. And after,
Frost, with a gesture, stays the waves that dance
And wandering loveliness. He leaves a white
Unbroken glory, a gathered radiance,
A width, a shining peace, under the night.

Inscription on the memorial arch at the Royal Military College of Canada.