From Wikipedia
https://en.wikipedia.org/wiki/Thames_Estuary
Estuary in which the River Thames meets the waters of the North Sea 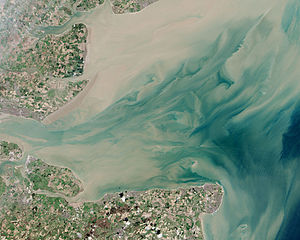 The half of the estuary that lies east of its narrow Tideway-named part, by the Operational Land Imager 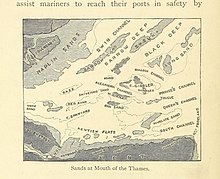 The Thames Estuary is where the River Thames meets the waters of the North Sea, in the south-east of Great Britain.

This limit of the estuary has been defined in two main ways: [1] 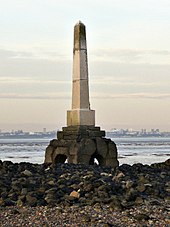 These limiting lines have three alternates: [1]

The estuary is one of the largest of 170 such inlets on the coast of Great Britain. It constitutes a major shipping route, with thousands of movements each year, including: large oil tankers, container ships, bulk carriers (of loose materials/liquids), and roll-on/roll-off (ro-ro) ferries. It is the accessway for the Port of London (including London Gateway, associated Tilbury and Purfleet) and the Medway Ports of Sheerness, Chatham and Thamesport.

The traditional Thames sailing barge worked in this area, designed to be suitable for the shallow waters in the smaller ports.

A 2000s-decade-built wind farm is 8.5 km north of Herne Bay, Kent, on a shoal south-west of Kentish Knock. It is 30 wind turbines generating typically 82.4MW of electricity.

The much larger 630 MW London Array was inaugurated in 2013.

A western cross-section of the estuary. Background runs from Tilbury (left) to Mucking Creek: looking north from Shorne, which is 4 kilometres (2.5 mi) south of the river

The term Greater Thames Estuary [4] applies to the coast and the low-lying lands bordering the estuary. These are characterised by the presence of mudflats, low-lying open beaches, and salt marshes, namely the North Kent Marshes and the Essex Marshes. Man-made embankments are backed by reclaimed wetland grazing areas, but rising sea levels may make it necessary briefly to flood some of that land at spring tides, to take the pressure off the defences and main watercourses. 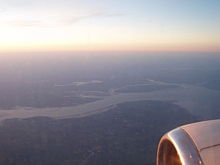 The Blackwater Estuary, on the Essex coast, in the northern part of the Greater Thames Estuary. Mersea Island is on the right.

There are many smaller estuaries in Essex, including the rivers Colne, Blackwater and Crouch. Small coastal villages depend on an economy of fishing, boat-building, and yachting. [5] The Isle of Sheppey, the Isle of Grain, Canvey Island, Two Tree Island, Havengore Island, New England Island, Rushley Island, Potton Island, Foulness Island and Mersea Island are part of the coastline. [6]

Where higher land reaches the coast, there are some larger settlements, such as Clacton-on-Sea to the north in Essex, Herne Bay, Kent, and the Southend-on-Sea area within the narrower part of the estuary.

The Thames Estuary is the focal part of the 21st-century toponym, the " Thames Gateway", designated as one of the principal development areas in Southern England.

Entrepreneurs and investors have looked at the greater estuary as a possible place for a new airport, [8] and have expanded Southend Airport in the 2010s, which has a rail link to Fenchurch Street station, London among others.

The Thames flowing through London is an archetypal, well-developed economy urban, upper river estuary with its sedimentary deposition restricted through manmade embankments and occasional dredging of parts. It is mainly a freshwater river about as far east as Battersea, insofar as the average salinity is very low and the fish fauna consists predominantly of freshwater species such as roach, dace, carp, perch, and pike. It becomes brackish between Battersea and Gravesend, and the diversity of freshwater fish is smaller, primarily roach and dace. Euryhaline species then dominate, such as flounder, European seabass, mullet, and smelt. Further east salinity increases and conditions become fully marine and the fish fauna resemble that of the adjacent North Sea, a spectrum of euryhaline and stenohaline types. An alike pattern of zones applies to the aquatic plants and invertebrates. [10] [11]

Joseph Conrad lived in Stanford-le-Hope close to the Essex marshes. His The Mirror of the Sea (1906) contains a memorable description of the area as seen from the Thames. He refers to this area in the first pages of his novel Heart of Darkness, describing it as both the launching place of England's great ships of exploration and colonization and, in ancient times, the site of colonization of the British Isles by the Roman Empire.

The form of speech of many of the people of the area, principally the accents of those from Kent and Essex, is often known as Estuary English. The term is a term for a milder variety of the "London Accent". The spread of Estuary English extends many hundreds of miles outside London, and all of the neighbouring home counties around London have residents who moved from London and brought their version of London accents with them, leading to interference with the established local accents. The term London Accent is generally avoided, as it can have many meanings. Forms of "Estuary English", as a hybrid between Received pronunciation and various London accents, can be heard in all of the New Towns, all of the coastal resorts, and in the larger cities and towns along the Thames Estuary.

For commercial shipping rounding the Nore sandbank and thus accessing Greater London, main deep-water routes were the Princes-Queens Channel and the South Channel to the south, to a lesser extent the Kings Channel and the Swin to the north. The Swin was used by barges and leisure craft from the Essex rivers, and coasters and colliers from the north east. These channels were made up of natural troughs; Yantlet Channel (Sea Reach), Oaze Deep, Knock John Channel, Black Deep/ Black Deep Channel which have been much-marked. These are separated by slow-moving sandbanks with names such as the East and West Barrows, the Nob, the Knock, Kentish Knock, the John, the Sunk, the Girdler, and Long Sand/the Long Sands. [12]

Shallow-bottomed barges and coasters would navigate the swatchways at flood tide, and would cross the sand banks at spitways, points where the water was least shallow, and just deep enough at that point of the tide. If they missed the moment they would heave to (lay anchor) and wait for the next tide.

Recreational craft are expected use channels most suited to the size of their vessel. Their main guide says to use when navigating to or from:

To cross the south-east quarter of the estuary large vessels use Fisherman's Gat, and small vessels to were expected to use Foulger's Gat. [13]

This table shows, from west to east, the principal navigation lights, buoys and other marks to the north (port) and south (starboard) of the main deep-water channels of the River Thames from Gallions Reach to the Sunk Light Float. [14] [15] [16] [17] [18] The Thames is in IALA region A so port buoys are red and starboard buoys are green.