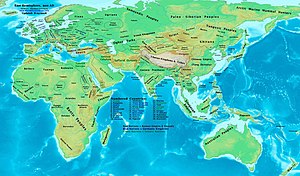 Eastern Hemisphere at the beginning of the 10th century

The 10th century was the period from 901 ( CMI) through 1000 ( M) in accordance with the Julian calendar, and the last century of the 1st millennium.

In China the Song dynasty was established. The Muslim World experienced a cultural zenith, especially in al-Andalus under the Caliphate of Córdoba and in Samanid Empire under Ismail Samani. Additionally, there was cultural flourishing for the Byzantine Empire and the First Bulgarian Empire.

The Medievalist and historian of technology Lynn White said that "to the modern eye, it is very nearly the darkest of the Dark Ages", but concluded that ". . . if it was dark, it was the darkness of the womb." [1] Similarly, Helen Waddell wrote that the 10th century was that which "in the textbooks disputes with the seventh the bad eminence, the nadir of the human intellect." [2] In the 15th century, Lorenzo Valla described it as the Century of Lead and Iron and later Cardinal Baronius as the Leaden Century or Iron Century. 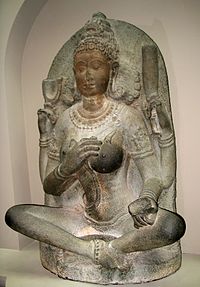 This statue of a yogini goddess was created in Kaveripakkam in Tamil Nadu, India, during the 10th century. 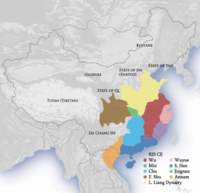 The Bulgarian victory at Anchialos. 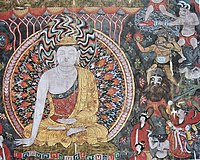 Earliest known representation of a gun (a fire lance) and a grenade (upper right), from the cave murals of Dunhuang, China, 10th century.