From Wikipedia
https://en.wikipedia.org/wiki/Temperate_Northern_Pacific
Biogeographic region of the Earth's seas, comprising the temperate waters of the northern Pacific Ocean 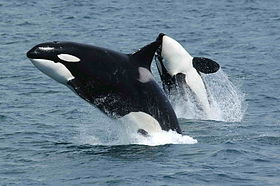 A pair of orcas breaching off the southern coast of Unimak Island, Alaska

The Temperate Northern Pacific connects, via the Bering Sea, to the Arctic marine realm, which includes the polar waters of the Arctic Sea. To the south, it transitions to the tropical marine realms of the Pacific, including the Tropical Eastern Pacific along the Pacific coast of the Americas, the Eastern Indo-Pacific in the central Pacific Ocean, and the Central Indo-Pacific of the western Pacific basin. The Taiwan Strait forms the boundary between the Temperate Northern Pacific and the Central Indo-Pacific.