From Wikipedia
https://en.wikipedia.org/wiki/Technosignature
Property that provides scientific evidence for the presence of technology

Technosignature or technomarker is any measurable property or effect that provides scientific evidence of past or present technology. [1] [2] Technosignatures are analogous to biosignatures which signal the presence of life, whether intelligent or not. [1] [3] Some authors prefer to exclude radio transmissions from the definition, [4] but such restrictive usage is not widespread. Jill Tarter has proposed that the search for extraterrestrial intelligence (SETI) be renamed "the search for technosignatures". [1] Various types of technosignatures, such as radiation leakage from megascale astroengineering installations such as Dyson spheres, the light from an extraterrestrial ecumenopolis, or Shkadov thrusters with the power to alter the orbits of stars around the Galactic Center, may be detectable with hypertelescopes. Some examples of technosignatures are described in Paul Davies's 2010 book The Eerie Silence, although the terms "technosignature" and "technomarker" do not appear in the book.

A Dyson sphere, one of the best known potential technology that may cause a technosignature observable early

A Dyson sphere, constructed by life forms dwelling in proximity to a Sun-like star, would cause an increase in the amount of infrared radiation in the star system's emitted spectrum. Hence, Freeman Dyson selected the title "Search for Artificial Stellar Sources of Infrared Radiation" for his 1960 paper on the subject. [5] SETI has adopted these assumptions in its search, looking for such "infrared heavy" spectra from solar analogs. From 2005, Fermilab has conducted an ongoing survey for such spectra, analyzing data from the Infrared Astronomical Satellite. [6] [7]

Identifying one of the many infra-red sources as a Dyson sphere would require improved techniques for discriminating between a Dyson sphere and natural sources. [8] Fermilab discovered 17 "ambiguous" candidates, of which four have been named "amusing but still questionable". [9] Other searches also resulted in several candidates, which remain unconfirmed. [6] In October 2012, astronomer Geoff Marcy, one of the pioneers of the search for extrasolar planets, was given a research grant to search data from the Kepler telescope, with the aim of detecting possible signs of Dyson spheres. [10]

Shkadov thrusters, with the hypothetical ability to change the orbital paths of stars in order to avoid various dangers to life such as cold molecular clouds or cometary impacts, would also be detectable in a similar fashion to the transiting extrasolar planets searched by Kepler. Unlike planets, though, the thrusters would appear to abruptly stop over the surface of a star rather than crossing it completely, revealing their technological origin. [11] In addition, evidence of targeted extrasolar asteroid mining may also reveal extraterrestrial intelligence (ETI). [12]

Lights from cities and infrastructure on Earth at night from space

Various astronomers, including Avi Loeb of the Harvard-Smithsonian Center for Astrophysics and Edwin L. Turner of Princeton University have proposed that artificial light from extraterrestrial planets, such as that originating from cities, industries, and transport networks, could be detected and signal the presence of an advanced civilization. Such approaches, though, make the assumption that the radiant energy generated by civilization would be relatively clustered and can therefore be detected easily. [13] [14]

Light and heat detected from planets must be distinguished from natural sources to conclusively prove the existence of intelligent life on a planet. [4] For example, NASA's 2012 Black Marble experiment showed that significant stable light and heat sources on Earth, such as chronic wildfires in arid Western Australia, originate from uninhabited areas and are naturally occurring. [15] 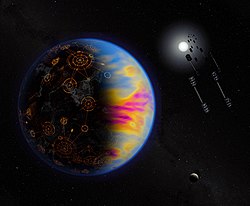 Artist's illustration of an advanced ET civilization with industrial pollution [16]

Atmospheric analysis of planetary atmospheres, as is already done on various Solar System bodies and in a rudimentary fashion on several hot Jupiter extrasolar planets, may reveal the presence of chemicals produced by technological civilizations. [17] For example, atmospheric emissions from human technology use on Earth, including nitrogen dioxide and chlorofluorocarbons, are detectable from space. [18] Artificial air pollution may therefore be detectable on extrasolar planets and on Earth via "atmospheric SETI" – including NO2 pollution levels and with telescopic technology close to today. [19] [20] [21]

However, there remains a possibility of mis-detection; for example, the atmosphere of Titan has detectable signatures of complex chemicals that are similar to what on Earth are industrial pollutants, though not the byproduct of civilisation. [22] Some SETI scientists have proposed searching for artificial atmospheres created by planetary engineering to produce habitable environments for colonisation by an ETI. [17] 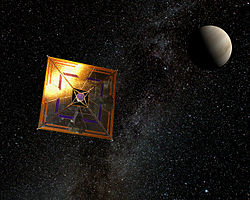 Interstellar spacecraft may be detectable from hundreds to thousands of light-years away through various forms of radiation, such as the photons emitted by an antimatter rocket or cyclotron radiation from the interaction of a magnetic sail with the interstellar medium. Such a signal would be easily distinguishable from a natural signal and could hence firmly establish the existence of extraterrestrial life, were it to be detected. [23] In addition, smaller Bracewell probes within the Solar System itself may also be detectable by means of optical or radio searches. [24] [25] Unless mechanisms of repulse or dissolution and/or data-manipulation and/or cloaking technologies are sufficiently employed to prevent this,[ additional citation(s) needed] self-replicating spacecraft or their communications networks could potentially be detectable within our Solar system or in nearby star-based systems, [26] if they are located there. [27] Such technologies or their footprints could be in Earth's orbit, on the Moon or on the Earth. In March 2021, news media announced the public release, for the first time, of a comprehensive report of UFO events accumulated by United States agencies. [28]

A less advanced technology, and one closer to humanity's current technological level, is the Clarke Exobelt proposed by Astrophysicist Hector Socas-Navarro of the Instituto de Astrofisica de Canarias. [29] This hypothetical belt would be formed by all the artificial satellites occupying geostationary/ geosynchronous orbits around an exoplanet. Simulations suggest that a very dense satellite belt (requiring only a moderately more-advanced civilization than ours) would be detectable with existing technology in the light curves from transiting exoplanets. [30]

Major technosignatures as outlined in a 2021 scientific review. [31]

One of the first attempts to search for Dyson Spheres was made by Vyacheslav Slysh from the Russian Space Research Institute in Moscow in 1985 using data from the Infrared Astronomical Satellite (IRAS). [32]

Another search for technosignatures, circa 2001, involved an analysis of data from the Compton Gamma Ray Observatory for traces of anti-matter, which, besides one "intriguing spectrum probably not related to SETI", came up empty. [33]

In 2005, Fermilab had an ongoing survey for such spectra by analyzing data from IRAS. [34] [35] Identifying one of the many infra-red sources as a Dyson Sphere would require improved techniques for discriminating between a Dyson Sphere and natural sources. [36] Fermilab discovered 17 potential "ambiguous" candidates of which four have been named "amusing but still questionable". [9] Other searches also resulted in several candidates, which are, however, unconfirmed. [37]

In a 2005 paper, Luc Arnold proposed a means of detecting planetary-sized artifacts from their distinctive transit light curve signature. He showed that such technosignature was within the reach of space missions aimed at detecting exoplanets by the transit method, as were Corot or Kepler projects at that time. [38] The principle of the detection remains applicable for the future exoplanets missions. [39] [40] [41]

In 2012, a trio of astronomers led by Jason Wright started a two-year search for Dyson Spheres, aided by grants from the Templeton Foundation. [42]

In 2013, Geoff Marcy received funding to use data from the Kepler Telescope to search for Dyson Spheres and interstellar communication using lasers, [43] and Lucianne Walkowicz received funding to detect artificial signatures in stellar photometry. [1]

Starting in 2016, astronomer Jean-Luc Margot of UCLA has been searching for technosignatures with large radio telescopes. [2]

In 2016, it was proposed that vanishing stars are a plausible technosignature. [44] A pilot project searching for vanishing stars was carried out, finding one candidate object. In 2019, the Vanishing & Appearing Sources during a Century of Observations (VASCO) project began more general searches for vanishing and appearing stars, and other astrophysical transients [45] They identified 100 red transients of "most likely natural origin", while analyzing 15% of the image data. In 2020, the VASCO collaboration started up a citizen science project, vetting through images of many thousands of candidate objects. [46] The citizen science project is carried out in close collaboration with schools and amateur associations mainly in African countries. [47] The VASCO project has been referred to as "Perhaps the most general artefact search to date". [48] In 2021, VASCO's principal investigator Beatriz Villarroel received a L'Oreal-Unesco prize in Sweden for the project. [49] In June 2021, the collaboration published the discovery of nine simultaneous transients. [50] No natural phenomena can explain the presence of the objects in an old photographic plate from 1950. The group indicated that either nuclear fallout from unlisted atomic bombs contaminated the plates, or that the high spatial density of transients is caused by the presence of artificial, reflective objects at high orbits around Earth in 1950. 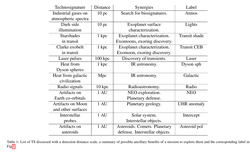 Methods and ancillary benefits of the search for various technosignatures. [31]

In June 2020, NASA was awarded their first SETI-specific grant in three decades. The grant funds the first NASA-funded search for technosignatures from advanced extraterrestrial civilizations other than radio waves, including the creation and population of an online technosignature library. [51] [52] [53] A 2021 scientific review produced by the i.a. NASA-sponsored online workshop TechnoClimes 2020 classified possible optimal mission concepts for the search of technosignatures. It evaluates signatures based on a metric about the distance of humanity to the capacity of developing the signature's required technology – a comparison to contemporary human technology footprints, associated methods of detection and ancillary benefits of their search for other astronomy. The study's conclusions include a robust rationale for organizing missions for searching artifacts – including probes – within the Solar system. [54] [31]

Steven J. Dick states that there are no principles for dealing with successful SETI detections. Detections of technosignatures may have ethical implications, such as conveying information related to astroethical [55] and related machine ethics ones, which may vary depending on the type, prevalence and form of the detected signature's technology. Moreover, various types of information about detected technosignatures and their distribution may have varying implications that may also depend on time and context.