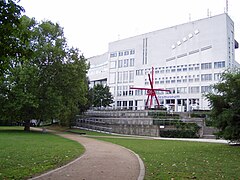 The Technoseum (former name State Museum of Technology and Work, German: Landesmuseum für Technik und Arbeit) is a technology museum in Mannheim, Baden-Württemberg, Germany, with displays covering the industrialisation of the south-western regions of the country.

The museum building was designed by the Berlin architect Ingeborg Kühler. [1] Its planning and construction period lasted from 1982 to 1990.

Visitors who walk through the building from top to bottom will experience a journey in time from the beginning of the industrial revolution in the state of Baden-Württemberg to the present day.

Stands portraying the technical, social and political changes since the 18th century include those on clocks, paper manufacture and weaving. There are displays of living and working premises as well as machinery from the fields of industry, transport and the office. These displays enable the visitor to gain a graphic understanding of the far-reaching changes in living and working conditions right up to the present.

The Elementa workshop complements the themes and exhibits of technological, economic and social history shown to date. It is not limited to covering basic scientific principles, but also shows the technical inventions which resulted from various scientific experiments.

Running from end-to-end through the middle of the museum is a dual-gauge metre gauge and standard gauge railway track. On this track a fireless locomotive operates steam-haul trips outside of the museum, over a bridge and then back into the museum again.

Since 2006, between May and October each year a Feldbahn narrow gauge trains runs in a 1.3-kilometre-long (0.8 mi) loop around the Technoseum park grounds. The track gauge is 600 millimetres (2 ft) and there are two regular small diesel locomotives. One locomotive was built in 1961 and worked mining peat in Schleswig-Holstein; the other one was built in 1964 and matches a locomotive used at the nearby Tonwaren-Industrie Wiesloch brickworks. [4]

The selection of visiting or temporary exhibitions have included: