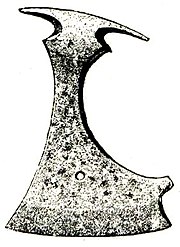 Axe made of iron, dating from Swedish Iron Age, found at Gotland, Sweden: the iron—as a new material—initiated a dramatic revolution in technology, economy, society, warfare and politics.

A technological revolution is a period in which one or more technologies is replaced by another, novel technology in a short amount of time. It is an era of accelerated technological progress characterized by new innovations whose rapid application and diffusion typically cause an abrupt change in society. 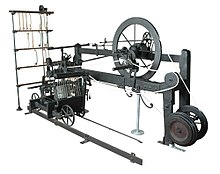 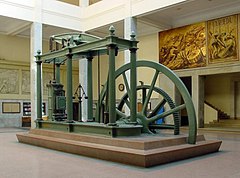 A Watt steam engine—the steam engine, fuelled primarily by coal, propelled the Industrial Revolution in Great Britain and the world.

IBM Personal Computer XT in 1988—the PC was an invention that dramatically changed not only professional life, but personal life as well.

A technological revolution generally increases productivity and efficiency. It may involve material or ideological changes caused by the introduction of a device or system. Some examples of its potential impact are business management, education, social interactions, finance and research methodology; it is not limited strictly to technical aspects. The technological revolution rewrites the material conditions of human existence and can reshape culture. It can play a role as a trigger of a chain of various and unpredictable changes: [1]

What distinguishes a technological revolution from a random collection of technology systems and justifies conceptualizing it as a revolution are two basic features:

1. The strong interconnectedness and interdependence of the participating systems in their technologies and markets.

2. The capacity to transform profoundly the rest of the economy (and eventually society). [2]

The concept of universal technological revolutions is a key factor in the Neo-Schumpeterian theory of long economic waves/cycles [4] ( Carlota Perez, Tessaleno Devezas, Daniel Šmihula and others).

We can identify several universal technological revolutions which occurred during the modern era in Western culture: [5]

Each revolution comprises the following engines for growth:

Every revolution utilizes something that is cheap. For instance, the Industrial Revolution had cheap coal for iron steam engines which led to production of Iron railways. The same applied in the technological revolution where there was cheap microelectronics for computers which thus progressed the internet. A combination of low-cost input and new infrastructures are at the core of each revolution to achieve their all pervasive impact. [8]

The Second Machine Age is the term adopted in a 2014 book by Erik Brynjolfsson and Andrew McAfee. The industrial development plan of Germany began promoting the term Industry 4.0. In 2019, at the World Economic Forum meeting in Davos, Japan promoted another round of advancements called Society 5.0. [10] [11]

The phrase Fourth Industrial Revolution was first introduced by Klaus Schwab, the executive chairman of the World Economic Forum, in a 2015 article in Foreign Affairs, [12] "Mastering the Fourth Industrial Revolution" was the theme of the World Economic Forum Annual Meeting 2016 in Davos-Klosters, Switzerland. On October 10, 2016, the Forum announced the opening of its Centre for the Fourth Industrial Revolution in San Francisco. [13] This was also subject and title of Schwab's 2016 book. [14] Schwab includes in this fourth era technologies that combine hardware, software, and biology ( cyber-physical systems), [15] and emphasizes advances in communication and connectivity. Schwab expects this era to be marked by breakthroughs in emerging technologies in fields such as robotics, artificial intelligence, nanotechnology, quantum computing, biotechnology, the internet of things, the industrial internet of things (IIoT), decentralized consensus, fifth-generation wireless technologies (5G), 3D printing and fully autonomous vehicles. [16]

List of intellectual, philosophical and technological revolutions (sectoral or universal) 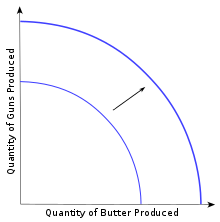