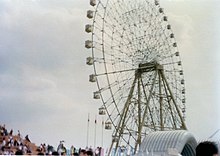 Technocosmos, later renamed Technostar, was an 85-metre (279 ft) tall giant Ferris wheel that was built for the Expo '85 World Fair in Tsukuba, Ibaraki, Japan. It carried almost 3 million passengers during the exposition. [1]

Technocosmos had an overall height of 85 metres (279 ft), [2] a diameter of 82.5 metres (271 ft), and took 15 minutes to complete a revolution. Each of the 48 passenger cars could carry 8 people and was equipped with solar panels to power its air conditioning. [1]

After Expo '85, Technocosmos was relocated[ when?] to the Expoland amusement park in Suita, Osaka Prefecture, and renamed Technostar. [3]

Expoland has since permanently closed.[ when?][ citation needed] Work began on dismantling Technostar in November 2009, and it had been removed from the Osaka site by the end of the following month.[ citation needed]