Tau Ceti is a star that hosts a planetary system and a common locale in much science fiction. It is the second closest spectral class G star to the Sun (after Alpha Centauri A), making it a popular story setting or system of origin in science fiction tales. The Sun, itself of spectral class G, provides an obvious model for the possibility that the star might harbor worlds capable of supporting life. But Tau Ceti, weighing in at ~0.78 M☉, is metal-poor [1] and so is thought to be unlikely to host rocky planets (see Destination: Void by Frank Herbert below); on the other hand, observations have detected more than ten times as much dust around the star than exists in the Solar System, [2] a condition tending to enhance the probability of such bodies. Since the star's luminosity is barely 55% that of the Sun, those planets would need to circle it at the orbital radius of Venus in order to match the insolation received by the Earth. [3] (See Time for the Stars by Robert Heinlein below.)

Tau (Ταῦ, /Taf/ (Τ)) is the 19th letter of the Greek alphabet. The name Cetus is also Greek (Κῆτος, Kētos) as well as Arabic (القيتوس, al Ḳaitoos) and translates variously as a large fish, a whale, a shark, or a sea monster. [4] In Greek mythology, the cetacean constellation, although not the star itself, represents the monster slain by Perseus in his rescue of the beautiful princess Andromeda.

Many stars may be referred to in fictional works for their metaphorical or mythological associations, or else as bright points of light in the sky of Earth, but not as locations in space or the centers of planetary systems.

The constellation Cetus lies close to the celestial equator and intersects the plane of the ecliptic, which allows it to be seen from most of the Earth's surface. However, because of its unprepossessing appearance in the sky, and its want of a "good" traditional name to supplement its esoteric Bayer designation, Tau Ceti has rarely if ever been used in a general sense, either in traditional mythologies or in the arts and literature that draw sustenance from them.

The star's popularity as a subject of science fiction stems not from its general cultural resonance, but from its astronomical data: 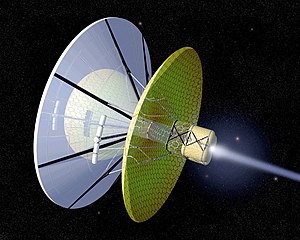 Artist's conception of a Bussard ramjet. One key component of the ramjet—a miles-wide electromagnetic field that scoops up interstellar hydrogen for fuel—is invisible. 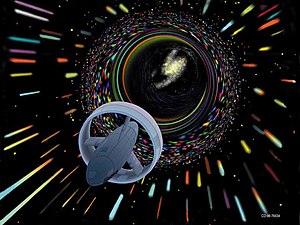 Wormhole travel as envisioned by Les Bossinas for NASA.

Artist's depiction of a pair of O'Neill cylinders forming a habitat in space.

The items in this subsection all refer to works in the film, television, and print franchise originated by Gene Roddenberry.

Other film and television 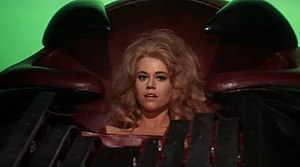 Most of the items in this section are manga or light novels by Japanese authors.

Artist's conception of the first Magellan probe orbiting the planet Venus, with the Sun in the background (1990). Given Tau Ceti's spectral similarity to our own star, the picture serves equally well as a likeness of a fictional Magellan probe exploring New Earth. 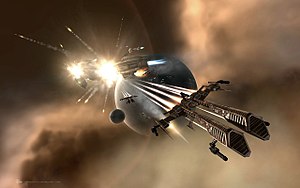 Artist's rendering: Rifter-class frigates after a successful attack against an Armageddon-class battleship in an inter-factional war in the New Eden galaxy, the setting for the EVE Online MMORPG.