From Wikipedia
https://en.wikipedia.org/wiki/Tanimbar_corella
Species of bird

The Tanimbar corella (Cacatua goffiniana) also known as Goffin's cockatoo or the blushing cockatoo, is a species of cockatoo endemic to forests of Yamdena, Larat and Selaru, all islands in the Tanimbar Islands archipelago in Indonesia. [3] [4] [5] It has been introduced to the Kai Islands, Indonesia, [5] Puerto Rico and Singapore. [1] This species was only formally described in 2004, [2] after it was discovered that the previous formal descriptions pertained to individuals of a different cockatoo species, the Ducorps' or Solomons cockatoo (Cacatua ducorpsii). [6] Tanimbar corellas are the smallest of the white cockatoos. It is classified as Near Threatened due to deforestation and bird trade. It breeds well in captivity and there is a large avicultural population.

Like all members of the family Cacatuidae, the Tanimbar corella is crested, meaning it has a collection of feathers on its head that it can raise or lower. Its body is mainly covered with white feathers, with salmon or pink colored feathers between the beak and eyes. The deeper (proximal) parts of the crest feathers and neck feathers are also a salmon color, but the coloration here is hidden by the white color of the more superficial (distal) areas of these feathers. The underside of its wing and tail feathers exhibit a yellowish tinge. The beak is pale grey and eye colour ranges from brown to black. Both sexes are similar. They are often confused with the little corella (bare-eyed cockatoo) due to their similar appearance.

The maximum recorded lifespan for a (captive) Tanimbar corella is 28 years and she is still alive today – though this figure may be a significant under-representation, considering the long-lived nature of many other cockatoo species. [7] [8]

Not much is known about the breeding behaviour of this species in the wild. Their breeding season is unknown and little is known of their mating behaviors. 2-3 eggs are laid per clutch. [9] 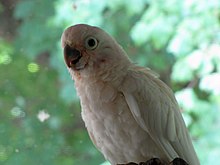 Due to ongoing habitat loss on Tanimbar, limited range and illegal hunting, the Tanimbar corella is evaluated as Near Threatened on the IUCN Red List of Threatened Species. [1] It is listed on Appendix I of CITES. [10] [11] In the 1970s, Japanese loggers ravaged the islands. Many of the dazed, disoriented birds were captured for the pet trade. Although many died from stress during shipment, there may be a small silver lining behind this ecological disaster, because many Tanimbar corellas have reproduced in captive breeding programs. As such, there are now more Tanimbar corellas in captivity than in the wild.[ citation needed]

Historically, the discovery of the species as Lophochroa goffini is attributed to Otto Finsch in 1863. [12] It was named for Andreas Leopold Goffin, a friend of Finsch and apparently a Dutch naval lieutenant who died the same year at the age of 26. [2] [13]

In 2000, it became clear that Finsch's formal description of this species was based on two specimens that actually belonged to an entirely different cockatoo species, the Ducorps' or Solomons cockatoo (Cacatua ducorpsii). [6] Cacatua goffini thus became a synonym for Cacatua ducorpsii, leaving this species without a proper scientific name and description. In 2004, the species was formally described as Cacatua goffiniana, maintaining the intent of Finsch to name a species of cockatoo after his friend. The new description is based on an individual collected from the Tanimbar Islands in 1923 by Dr. Felix Kopstein. [2]

Pet flying in a harness

In aviculture the parrot is widely known as the Goffin's cockatoo. Pet birds handreared from hatching can imitate human speech, but generally they are not good talkers. [14] They are generally quieter than the "large cockatoos" but can still be quite loud, and they have a sharp screech that some find irritating. They can make good pets, as they are friendly and sociable when properly socialized. Like most cockatoos, they enjoy being handled and stroked. They are intelligent and they can be trained and can learn tricks.

Tanimbar corellas learn by watching and copying. Just by opening the cage door, a Tanimbar corella's attention can be drawn to the latch on its cage and it can learn by trial and error how to open the latch with its beak and escape the cage in seconds. [14] Tanimbar corellas can destroy furniture with their beaks and can chew through wires and cause potentially dangerous electrical incidents.

Handreared Tanimbar corellas tend to demand a lot of attention. Occasionally, captive birds of this species (like many cockatoos) develop self-destructive behaviours such as feather-plucking, or stereotypy if they do not have an interesting and enriching environment. Caged Tanimbar corellas require a frequent change of toys to play with so they do not become bored. They need time out of their cage for one-on-one social contact of at least four hours daily and also to exercise their wings and fly. Even very tame birds can bite humans when irritated or even when being excessively playful. Their droppings are semi-solid and can be messy. Many new bird owners are not aware of the time and money a cockatoo demands and pet birds are often passed from one owner to the next or relinquished to animal shelters.

In the UK their sale is controlled as they are classified as a rare species. Each bird must have an official certificate to prove that it was captive-bred and not imported.[ citation needed]

Tool use behaviour has been observed in the Tanimbar corella in captivity. It was reported in November 2012 by Professor Alice Aursperg of the University of Vienna, that a cock bird named Figaro was observed spontaneously shaping splinters of wood and small sticks in order to create rakes that were then utilized to extend his reach and retrieve otherwise unavailable food items located upon the other side of his aviary mesh. [15] [16]

In July 2013, the results of a joint study involving scientists from University of Oxford, the University of Vienna and the Max Planck Institute, again involving the Tanimbar corellas of the Vienna Goffin Lab, were announced. It was discovered that the birds possessed the ability to solve complex mechanical problems, in one case spontaneously working out how to open a five-part locking mechanism in sequence to retrieve a food item. The corellas were able to very quickly adapt their behaviour and again open the lock when the mechanism sections were modified or re-ordered, demonstrating an apparent concept of working towards a particular goal and knowledge of the way in which physical objects act upon each other – rather than merely an ability to repeat a learned sequence of actions. [17]

A later experiment also conducted at the Vienna Goffin Lab by Prof. Auersperg and her team broadly adapted the Stanford marshmallow experiment for the Tanimbar corella, to investigate whether the birds were capable of self-control and of anticipating a delayed gain. The corellas were given the opportunity to exchange a favoured food item (in this case a pecan nut) for an even more desirable nut (a cashew), if they were only able to hold the first nut for a period of time and then return it to the human researcher's hand uneaten – at which point the nuts would be exchanged. Although pecan nuts are normally consumed instantly, it was discovered that the corellas could resist the temptation to eat the nut for periods of time for up to 80 seconds once aware that a cashew was also on offer. This behaviour (having also previously been demonstrated in corvids) further disproves the previous belief that birds are incapable of self-control. [18] Further work by Auersperg's team, published in November 2018, showed that the corellas would cut cardboard to length with their beak, to obtain a reward, but seemed unable to change the width of the tools, perhaps due to the physical limitations of their beaks. [19]

Further research in 2020 by Auersperg's team compared the problem-solving ability of the captive-bred Goffins at the Goffin Lab with wild birds caught in Tanimbar and exposed to the same experimental conditions - in which the birds were placed in an "innovation arena" and presented a series of 20 different tasks (e.g. pressing a button, turning a wheel, pulling out a drawer, removing a twig, overturning a cup, opening a clip, etc.) which they could choose to partake in, in order to obtain a food reward. It was found that while the wild Goffins were less inclined to interact with the test apparatus, those that did solved the presented tasks at a similar rate to the captive-bred birds. [20]

Wild Goffins were also observed shaping sticks of different dimensions in order to create a series of tools which enabled them to eat sea mango seeds. [21]