From Wikipedia
(Redirected from Tacna Region)
https://en.wikipedia.org/wiki/Tacna_Region
Departments of Peru
Region in 4 provinces and 26 districts, Peru

Tacna (Spanish pronunciation:  [ˈtakna]; Aymara & Quechua: Taqna) is the southernmost department and region in Peru. The Chilean Army occupied the present-day Tacna Department during the War of the Pacific from 1885 to 1929 when it was reincorporated into Peruvian soil.

The region is located below the Titicaca plateau and has a diverse geography, including volcanoes, deserts, and mountainous zones, from which arise rivers that go over the punas and the plateaus, thus forming the hydrographical system of this zone. The region is small in size but has a significant mining and agriculture potential. It has various climates and diverse production.

This area has a large amount of sunshine year round due to its stable descending air and high pressure. According to the Köppen Climate Classification system, Tacna has a desert climate, abbreviated "Bwh" on climate maps. [1] 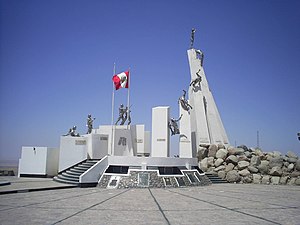 Monument to the Battle of Tacna in the Alto de la Alianza, Cerro Intiorko in Tacna. 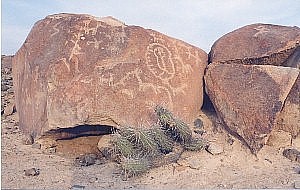 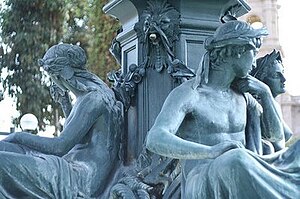 There is evidence of the presence of a very early culture that goes back more than 10 000 years. The archaeological investigations in the region have proved that a civilization dwelled in this zone in the Stone Age. The Toquepala Caves (7630 BC) and Abrigo de Caru (6240 BC) belong to this age. There are other sites such as Girata Complex, Mullini, and Queñavichinca, where investigations have not been concluded.

The first groups of Spanish conquerors arrived in the region in 1535. These groups were formed by members of the Almagro expedition, organized to conquer Chile. During this time, the city of Tacna was called Villa San Pedro de Tacna. In 1615 and 1784 Tacna experienced violent earthquakes, and many towns were reduced to ruins. However, they were rebuilt by their people who decided to stay in the same place.

Tacna has a seat of honor in the emancipation process. Since 1810, the local patriots, following the example of their Argentine neighbors, who had already declared their independence, started to conspire. In 1811, Francisco Antonio De Zela sent forth the first libertarian outcry in Tacna. Once the Peruvian independence was consummated, the heroism of this city was honored by promoting it to the rank of villa in 1823. On 26 May 1828, President José de La Mar promulgated a law given by Congress by which the city of Tacna was given the title of Ciudad Heroica (Heroic City).

The administrative divisions before the war against Chile were as follows:

During the War of the Pacific against Chile, the tacneños placed themselves in the front line, offering their lives defending the nation.

Main articles: War of the Pacific, Tacna Province (Chile), Treaty of Ancón, and Treaty of Lima (1929)

On 26 May 1880, after the Battle of Alto de la Alianza, the Chilean army occupied the Tacna province. Under the terms of the treaty, Chile was to occupy the provinces of Tacna and Arica for ten years, after which a plebiscite was to be held to determine the region's sovereignty. Tacna remained under Chilean control for 50 years, during which Chilean groups and authorities lead a campaign of Chilenization in an attempt to persuade the local population to abandon their Peruvian past and accept Chilean nationality.

However, Peruvian nationalists ensured that the Chilean propaganda failed and the planned plebiscite was never held. Finally, in 1929, the Treaty of Lima was signed in which Chile kept Arica, while Peru reacquired Tacna and receiving $6 million indemnity and other concessions.

Some of the important persons that lived in Tacna during the Chilean administration was Salvador Allende and his family; they lived eight years in the city. Salvador lived in Tacna since he was a baby, he arrived in 1908 and studied in the Tacna School (Liceo de Tacna).

On 26 January 2007, Peru’s government issued a protest against Chile’s demarcation of the coastal frontier the two countries share. Peruvian President Alan García recalled his ambassador to Chile, Hugo Otero, to Lima to consult about the controversy over the maritime boundary the two countries share. According to the Peruvian Foreign Ministry, the Chilean legislatures endorsed a plan regarding the Arica and Parinacota region which does not comply with the current, established demarcation of the border. Moreover, they allege that the proposed Chilean law includes an assertion of sovereignty over 19,000 square meters of land in Peru's Department of Tacna.

According to the Peruvian Foreign Ministry, Chile had defined a new region "without respecting the Concordia demarcation." The Peruvian government maintained that the dispute over the Chilean plan is part of an ongoing maritime dispute whereby Chile has tried to use the demarcation process to extend its maritime frontier. Over the past 50 years, Peru has maintained claims over roughly 40,000 square kilometers of ocean territory. The Chilean government has asserted that the region in dispute is not a coastal site named Concordia, but instead refers to boundary stone No. 1, which is located to the northeast and 200 meters inland. [2]

Given that the proposed Chilean law does not recognize the borderline established by both nations in the 1929 agreement, Peru lodged diplomatic protests with Chile. In the complex territorial dispute, Chile is asserting the border near the Pacific Ocean to fit in the geographical parallel, which Lima asserts will cut off at least 19,000 squares meters of the Peruvian territory. [3]

A possible border dispute was averted when the Chilean Constitutional Court ruled on 26 January 2007, unconstitutional legislation. Peru said, "could be seen as a move by Chile to encroach on its maritime territorial sovereignty." While agreeing with the court's ruling, the Chilean government reiterated its stance that the maritime borders between the two nations were not in question and have been formally by the international community. [4]

Peruvian Foreign Minister Jose Garcia has expressed that his country may turn to the international court at The Hague but has said that the necessary documents for that action are not ready. [5]

The maritime boundary between Chile and Peru as defined by the International Court of Justice on 27 January 2014.

On 27 January 2014, in the final ruling of the International Court of Justice located in The Hague, Peru gained some maritime territory. The maritime boundary extends only to 80 nautical miles (150 km) off of the coast. From that point, the new border runs in a southwesterly direction to a point that is 200 nmi (370 km) equidistant from the coast of the two countries.

The Court concludes that the maritime boundary between the Parties starts at the intersection of the parallel of latitude passing through Boundary Marker No. 1 with the low-water line, and extends for 80 nmi (150 km) along that parallel of latitude to Point A. From this point, the maritime boundary runs along the equidistance line to Point B, and then along the 200 nmi (370 km) limit measured from the Chilean baselines to Point C. In view of the circumstances of the case, the Court has defined the course of the maritime boundary between the Parties without determining the precise geographical co-ordinates. [7] [8]

Map of the Tacna region showing its provinces

The Tacna Region is divided into four provinces ( Spanish: provincias, singular: provincia), which are composed of 26 districts (distritos, singular: distrito).

The provinces, with their capitals in parenthesis, are:

Tacna's primary income earner is copper mining. Agriculturally, Tacna produces 53.15% of the whole olive crop in Peru. It also produces maize, potatoes, wheat, cotton, oregano, alfalfa, and grapevine (for the production of wine and pisco). It also has a sizable herd of dairy cattle and lamb.

In addition to mining and agriculture, fishing is also important, as Tacna's sea is abundant in fish resources.

To drink, Tacna has macerated Brussels apricot, frutilla or tumbo, and wines produced in the local vineyards.

Carnivals. They are celebrated in different towns and villages with typical local dances that can go on for entire days and nights.