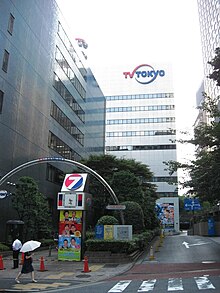 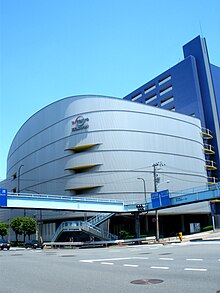 JOTX-DTV, virtual channel 7 (UHF digital channel 23), branded as TV Tokyo [a] and often abbreviated as "Teleto", [b] a blend of " terebi" and "Tokyo", is the flagship station of the TXN Network headquartered in the Sumitomo Fudosan Roppongi Grand Tower in Roppongi, Minato, Tokyo, Japan, owned-and-operated by the TV Tokyo Corporation [c] subsidiary of listed certified broadcasting holding company TV Tokyo Holdings Corporation, [d] itself a subsidiary of Nikkei, Inc. [1] It is one of the major Tokyo television stations, particularly specializing in anime.

TV Tokyo was established by the Japan Science Foundation in 1951 and started broadcasting, as Science TV Tokyo Channel 12 Television (科学テレビ東京12チャンネルテレビ, Kagaku Terebi Tōkyō Jūni-channeru Terebi) on April 12, 1964. It took its name from its VHF frequency channel 12. It almost went bankrupt in 1968; on 1 July that year, a limited liability company, Tokyo Channel 12 Production was established with the help of the Nikkei and Mainichi Broadcasting System.

In 1969 the Nikkei and MBS signed a memorandum of understanding which stipulates that Tokyo Channel 12 should share programs with Nihon Educational Television (NET, now TV Asahi). This forms a de facto alliance which lasts until 1975.

TV Tokyo logo used between 1981 and 1985. This is the first variation of the テレビ東京 wordmark styling above, which was used between 1981 and 1998, when it was replaced completely with the current logo due to controversies related to an episode of Pokémon. At its final incarnation, the wordmark is accompanied by a red-colored halo with a stylized "チュッ!" below it, placed before the wordmark.

In 1981, it was again renamed, this time to Television Tokyo Channel 12, Ltd. d/b/a TV Tokyo; the current Japanese name of the company was also assumed in the same year.

In 1983, TV Tokyo formed the Mega TON Network (now TX Network) with TV Osaka, and Aichi Television Broadcasting. The company shifted its head offices from Shiba Park to Toranomon in December 1985. On October 4, 1999, Tokyo's production company Softx was renamed to TV Tokyo MediaNet. In 2004, TV Tokyo MediaNet was shortened to MediaNet. On June 25, 2004, the company assumed its current English name of TV Tokyo Corporation. After the digital transition, the channel began broadcasting on digital channel 7. On November 7, 2016, TV Tokyo moved its headquarters to new building at Sumitomo Fudosan Roppongi Grand Tower from its old studios in Toranomon. For its broadcast of animated programs, the network originally used a Circle 7-style logo.[ citation needed] The current logo is a cartoon banana with eyes, a nose and a mouth which is bent into a 7, named Nanana (ナナナ). 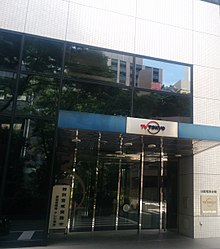