From Wikipedia
https://en.wikipedia.org/wiki/Systems_ecology
A holistic approach to the study of ecological systems 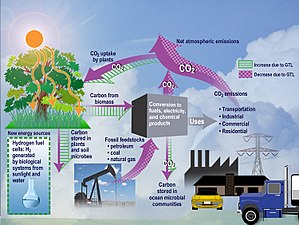 Ecological analysis of CO2 in an ecosystem

Systems ecology is an interdisciplinary field of ecology, a subset of Earth system science, that takes a holistic approach to the study of ecological systems, especially ecosystems. [1] [2] [3] Systems ecology can be seen as an application of general systems theory to ecology. Central to the systems ecology approach is the idea that an ecosystem is a complex system exhibiting emergent properties. Systems ecology focuses on interactions and transactions within and between biological and ecological systems, and is especially concerned with the way the functioning of ecosystems can be influenced by human interventions. It uses and extends concepts from thermodynamics and develops other macroscopic descriptions of complex systems.

Systems ecology seeks a holistic view of the interactions and transactions within and between biological and ecological systems. Systems ecologists realise that the function of any ecosystem can be influenced by human economics in fundamental ways. They have therefore taken an additional transdisciplinary step by including economics in the consideration of ecological-economic systems. In the words of R.L. Kitching: [4]

As a mode of scientific enquiry, a central feature of Systems Ecology is the general application of the principles of energetics to all systems at any scale. Perhaps the most notable proponent of this view was Howard T. Odum - sometimes considered the father of ecosystems ecology. In this approach the principles of energetics constitute ecosystem principles. Reasoning by formal analogy from one system to another enables the Systems Ecologist to see principles functioning in an analogous manner across system-scale boundaries. H.T. Odum commonly used the Energy Systems Language as a tool for making systems diagrams and flow charts.

The fourth of these principles, the principle of maximum power efficiency, takes central place in the analysis and synthesis of ecological systems. The fourth principle suggests that the most evolutionarily advantageous system function occurs when the environmental load matches the internal resistance of the system. The further the environmental load is from matching the internal resistance, the further the system is away from its sustainable steady state. Therefore, the systems ecologist engages in a task of resistance and impedance matching in ecological engineering, just as the electronic engineer would do.

Joanna Macy, John Seed, and others developed Naess' thesis into a branch they called experiential deep ecology. Their efforts were motivated by a need they perceived for the development of an " ecological self", which views the human ego as an integrated part of a living system that encompasses the individual. They sought to transcend altruism with a deeper self-interest based on biospherical equality beyond human chauvinism.

Earth systems engineering and management (ESEM) is a discipline used to analyze, design, engineer and manage complex environmental systems. It entails a wide range of subject areas including anthropology, engineering, environmental science, ethics and philosophy. At its core, ESEM looks to "rationally design and manage coupled human-natural systems in a highly integrated and ethical fashion"

Ecological economics is a transdisciplinary field of academic research that addresses the dynamic and spatial interdependence between human economies and natural ecosystems. Ecological economics brings together and connects different disciplines, within the natural and social sciences but especially between these broad areas. As the name suggests, the field is made up of researchers with a background in economics and ecology. An important motivation for the emergence of ecological economics has been criticism on the assumptions and approaches of traditional (mainstream) environmental and resource economics.

Ecological humanities aims to bridge the divides between the sciences and the humanities, and between Western, Eastern and Indigenous ways of knowing nature. Like ecocentric political theory, the ecological humanities are characterised by a connectivity ontology and a commitment to two fundamental axioms relating to the need to submit to ecological laws and to see humanity as part of a larger living system.

Industrial ecology is the study of industrial processes as linear (open loop) systems, in which resource and capital investments move through the system to become waste, to a closed loop system where wastes become inputs for new processes.