From Wikipedia
https://en.wikipedia.org/wiki/Synthetic_element
Chemical elements that do not occur naturally 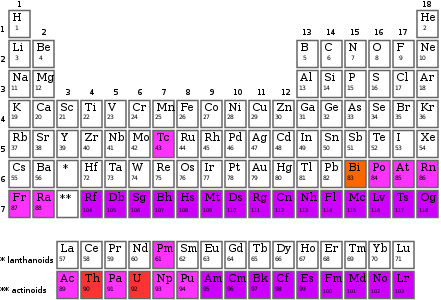 A synthetic element is one of 24 chemical elements that do not occur naturally on Earth: they have been created by human manipulation of fundamental particles in a nuclear reactor, a particle accelerator, or the explosion of an atomic bomb; thus, they are called "synthetic", "artificial", or "man-made". The synthetic elements are those with atomic numbers 95–118, as shown in purple on the accompanying periodic table: [1] these 24 elements were first created between 1944 and 2010. The mechanism for the creation of a synthetic element is to force additional protons onto the nucleus of an element with an atomic number lower than 95. All synthetic elements are unstable, but they decay at widely varying rates: their half-lives range from a few hundred microseconds to millions of years.

Five elements that were created artificially are no longer called synthetic because they were later discovered to exist in nature in trace quantities: 43Tc, 61Pm, 85At, 93Np, and 94Pu. The first, technetium Tc, was created in 1937. [2] Plutonium Pu, atomic number 94, first synthesized in 1940, is another such element. It is the element with the largest number of protons (and equivalent atomic number) to occur in nature, but it does so in such tiny quantities that it is far more practical to synthesize it. Plutonium is extremely well known due to its use in atomic bombs and nuclear reactors. [3]

No elements with an atomic number greater than 99 have any uses outside of scientific research, since they have extremely short half-lives, and thus have never been produced in large quantities.

Any elements with atomic number greater than 94 present at the formation of the earth about 4.6 billion years ago have decayed sufficiently rapidly into lighter elements relative to the age of Earth that any atoms of these elements that may have existed when the Earth formed have long since decayed. [4] [5] Atoms of synthetic elements now present on Earth are the product of atomic bombs or experiments that involve nuclear reactors or particle accelerators, via nuclear fusion or neutron absorption. [6]

Atomic mass for natural elements is based on weighted average abundance of natural isotopes that occur in Earth's crust and atmosphere. For synthetic elements, the isotope depends on the means of synthesis, so the concept of natural isotope abundance has no meaning. Therefore, for synthetic elements the total nucleon count ( protons plus neutrons) of the most stable isotope, i.e. the isotope with the longest half-life—is listed in brackets as the atomic mass.

The first element that was synthesised, rather than being discovered in nature, was technetium in 1937. [7] This discovery filled a gap in the periodic table, and the fact that no stable isotopes of technetium exist explains its natural absence on Earth (and the gap). [8] With the longest-lived isotope of technetium, 97Tc, having a 4.21-million-year half-life, [9] no technetium remains from the formation of the Earth. [10] [11] Only minute traces of technetium occur naturally in the Earth's crust—as a spontaneous fission product of 238U or by neutron capture in molybdenum ores—but technetium is present naturally in red giant stars. [12] [13] [14] [15]

The first purely synthetic element to be made was curium, synthesized in 1944 by Glenn T. Seaborg, Ralph A. James, and Albert Ghiorso by bombarding plutonium with alpha particles. [16] [17]

The synthesis of americium, berkelium, and californium followed soon. Einsteinium and fermium were created by a team of scientists led by Albert Ghiorso in 1952 while studying the radioactive debris from the detonation of the first hydrogen bomb. [18] The isotopes synthesised were einsteinium-253, with a half-life of 20.5 days, and fermium-255, with a half-life of about 20 hours. The creation of mendelevium, nobelium, and lawrencium followed.

During the height of the Cold War, teams from the Soviet Union and the United States independently created rutherfordium and dubnium. The naming and credit for synthesis of these elements remained unresolved for many years, but eventually shared credit was recognized by IUPAC/ IUPAP in 1992. In 1997, IUPAC decided to give dubnium its current name honoring the city of Dubna where the Russian team worked since American-chosen names had already been used for many existing synthetic elements, while the name rutherfordium (chosen by the American team) was accepted for element 104.

Meanwhile, the American team had created seaborgium, and the next six elements had been created by a German team: bohrium, hassium, meitnerium, darmstadtium, roentgenium, and copernicium. Element 113, nihonium, was created by a Japanese team; the last five known elements, flerovium, moscovium, livermorium, tennessine, and oganesson, were created by Russian–American collaborations and complete the seventh row of the periodic table.

The following elements do not occur naturally on Earth. All are transuranium elements and have atomic numbers of 95 and higher.

Other elements usually produced through synthesis

All elements with atomic numbers 1 through 94 occur naturally at least in trace quantities, but the following elements are often produced through synthesis. Technetium, promethium, astatine, neptunium, and plutonium were discovered through synthesis before being found in nature.