Survey of Palestine 1942–1958 1–100,000 Topographical maps. Click on each blue link to see the individual original maps in high resolution. The italicized links represent post-1948 maps, printed by the successor organization.

The survey department was established in 1920 in Jaffa, and moved to the outskirts of Tel Aviv in 1931. [1] It established the Palestine grid. [2]

In early 1948, temporary Directors General of the Survey Department were appointed for each of the expected "Jewish State" and "Arab State" under the terms of the United Nations Partition Plan for Palestine, and the pre-existing files and maps were to be shared. [3] However, during the 1948 Arab–Israeli War, British lorries delivering the “Arab state” portion of their maps were diverted back to Tel Aviv. [4] Today, the historical maps are held at the Survey of Israel, the Hebrew University of Jerusalem, the Ministry of Agriculture and Rural Development and Israeli Ministry of Defense archives. [4]

The maps produced by the survey have been widely used in "Palestinian refugee cartography" by scholars documenting the 1948 Palestinian exodus; [5] notably in Salman Abu Sitta's Atlas of Palestine and Walid Khalidi's All That Remains. [5] [6] In 2019 the maps were used as the basis for Palestine Open Maps, supported by the Bassel Khartabil Free Culture Fellowship. [7]

Map showing the amount of surveyed land by 1947; the area corresponds closely to the land allotted to the "Jewish State" in the United Nations Partition Plan for Palestine. 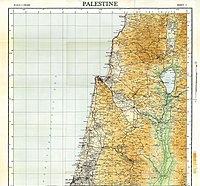 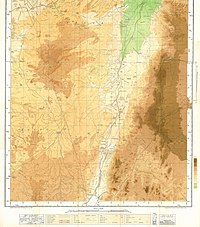 Prior to the beginning of the Mandate for Palestine, the British had carried out two significant surveys of the region: the PEF Survey of Palestine between 1872 and 1880, and some small scale maps developed by General Allenby's Royal Engineers for the 1915–18 Sinai and Palestine campaign. [8] [9]

Immediately following the start of the Occupied Enemy Territory Administration, the Zionist Organization began to pressure the British authorities to immediately begin the cadastral survey of the land, in order to facilitate Jewish land purchase in Palestine. [10] [11] The Zionist Organization wanted to use the results of the survey work to identify land open for Jewish settlement and the strategies needed to acquire it, whether it was privately owned, state land or other types of land. [12] The Survey was initially resisted by the Palestinian Arab population, who considered it to be an attempt to sell their land from underneath them, given the differences between Ottoman land laws, Customary land law and the new system which required "absolute proof of ownership". [10]

In 1940 the department no longer had responsibility for adjudicating land settlement claims, and began to focus fully on the survey work. [16] The February 1940 Land Transfer Regulations had divided Palestine into three regions with different restrictions on land sales applying to each. In Zone "A," which included the hill-country of Judea as a whole, certain areas in the Jaffa sub-District, and in the Gaza District, and the northern part of the Beersheba sub-District, new agreements for sale of land other than to a Palestinian Arab were forbidden without the High Commissioner's permission. In Zone "B," which included the Jezreel Valley, eastern Galilee, a parcel of coastal plain south of Haifa, a region northeast of the Gaza District, and the southern part of the Beersheba sub-District, sale of land by a Palestinian Arab was forbidden except to a Palestinian Arab with similar exceptions. In the "free zone," which consisted of Haifa Bay, the coastal plain from Zikhron Ya'akov to Yibna, and the neighbohood of Jerusalem, there were no restrictions. The reason given for the regulations was that the Mandatory was required to "ensur[e] that the rights and positions of other sections of the population are not prejudiced," and an assertion that "such transfers of land must be restricted if Arab cultivators are to maintain their existing standard of life and a considerable landless Arab population is not soon to be created" [17]

By the 1947–1949 Palestine war, the Survey of Palestine had finalized topographical maps for all of the country except the southern Negev, [18] although it had confirmed land title in less than 20% of the country, specifically in the areas of Jewish settlement. [4] A cadastral survey was not carried out in the areas which would become the West Bank until after 1948; a situation which caused significant challenges in subsequent years. [19] [20]

Land classification as prescribed in 1940

In 1937, then Commissioner of Lands and Surveys, Lieutenant Colonel F. J. Salmon, described the importance of the department's work with respect to allowing land purchases: [23]

In the Ottoman days, a title to a piece of land in Palestine was a very vague document. There was no survey, recording shape, area or position; the description was usually, to say the least of it, ambiguous, and the extent which was the gauge for taxation, was almost invariably falsified to save the pocket of the owner. Big blocks were, and in areas where there has been no land settlement, still are, shared by large numbers of owners who have no defined boundaries and who often alter the position of their plots from year to year… To purchase land from a title owner, or worse still, from an occupier who had no title, was a very uncertain business, and often still is. The difficulty, however, is now being solved, though very slowly, by Land Settlement… The claims are recorded and examined by Palestinian Assistant Settlement Officers, while cases of dispute are heard by British Land Settlement Officers… Even in areas that are not under Settlement, a land-owner can apply for an authoritative registration of title on a modern survey, but if there is a dispute, this has to be settled by the Land Court, a much slower, more expensive and laborious proceeding than an investigation and judgment by a Settlement Officer.

The headquarters of the Survey Department of Palestine in 1930

The first headquarters — in early 1920 — were based in Gaza City; they moved to Jaffa just a few months later. [34] On 1 January 1931 a purpose-built building was opened to house the department at the southern end of a 30-acre (12 ha) plot near the German Templar colony on the outskirts of Tel Aviv (the location can be seen on this 1930 map). [35] The location of the headquarters in the coastal plain favored for Zionist settlement, together with the fact that all other offices of the Mandate Government were in Jerusalem, have been said to emphasize "the strong link between the cadastral survey of Palestine and Zionist motives". [36] Proposals to move the office to Jerusalem were raised in 1925, 1928 and 1935, but to no avail. [37] [38]

1945 maps of Jerusalem and environs